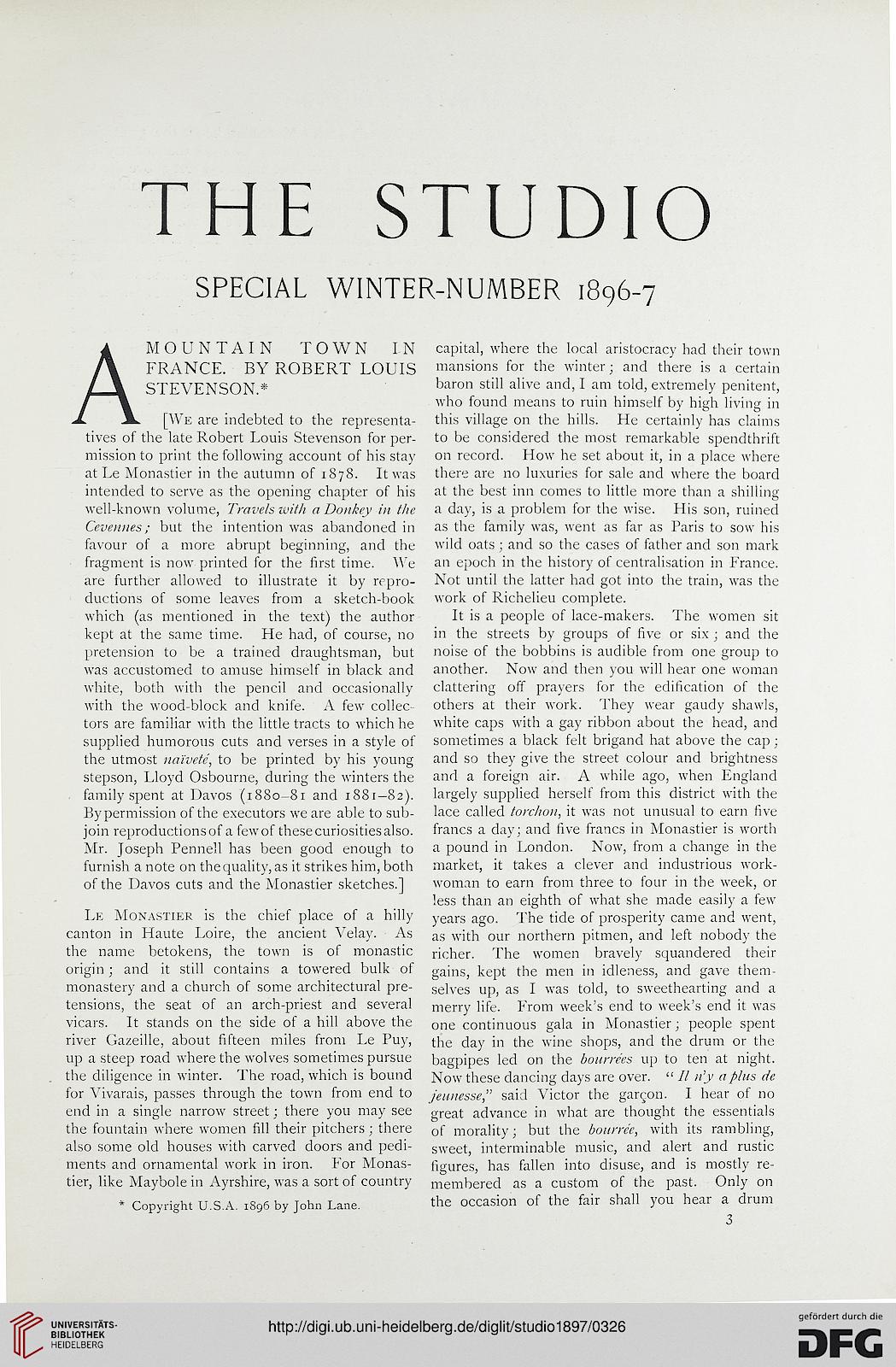 MOUNTAIN TOWN IN capital, where the local aristocracy had their town

FRANCE. BY ROBERT LOUIS mansions for the winter; and there is a certain

STEVENSON.* baron still alive and, I am told, extremely penitent,

who found means to ruin himself by high living in

[We are indebted to the representa- this village on the hills. He certainly has claims

mission to print the following account of his stay on record. How he set about it, in a place where

at Le Monastier in the autumn of 1878. It was there are no luxuries for sale and where the board

well-known volume, Travels ivith a Donkey in the a day, is a problem for the wise. His son, ruined

Cevennes; but the intention was abandoned in as the family was, went as far as Paris to sow his

favour of a more abrupt beginning, and the wild oats ; and so the cases of father and son mark

fragment is now printed for the first time. We an epoch in the history of centralisation in France,

are further allowed to illustrate it by rcpro- Not until the latter had got into the train, was the

ductions of some leaves from a sketch-book work of Richelieu complete.

which (as mentioned in the text) the author It is a people of lace-makers. The women sit

kept at the same time. He had, of course, no in the streets by groups of five or six ; and the

pretension to be a trained draughtsman, but noise of the bobbins is audible from one group to

was accustomed to amuse himself in black and another. Now and then you will hear one woman

white, both with the pencil and occasionally clattering off prayers for the edification of the

with the wood-block and knife. A few collec others at their work. They wear gaudy shawls,

tors are familiar with the little tracts to which he white caps with a gay ribbon about the head, and

supplied humorous cuts and verses in a style of sometimes a black felt brigand hat above the cap ;

the utmost naivete, to be printed by his young and so they give the street colour and brightness

stepson, Lloyd Osbourne, during the winters the and a foreign air. A while ago, when England

Bypermission of the executors we are able to sub- lace called torchon, it was not unusual to earn five

join reproductions of a few of thesecuriositiesalso. francs a day; and five francs in Monastier is worth

Mr. Joseph Pennell has been good enough to a pound in London. Now, from a change in the

furnish a note on the quality, as it strikes him, both market, it takes a clever and industrious work-

of the Davos cuts and the Monastier sketches.] woman to earn from three to four in the week, or

less than an eighth of what she made easily a few
Le Monastier is the chief place of a hilly years ago. The tide of prosperity came and went,
canton in Haute Loire, the ancient Velay. As as wjth our northern pitmen, and left nobody the
the name betokens, the town is of monastic richer. The women bravely squandered their
origin ; and it still contains a towered bulk of gains, kept the men in idleness, and gave them-
monastery and a church of some architectural pre- selves up, as I was told, to sweethearting and a
tensions, the seat of an arch-priest and several merry life. From week's end to week's end it was
vicars. It stands on the side of a hill above the one continuous gala in Monastier; people spent
river Gazeille, about fifteen miles from Le Puy, the day in the wine shops, and the drum or the
up a steep road where the wolves sometimes pursue bagpipes led on the bourrees up to ten at night,
the diligence in winter. The road, which is bound Now these dancing days are over. " // ny a plus dc
for Vivarais, passes through the town from end to feunesse," said Victor the garcon. I hear of no
end in a single narrow street; there you may see great advance in what are thought the essentials
the fountain where women fill their pitchers ; there 0f morality ; but the bourne, with its rambling,
also some old houses with carved doors and pedi- sweet, interminable music, and alert and rustic
ments and ornamental work in iron. For Monas- figures, has fallen into disuse, and is mostly re-
tier, like Maybole in Ayrshire, was a sort of country membered as a custom of the past. Only on
* Copyright U.S.A. 1896 by John Lane. the occasion of the fair shall you hear a drum