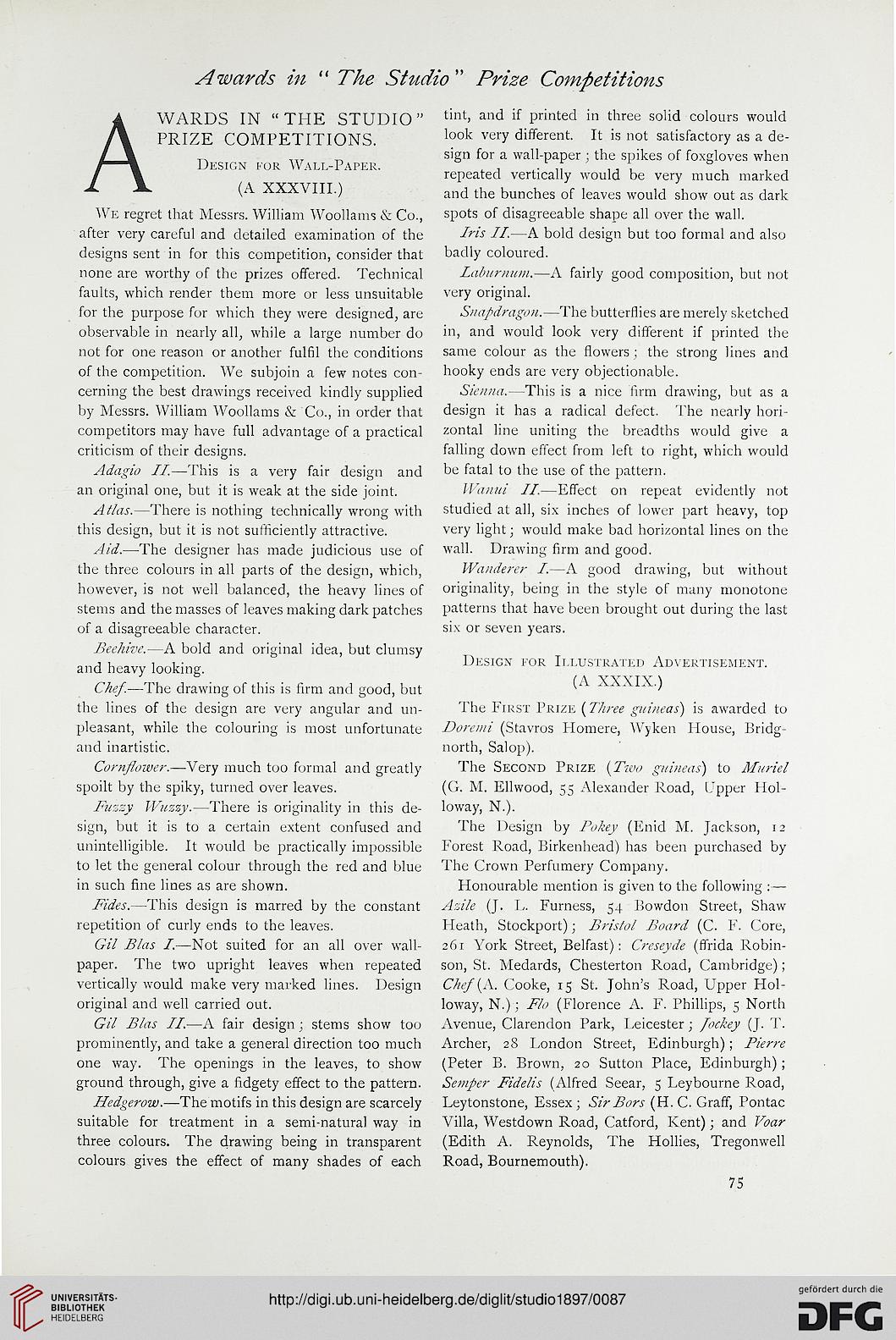 PRIZE COMPETITIONS very different. It is not satisfactory as a de-
sign for a wall-paper ; the spikes of foxgloves when

(A XXXVIII.) anc[ tne bunches of leaves would show out as dark

We regret that Messrs. William Woollams & Co., spots of disagreeable shape all over the wall,

designs sent in for this competition, consider that badly coloured.

none are worthy of the prizes offered. Technical laburnum.—A fairly good composition, but not

faults, which render them more or less unsuitable very original.

for the purpose for which they were designed, are Snapdragon.—The butterflies are merely sketched

observable in nearly all, while a large number do in, and would look very different if printed the

not for one reason or another fulfil the conditions same colour as the flowers ; the strong lines and

of the competition. We subjoin a few notes con- hooky ends are very objectionable,

cerning the best drawings received kindly supplied Sienna.—This is a nice firm drawing, but as a

by Messrs. William Woollams & Co., in order that design it has a radical defect. The nearly hori-

criticism of their designs. falling down effect from left to right, which would

Adagio II.—This is a very fair design and be fatal to the use of the pattern,

an original one, but it is weak at the side joint. Wanui II.—Effect on repeat evidently not

Atlas.—There is nothing technically wrong with studied at all, six inches of lower part heavy, top

this design, but it is not sufficiently attractive. very light; would make bad horizontal lines on the

Aid.—The designer has made judicious use of wall. Drawing firm and good,

the three colours in all parts of the design, which, Wanderer I.—A good drawing, but without

however, is not well balanced, the heavy lines of originality, being in the style of many monotone

of a disagreeable character. six or seven years.

Chef.—The drawing of this is firm and good, but "

pleasant, while the colouring is most unfortunate Doremi (Stavros Homere, Wyken House, Bridg-

Cornflower.—Very much too formal and greatly The Second Prize {Two guineas) to Muriel

sign, but it is to a certain extent confused and The Design by Pokey (Enid M. Jackson, 12

unintelligible. It would be practically impossible Forest Road, Birkenhead) has been purchased by

to let the general colour through the red and blue The Crown Perfumery Company,

in such fine lines as are shown. Honourable mention is given to the following :—

prominently, and take a general direction too much Archer, 28 London Street, Edinburgh); Pierre

one way. The openings in the leaves, to show (Peter B. Brown, 20 Sutton Place, Edinburgh) ;

ground through, give a fidgety effect to the pattern. Semper Fidelis (Alfred Seear, 5 Leybourne Road,

suitable for treatment in a semi-natural way in Villa, Westdown Road, Catford, Kent); and Voar

three colours. The drawing being in transparent (Edith A. Reynolds, The Hollies, Tregonwell

colours gives the effect of many shades of each Road, Bournemouth).