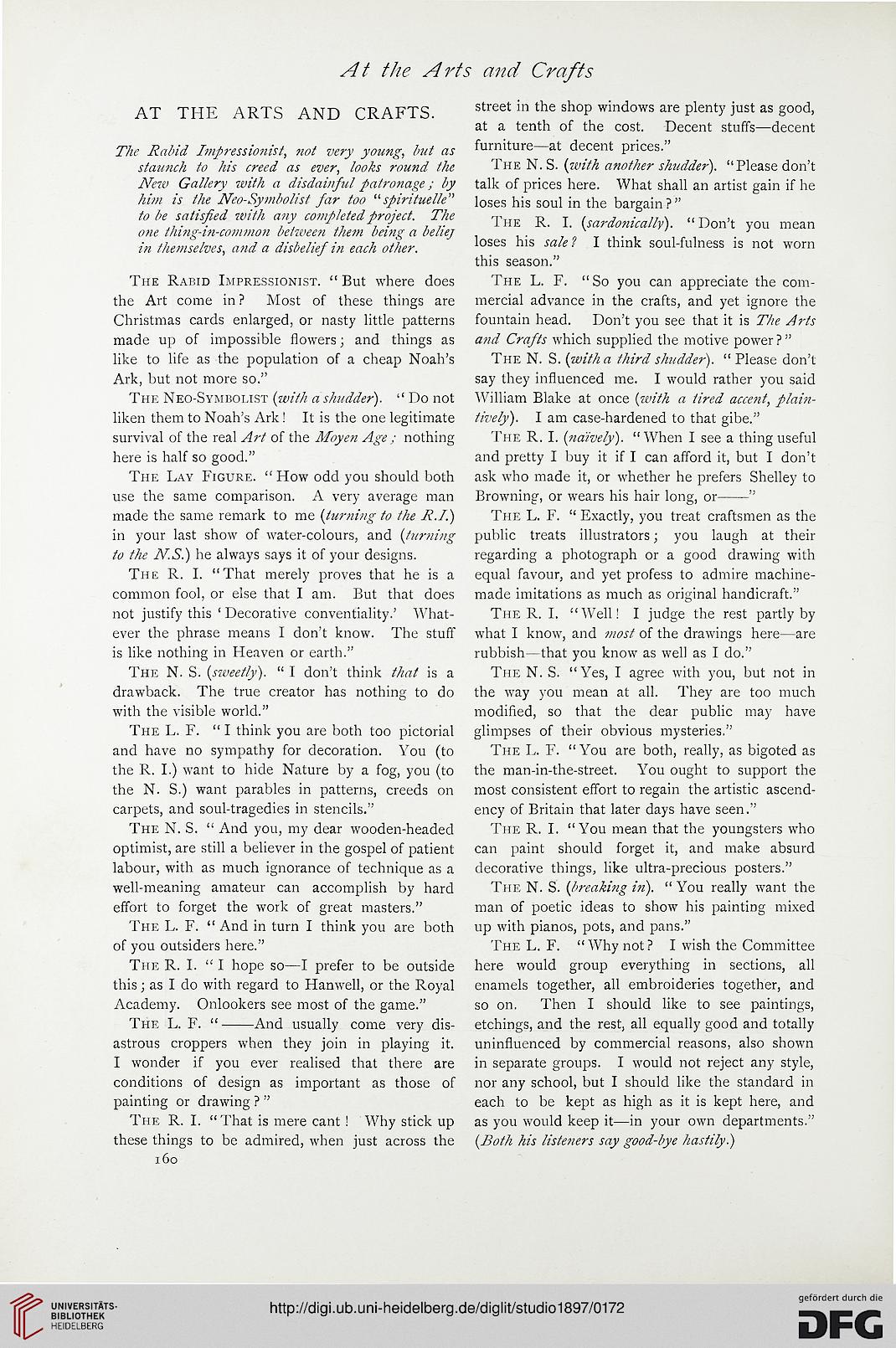 Information about OCR text
At the Arts and Crafts

AT THE ARTS AND CRAFTS.

The Rabid Impressionist, not very young, but as
staunch to his creed as ever, looks round the
New Gallery with a disdainful patronage; by
him is the Neo-Symbolist far too "spirituelfe"
to be satisfied with any completed project. The
one thing-in-common between them being a beliej
in themselves, and a disbelief in each other.

The Rabid Impressionist. "But where does
the Art come in ? Most of these things are
Christmas cards enlarged, or nasty little patterns
made up of impossible flowers; and things as
like to life as the population of a cheap Noah's
Ark, but not more so."

The Neo-Symbolist (with a shudder). " Do not
liken them to Noah's Ark! It is the one legitimate
survival of the real Art of the Moyen Age ; nothing
here is half so good."

The Lay Figure. " How odd you should both
use the same comparison. A very average man
made the same remark to me (turning to the R.7.)
in your last show of water-colours, and (turning
to the N.S.) he always says it of your designs.

The R. I. "That merely proves that he is a
common fool, or else that I am. But that does
not justify this ' Decorative conventiality.' What-
ever the phrase means I don't know. The stuff
is like nothing in Heaven or earth."

The N. S. (sweetly). " I don't think that is a
drawback. The true creator has nothing to do
with the visible world."

The L. F. " I think you are both too pictorial
and have no sympathy for decoration. You (to
the R. I.) want to hide Nature by a fog, you (to
the N. S.) want parables in patterns, creeds on
carpets, and soul-tragedies in stencils."

The N. S. " And you, my dear wooden-headed
optimist, are still a believer in the gospel of patient
labour, with as much ignorance of technique as a
well-meaning amateur can accomplish by hard
effort to forget the work of great masters."

The L. F. " And in turn I think you are both
of you outsiders here."

The R. I. " I hope so—I prefer to be outside
this; as I do with regard to Hanwell, or the Royal
Academy. Onlookers see most of the game."

The L. F. "-And usually come very dis-
astrous croppers when they join in playing it.
I wonder if you ever realised that there are
conditions of design as important as those of
painting or drawing ? "

The R. I. "That is mere cant ! Why stick up
these things to be admired, when just across the
160

street in the shop windows are plenty just as good,
at a tenth of the cost. Decent stuffs—decent
furniture—at decent prices."

The N. S. (with another shudder). "Please don't
talk of prices here. What shall an artist gain if he
loses his soul in the bargain ? "

The R. I. (sardonically). " Don't you mean
loses his sale? I think soul-fulness is not worn
this season."

The L. F. "So you can appreciate the com-
mercial advance in the crafts, and yet ignore the
fountain head. Don't you see that it is The Arts
and Crafts which supplied the motive power ? "

The N. S. (with a third shudder). " Please don't
say they influenced me. I would rather you said
William Blake at once (with a tired accent, plain-
tively). I am case-hardened to that gibe."

The R. I. (naively). "When I see a thing useful
and pretty I buy it if I can afford it, but I don't
ask who made it, or whether he prefers Shelley to
Browning, or wears his hair long, or-"

The L. F. " Exactly, you treat craftsmen as the
public treats illustrators; you laugh at their
regarding a photograph or a good drawing with
equal favour, and yet profess to admire machine-
made imitations as much as original handicraft."

The R. I. "Well! I judge the rest partly by
what I know, and most of the drawings here—are
rubbish—that you know as well as I do."

The N. S. "Yes, I agree with you, but not in
the way you mean at all. They are too much
modified, so that the dear public may have
glimpses of their obvious mysteries."

The L. F. " You are both, really, as bigoted as
the man-in-the-street. You ought to support the
most consistent effort to regain the artistic ascend-
ency of Britain that later days have seen."

The R. I. "You mean that the youngsters who
can paint should forget it, and make absurd
decorative things, like ultra-precious posters."

The N. S. (breaking in). " You really want the
man of poetic ideas to show his painting mixed
up with pianos, pots, and pans."

The L. F. "Why not? I wish the Committee
here would group everything in sections, all
enamels together, all embroideries together, and
so on. Then I should like to see paintings,
etchings, and the rest, all equally good and totally
uninfluenced by commercial reasons, also shown
in separate groups. I would not reject any style,
nor any school, but I should like the standard in
each to be kept as high as it is kept here, and
as you would keep it—in your own departments."
(Both his listeners say good-bye hastily.)