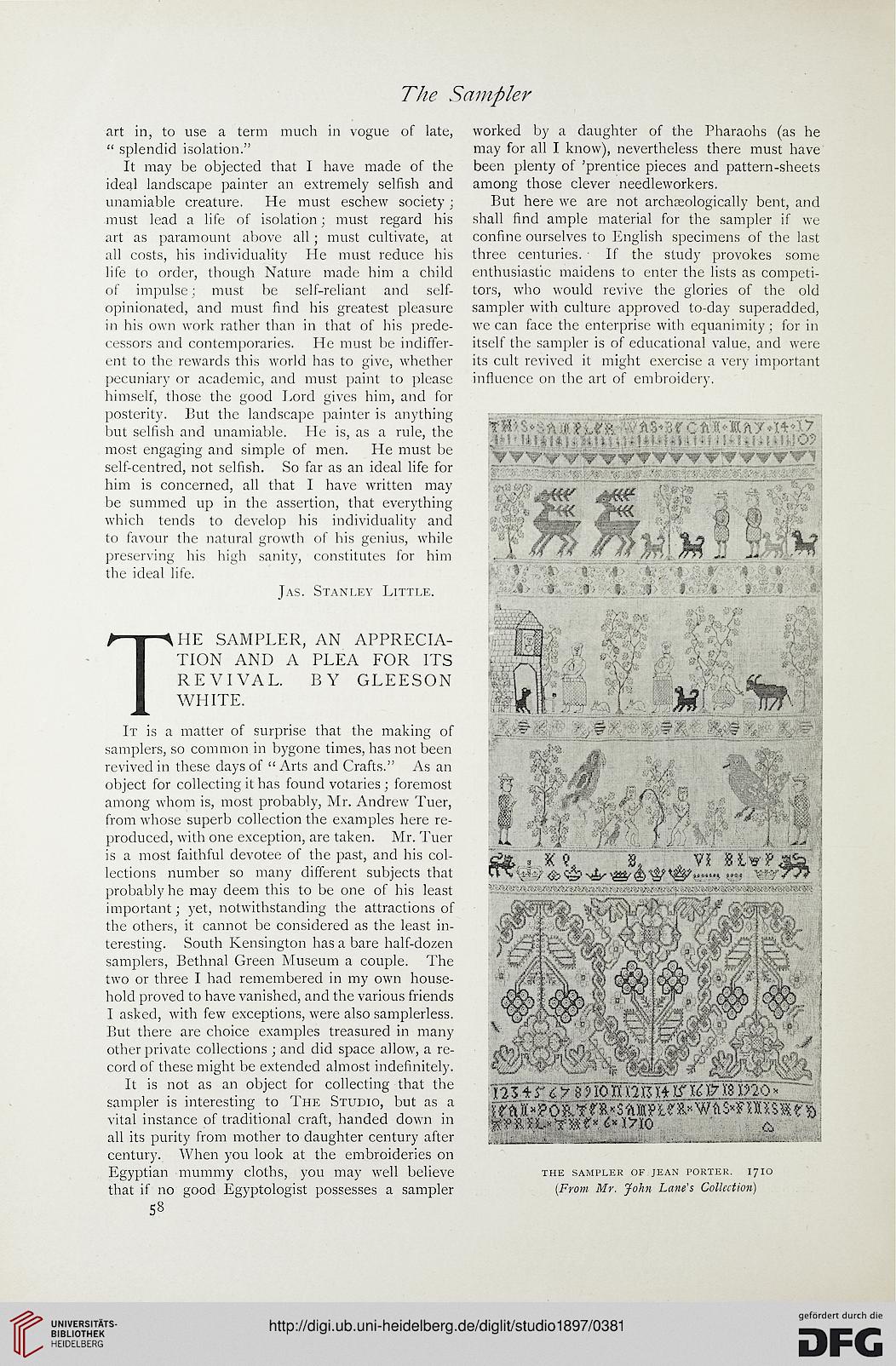 Information about OCR text
The Sampler

art in, to use a term much in vogue of late, worked by a daughter of the Pharaohs (as he

" splendid isolation." may for all I know), nevertheless there must have

ideal landscape painter an extremely selfish and among those clever needleworkers.
unamiable creature. He must eschew society ; But here we are not archseologically bent, and

must lead a life of isolation ; must regard his shall find ample material for the sampler if we

art as paramount above all ; must cultivate, at confine ourselves to English specimens of the last

all costs, his individuality He must reduce his three centuries. ■ If the study provokes some

life to order, though Nature made him a child enthusiastic maidens to enter the lists as competi-

of impulse ; must be self-reliant and self- tors, who would revive the glories of the old

opinionated, and must find his greatest pleasure sampler with culture approved to-day superadded,

in his own work rather than in that of his predc- we can face the enterprise with equanimity ; for in

cessors and contemporaries. He must be indiffer- itself the sampler is of educational value, and were

ent to the rewards this world has to give, whether its cult revived it might exercise a very important

pecuniary or academic, and must paint to please influence on the art of embroidery,
himself, those the good Lord gives him, and for

but selfish and unamiable. He is, as a rule, the ^^RH'S
most engaging and simple of men. He must be ^ifWw'l ■

self-centred, not selfish. So far as an ideal life for

him is concerned, all that I have written may f :

It is a matter of surprise that the making of
samplers, so common in bygone times, has not been
revived in these days of " Arts and Crafts." As an
object for collecting it has found votaries ; foremost
among whom is, most probably, Mr. Andrew Tuer,
from whose superb collection the examples here re-
produced, with one exception, are taken. Mr. Tuer

is a most faithful devotee of the past, and his cob gh* % q g
lections number so many different subjects that WMjS?^^W^Nl**^ v
probably he may deem this to be one of his least
important; yet, notwithstanding the attractions of
the others, it cannot be considered as the least in-
teresting. South Kensington has a bare half-dozen
samplers, Bethnal Green Museum a couple. The
two or three I had remembered in my own house-
hold proved to have vanished, and the various friends
I asked, with few exceptions, were also samplerless.
But there are choice examples treasured in many
other private collections ; and did space allow, a re-
cord of these might be extended almost indefinitely. ^fJK^ '^T^&^^ST^' J

sampler is interesting to The Studio but as a im^0K^Smi^WKMmm'%
vital instance' ol traditional craft, handed down m ^PfiSL^Bf* 1710
all its purity from mother to daughter century after
century. When you look at the embroideries on

Egyptian mummy cloths, you may well believe the sampler of jean porter. 1710

that if no good Egyptologist possesses a sampler (From Mr. John Lane's Collection)