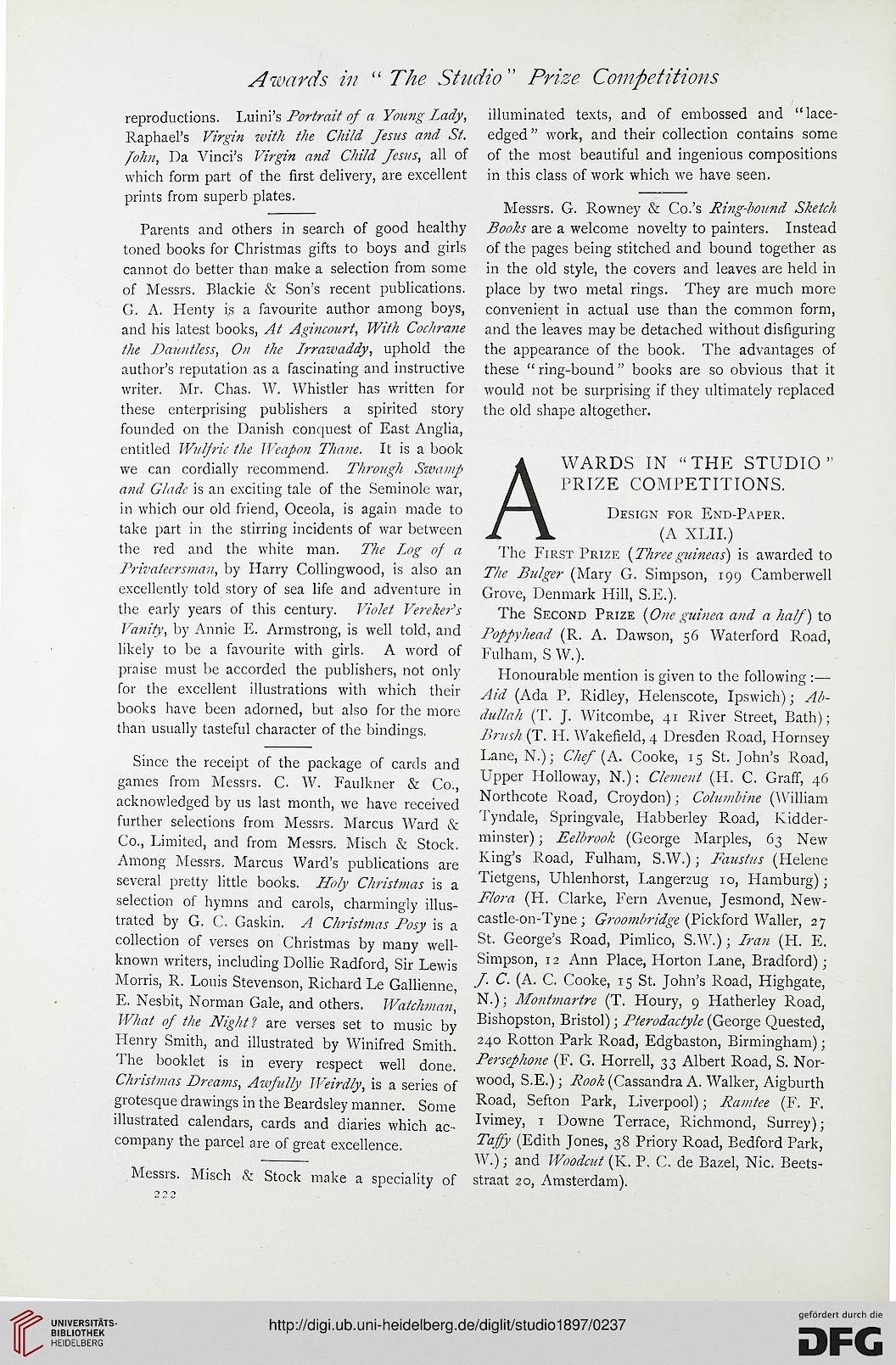 reproductions. Luini's Portrait of a Young Lady, illuminated texts, and of embossed and "lace-
Raphael's Virgin with the Child Jesus and St. edged" work, and their collection contains some
John, Da Vinci's Virgin and Child Jesus, all of of the most beautiful and ingenious compositions
which form part of the first delivery, are excellent in this class of work which we have seen,
prints from superb plates. Messrs. G. Rowney & Co.'s Ring-bound Sketch
Parents and others in search of good healthy Books are a welcome novelty to painters. Instead
toned books for Christmas gifts to boys and girls of the pages being stitched and bound together as
cannot do better than make a selection from some in the old style, the covers and leaves are held in
of Messrs. Blackie & Son's recent publications, place by two metal rings. They are much more
G. A. Henty is a favourite author among boys, convenient in actual use than the common form,
and his latest books, At Agincourt, With Cochrane and the leaves may be detached without disfiguring
the Dauntless, On the Irrawaddy, uphold the the appearance of the book. The advantages of
author's reputation as a fascinating and instructive these " ring-bound " books are so obvious that it
writer. Mr. Chas. W. Whistler has written for would not be surprising if they ultimately replaced
these enterprising publishers a spirited story the old shape altogether,
founded on the Danish conquest of East Anglia,

entitled Wulfric the Weapon Thane. It is a book _

we can cordially recommend. Through Swamp A WARDS IN "THE STUDIO"

and Glade is an exciting tale of the Seminole war, /\ PRIZE COMPETITIONS.

in which our old friend, Oceola, is again made to / % Design for End-Paper.

take part in the stirring incidents of war between j£ ^ (A XLII.)

the red and the white man. The Log 0/ a The First Prize (Threeguineas) is awarded to

Privateersman, by Harry Collingwood, is also an The Bulger (Mary G. Simpson, 199 Camberwell

the early years of this century. Violet Vereker's The Second Prize {One guinea and a ha J) to

likely to be a favourite with girls. A word of Fulham, S W.).

praise must be accorded the publishers, not only Honourable mention is given to the following :—

for the excellent illustrations with which their Aid (Ada P. Ridley, Helenscote, Ipswich); Ab-

books have been adorned, but also for the more dullah (T. J. Witcombe, 41 River Street, Bath);

acknowledged by us last month, we have received Northcote Road' Croydon) ; Columbine (William

What of the Night ? are verses set to music by BisnoPston> Bristol) j Pterodactyle (George Quested,

The booklet is in every respect well done. Persephone (F. G. Horrell, 33 Albert Road, S. Nor-