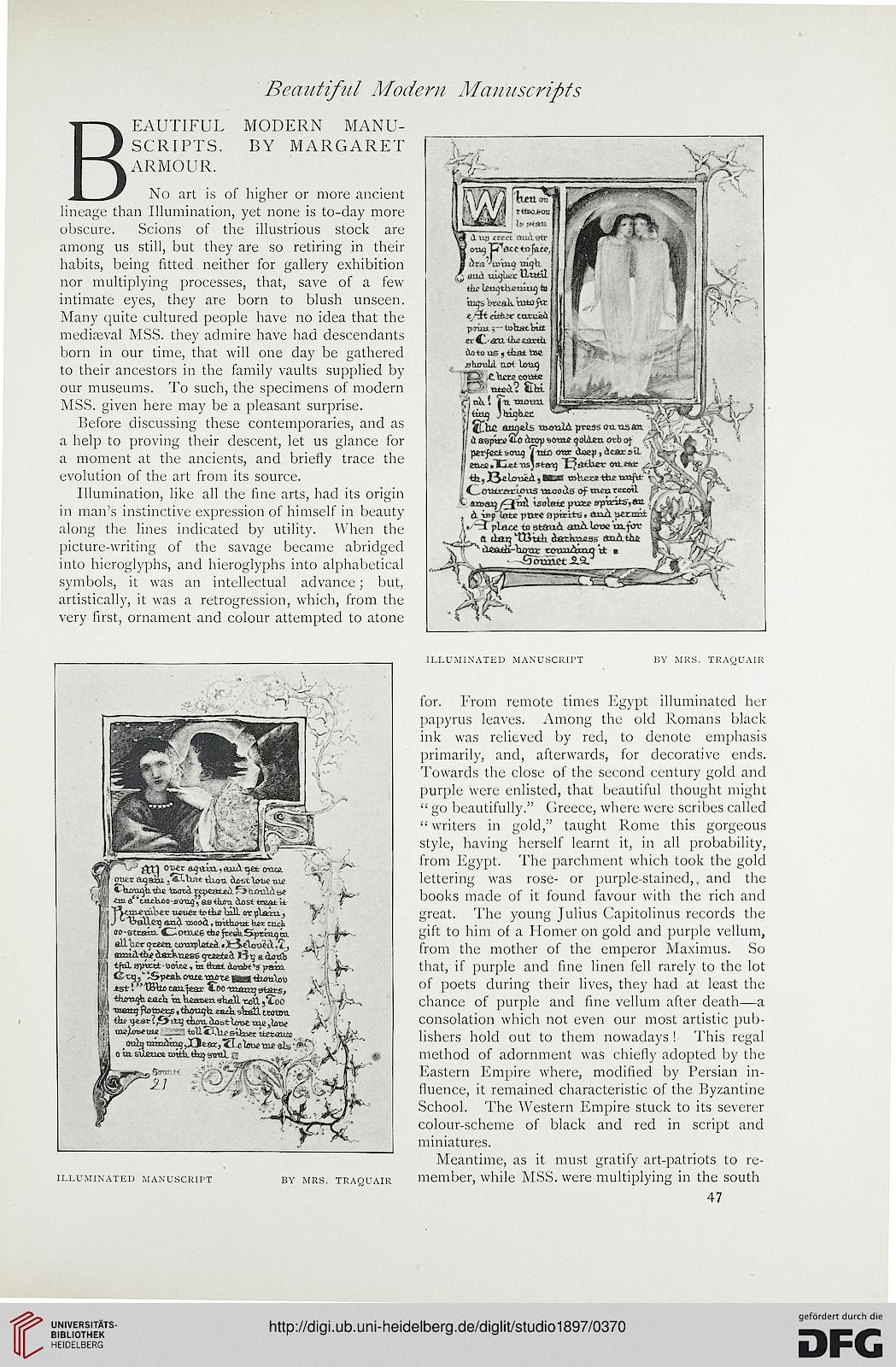 No art is of higher or more ancient

lineage than Illumination, yet none is to-day more
obscure. Scions of the illustrious stock are
among us still, but they are so retiring in their
habits, being fitted neither for gallery exhibition
nor multiplying processes, that, save of a few
intimate eyes, they are born to blush unseen.
Many quite cultured people have no idea that the
mediaeval MSS. they admire have had descendants
born in our time, that will one day be gathered
to their ancestors in the family vaults supplied by
our museums. To such, the specimens of modern
MSS. given here may be a pleasant surprise.

Before discussing these contemporaries, and as
a help to proving their descent, let us glance for
a moment at the ancients, and briefly trace the
evolution of the art from its source.

Illumination, like all the fine arts, had its origin
in man's instinctive expression of himself in beauty
along the lines indicated by utility. When the
picture-writing of the savage became abridged
into hieroglyphs, and hieroglyphs into alphabetical
symbols, it was an intellectual advance; but,
artistically, it was a retrogression, which, from the
very first, ornament and colour attempted to atone

for. From remote times Egypt illuminated her
papyrus leaves. Among the old Romans black
ink was relieved by red, to denote emphasis
primarily, and, afterwards, for decorative ends.
Towards the close of the second century gold and
purple were enlisted, that beautiful thought might
" go beautifully." Greece, where were scribes called
" writers in gold," taught Rome this gorgeous
style, having herself learnt it, in all probability,
from Egypt. The parchment which took the gold
lettering was rose- or purple-stained,. and the
books made of it found favour with the rich and
great. The young Julius Capitolinus records the
gift to him of a Homer on gold and purple vellum,
from the mother of the emperor Maximus. So
that, if purple and fine linen fell rarely to the lot
of poets during their lives, they had at least the
chance of purple and fine vellum after death—a
consolation which not even our most artistic pub-
lishers hold out to them nowadays ! This regal
method of adornment was chiefly adopted by the
Eastern Empire where, modified by Persian in-
fluence, it remained characteristic of the Byzantine
School. The Western Empire stuck to its severer
colour-scheme of black and red in script and
miniatures.

Meantime, as it must gratify art-patriots to re-
member, while MSS. were multiplying in the south