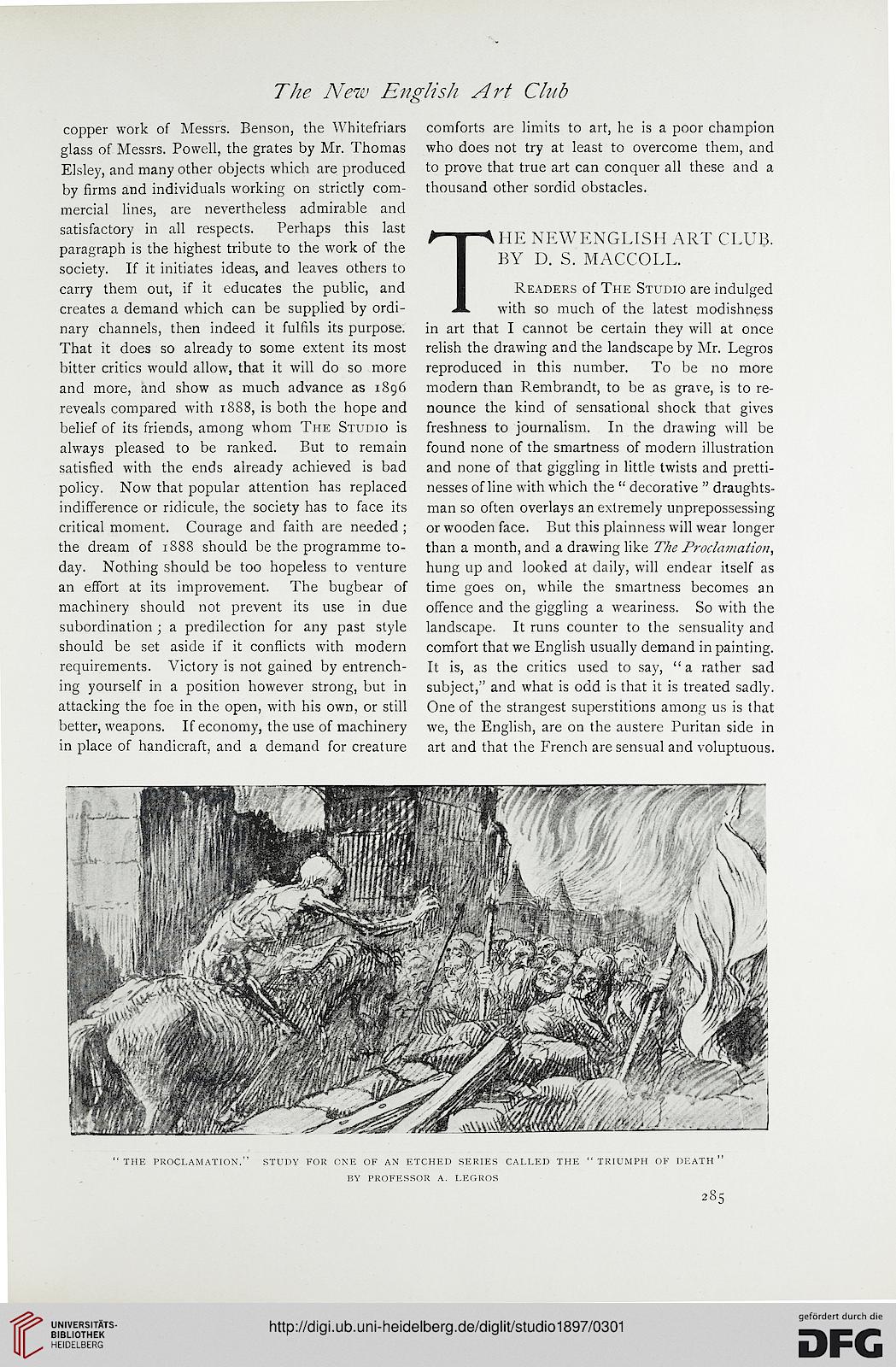 copper work of Messrs. Benson, the Whitefriars
glass of Messrs. Powell, the grates by Mr. Thomas
Elsley, and many other objects which are produced
by firms and individuals working on strictly com-
mercial lines, are nevertheless admirable and
satisfactory in all respects. Perhaps this last
paragraph is the highest tribute to the work of the
society. If it initiates ideas, and leaves others to
carry them out, if it educates the public, and
creates a demand which can be supplied by ordi-
nary channels, then indeed it fulfils its purpose.
That it does so already to some extent its most
bitter critics would allow, that it will do so more
and more, and show as much advance as 1896
reveals compared with 1888, is both the hope and
belief of its friends, among whom The Studio is
always pleased to be ranked. But to remain
satisfied with the ends already achieved is bad
policy. Now that popular attention has replaced
indifference or ridicule, the society has to face its
critical moment. Courage and faith are needed ;
the dream of 1888 should be the programme to-
day. Nothing should be too hopeless to venture
an effort at its improvement. The bugbear of
machinery should not prevent its use in due
subordination ; a predilection for any past style
should be set aside if it conflicts with modern
requirements. Victory is not gained by entrench-
ing yourself in a position however strong, but in
attacking the foe in the open, with his own, or still
better, weapons. If economy, the use of machinery
in place of handicraft, and a demand for creature

comforts are limits to art, he is a poor champion
who does not try at least to overcome them, and
to prove that true art can conquer all these and a
thousand other sordid obstacles.

in art that I cannot be certain they will at once
relish the drawing and the landscape by Mr. Legros
reproduced in this number. To be no more
modern than Rembrandt, to be as grave, is to re-
nounce the kind of sensational shock that gives
freshness to journalism. In the drawing will be
found none of the smartness of modern illustration
and none of that giggling in little twists and pretti-
nesses of line with which the " decorative " draughts-
man so often overlays an extremely unprepossessing
or wooden face. But this plainness will wear longer
than a month, and a drawing like The Proclamation,
hung up and looked at daily, will endear itself as
time goes on, while the smartness becomes an
offence and the giggling a weariness. So with the
landscape. It runs counter to the sensuality and
comfort that we English usually demand in painting.
It is, as the critics used to say, " a rather sad
subject," and what is odd is that it is treated sadly.
One of the strangest superstitions among us is that
we, the English, are on the austere Puritan side in
art and that the French are sensual and voluptuous.

THE PROCLAMATION." STUDY FOR ONE OF AN ETCHED SERIES CALLED THE "TRIUMPH OF DEATH"

BY PROFESSOR A. LEGROS