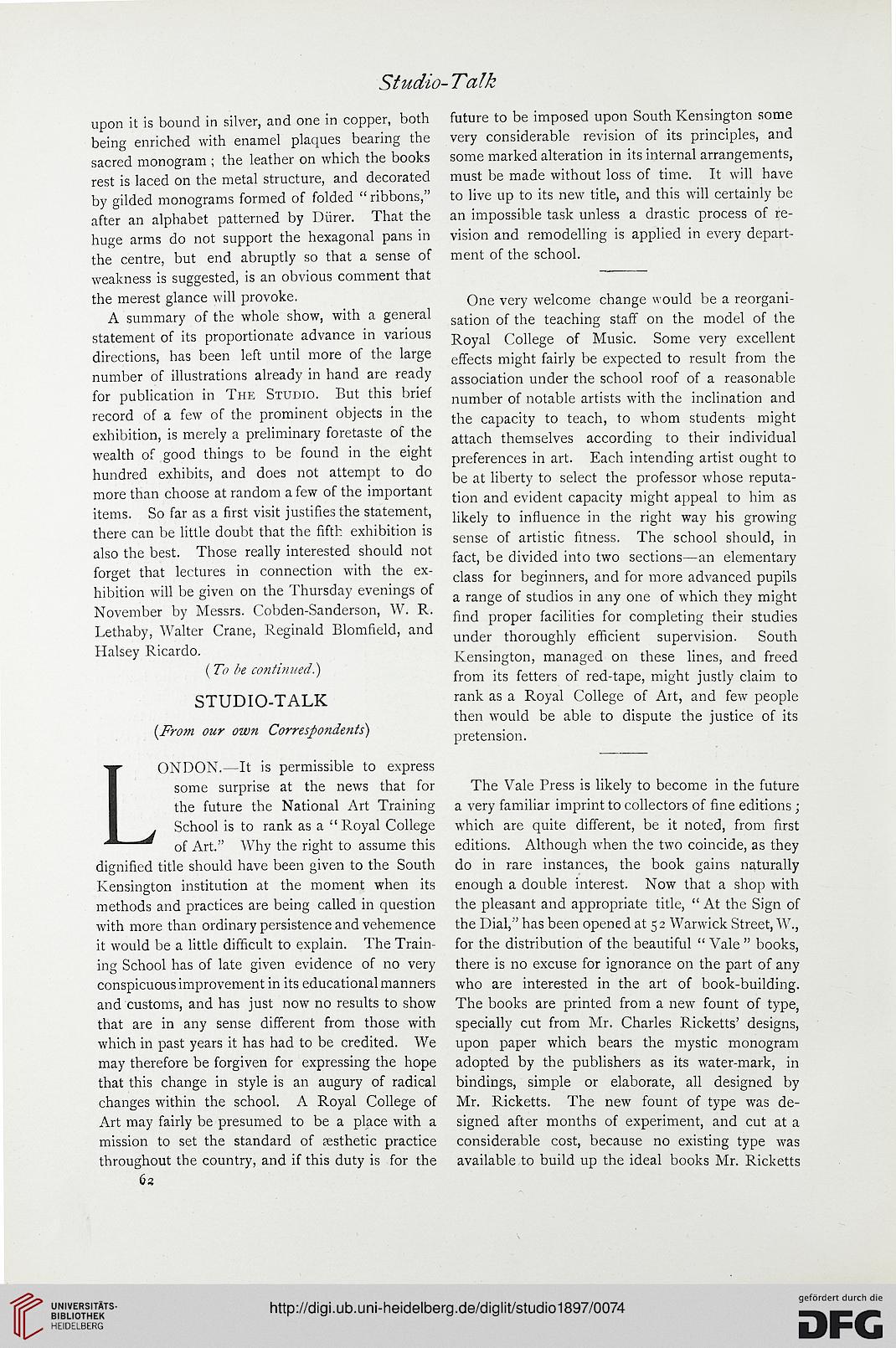 upon it is bound in silver, and one in copper, both
being enriched with enamel plaques bearing the
sacred monogram ; the leather on which the books
rest is laced on the metal structure, and decorated
by gilded monograms formed of folded " ribbons,"
after an alphabet patterned by Diirer. That the
huge arms do not support the hexagonal pans in
the centre, but end abruptly so that a sense of
weakness is suggested, is an obvious comment that
the merest glance will provoke.

A summary of the whole show, with a general
statement of its proportionate advance in various
directions, has been left until more of the large
number of illustrations already in hand are ready
for publication in The Studio. But this brief
record of a few of the prominent objects in the
exhibition, is merely a preliminary foretaste of the
wealth of good things to be found in the eight
hundred exhibits, and does not attempt to do
more than choose at random a few of the important
items. So far as a first visit justifies the statement,
there can be little doubt that the fifth exhibition is
also the best. Those really interested should not
forget that lectures in connection with the ex-
hibition will be given on the Thursday evenings of
November by Messrs. Cobden-Sanderson, W. R.
Lethaby, Walter Crane, Reginald Blomfield, and
Halsey Ricardo.

LONDON.—It is permissible to express
some surprise at the news that for
the future the National Art Training
School is to rank as a "Royal College
of Art." Why the right to assume this
dignified title should have been given to the South
Kensington institution at the moment when its
methods and practices are being called in question
with more than ordinary persistence and vehemence
it would be a little difficult to explain. The Train-
ing School has of late given evidence of no very
conspicuous improvement in its educational manners
and customs, and has just now no results to show
that are in any sense different from those with
which in past years it has had to be credited. We
may therefore be forgiven for expressing the hope
that this change in style is an augury of radical
changes within the school. A Royal College of
Art may fairly be presumed to be a place with a
mission to set the standard of aesthetic practice
throughout the country, and if this duty is for the
6a

future to be imposed upon South Kensington some
very considerable revision of its principles, and
some marked alteration in its internal arrangements,
must be made without loss of time. It will have
to live up to its new title, and this will certainly be
an impossible task unless a drastic process of re-
vision and remodelling is applied in every depart-
ment of the school.

One very welcome change would be a reorgani-
sation of the teaching staff on the model of the
Royal College of Music. Some very excellent
effects might fairly be expected to result from the
association under the school roof of a reasonable
number of notable artists with the inclination and
the capacity to teach, to whom students might
attach themselves according to their individual
preferences in art. Each intending artist ought to
be at liberty to select the professor whose reputa-
tion and evident capacity might appeal to him as
likely to influence in the right way his growing
sense of artistic fitness. The school should, in
fact, be divided into two sections—an elementary
class for beginners, and for more advanced pupils
a range of studios in any one of which they might
find proper facilities for completing their studies
under thoroughly efficient supervision. South
Kensington, managed on these lines, and freed
from its fetters of red-tape, might justly claim to
rank as a Royal College of Art, and few people
then would be able to dispute the justice of its
pretension.

The Vale Press is likely to become in the future
a very familiar imprint to collectors of fine editions ;
which are quite different, be it noted, from first
editions. Although when the two coincide, as they
do in rare instances, the book gains naturally
enough a double interest. Now that a shop with
the pleasant and appropriate title, " At the Sign of
the Dial," has been opened at 52 Warwick Street, W.,
for the distribution of the beautiful " Vale " books,
there is no excuse for ignorance on the part of any
who are interested in the art of book-building.
The books are printed from a new fount of type,
specially cut from Mr. Charles Ricketts' designs,
upon paper which bears the mystic monogram
adopted by the publishers as its water-mark, in
bindings, simple or elaborate, all designed by
Mr. Ricketts. The new fount of type was de-
signed after months of experiment, and cut at a
considerable cost, because no existing type was
available to build up the ideal books Mr. Ricketts