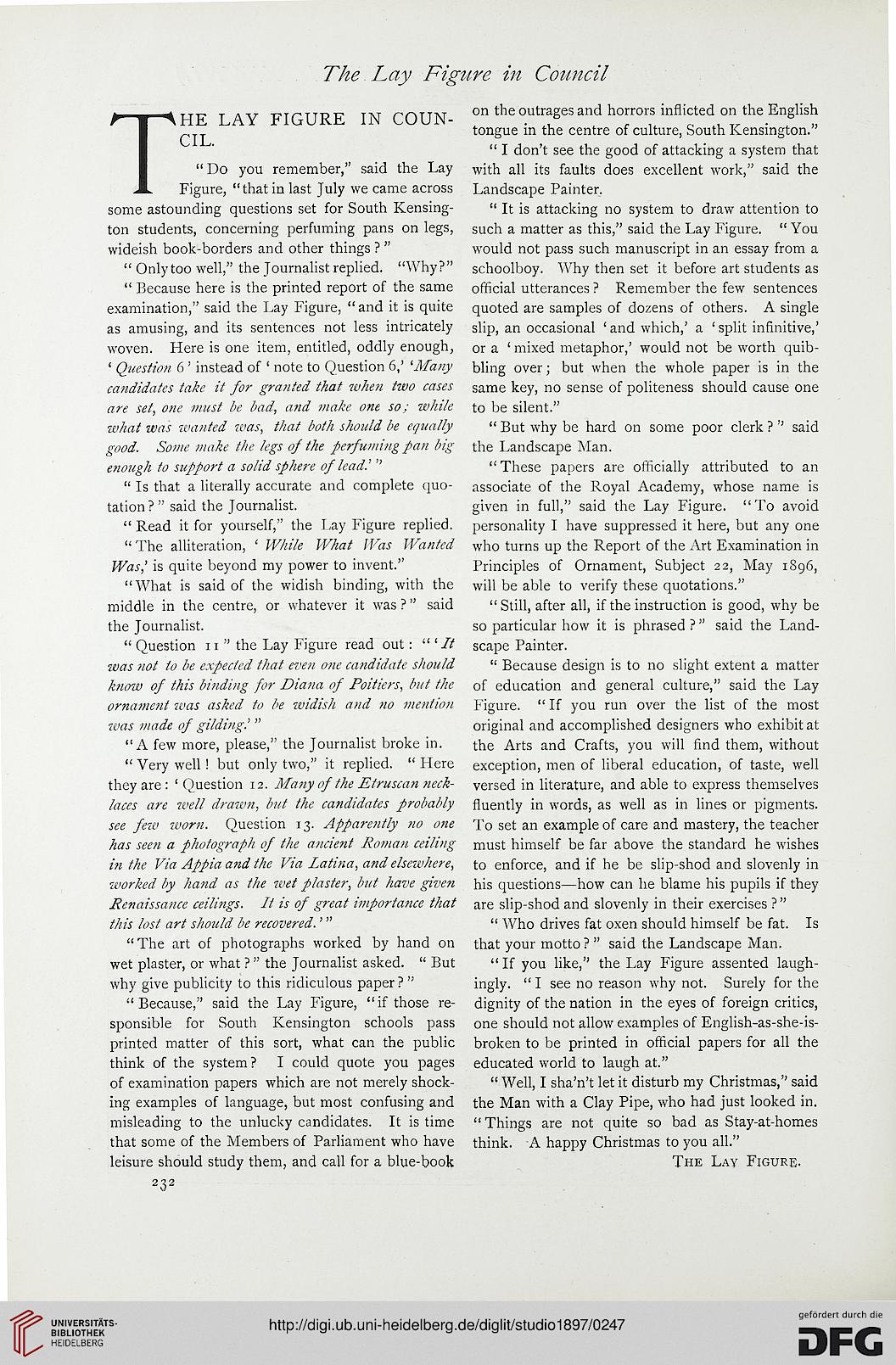 Information about OCR text
The Lay Figure in Council

THE LAY FIGURE IN COUN-
CIL.
"Do you remember," said the Lay
Figure, "that in last July we came across
some astounding questions set for South Kensing-
ton students, concerning perfuming pans on legs,
wideish book-borders and other things ? "

" Only too well," the Journalist replied. "Why?"
" Because here is the printed report of the same
examination," said the Lay Figure, "and it is quite
as amusing, and its sentences not less intricately
woven. Here is one item, entitled, oddly enough,
1 Question 6 ' instead of ' note to Question 6,' lMany
candidates take it for granted that when two cases
are set, one must be bad, and make one so; while
what was wanted was, that both should be equally
good. Sonic make the legs of the perfuming pan big
enough to support a solid sphere of lead.' "

" Is that a literally accurate and complete quo-
tation ? " said the Journalist.

" Read it for yourself," the Lay Figure replied.
"The alliteration, ' While What Was Wanted
Was,' is quite beyond my power to invent."

"What is said of the widish binding, with the
middle in the centre, or whatever it was ?" said
the Journalist.

" Question n " the Lay Figure read out : It
was not to be expected that even otic candidate should
know of this binding for Diana of Poitiers, but the
ornament was asked to be widish and no mention
was made of gilding.' "

"A few more, please," the Journalist broke in.
" Very well ! but only two," it replied. " Here
they are : ' Question 12. Many of the Etruscan neck-
laces are well drawn, but the candidates probably
see few worn. Question 13. Apparently no one
has seen a photograph of the ancient Roman ceiling
in the Via Appia and the Via Latina, and elsewhere,
ivorked by hand as the wet plaster, but have given
Renaissance ceilings. It is of great importance that
this lost art should be recovered.'"

"The art of photographs worked by hand on
wet plaster, or what ? " the Journalist asked. " But
why give publicity to this ridiculous paper ? "

"Because," said the Lay Figure, "if those re-
sponsible for South Kensington schools pass
printed matter of this sort, what can the public
think of the system? I could quote you pages
of examination papers which are not merely shock-
ing examples of language, but most confusing and
misleading to the unlucky candidates. It is time
that some of the Members of Parliament who have
leisure should study them, and call for a blue-book
232

on the outrages and horrors inflicted on the English
tongue in the centre of culture, South Kensington."

" I don't see the good of attacking a system that
with all its faults does excellent work," said the
Landscape Painter.

" It is attacking no system to draw attention to
such a matter as this," said the Lay Figure. " You
would not pass such manuscript in an essay from a
schoolboy. Why then set it before art students as
official utterances ? Remember the few sentences
quoted are samples of dozens of others. A single
slip, an occasional ' and which,' a ' split infinitive,'
or a ' mixed metaphor,' would not be worth quib-
bling over; but when the whole paper is in the
same key, no sense of politeness should cause one
to be silent."

" But why be hard on some poor clerk ? " said
the Landscape Man.

"These papers are officially attributed to an
associate of the Royal Academy, whose name is
given in full," said the Lay Figure. "To avoid
personality I have suppressed it here, but any one
who turns up the Report of the Art Examination in
Principles of Ornament, Subject 22, May 1896,
will be able to verify these quotations."

"Still, after all, if the instruction is good, why be
so particular how it is phrased ? " said the Land-
scape Painter.

" Because design is to no slight extent a matter
of education and general culture," said the Lay
Figure. " If you run over the list of the most
original and accomplished designers who exhibit at
the Arts and Crafts, you will find them, without
exception, men of liberal education, of taste, well
versed in literature, and able to express themselves
fluently in words, as well as in lines or pigments.
To set an example of care and mastery, the teacher
must himself be far above the standard he wishes
to enforce, and if he be slip-shod and slovenly in
his questions—how can he blame his pupils if they
are slip-shod and slovenly in their exercises ? "

" Who drives fat oxen should himself be fat. Is
that your motto ? " said the Landscape Man.

"If you like," the Lay Figure assented laugh-
ingly. " I see no reason why not. Surely for the
dignity of the nation in the eyes of foreign critics,
one should not allow examples of English-as-she-is-
broken to be printed in official papers for all the
educated world to laugh at."

" Well, I sha'n't let it disturb my Christmas," said
the Man with a Clay Pipe, who had just looked in.
"Things are not quite so bad as Stay-at-homes
think. A happy Christmas to you all."