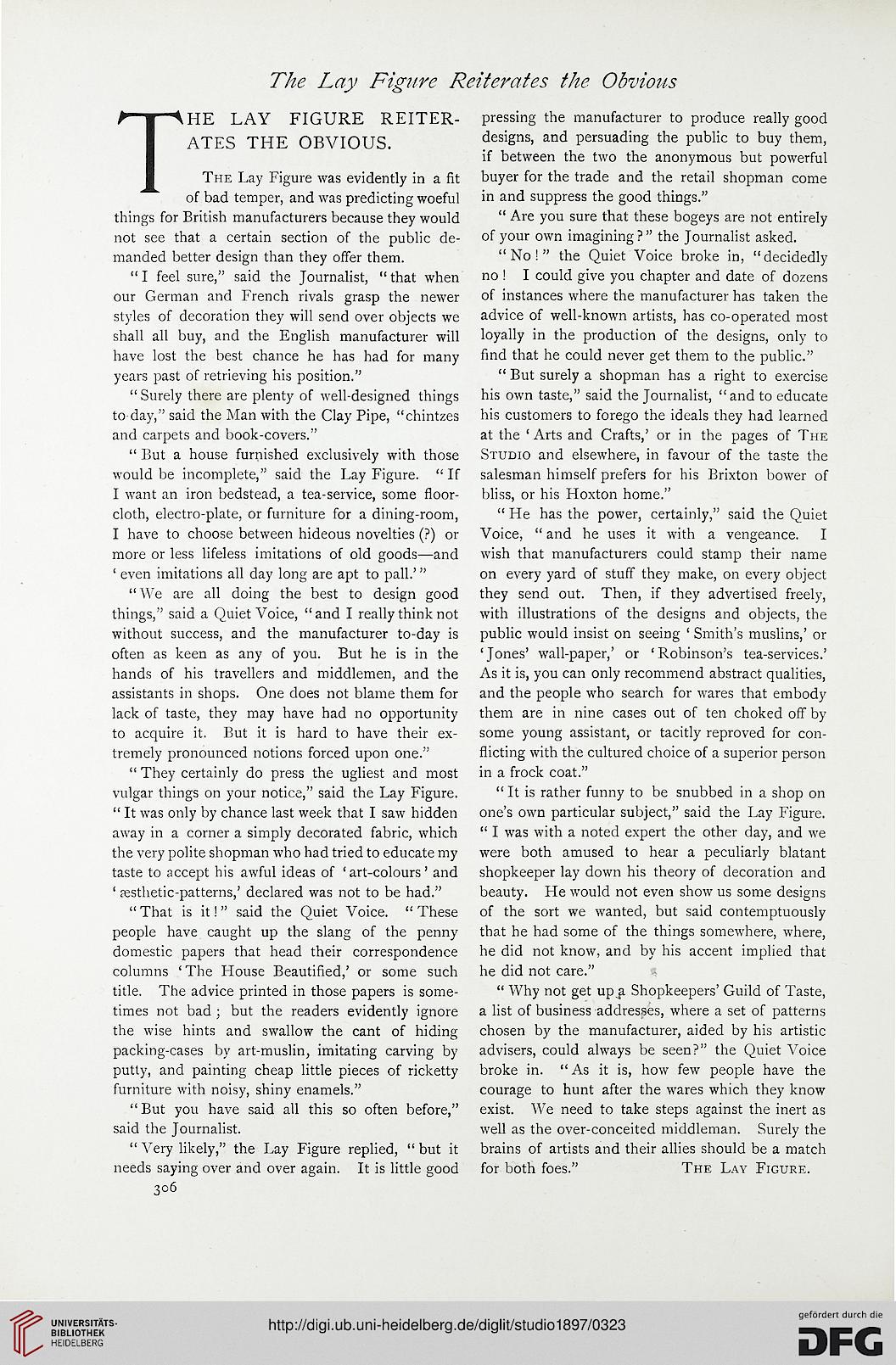 Information about OCR text
The Lay Figure Reiterates the Obvious

ATES THE OBVIOUS designs, and persuading the public to buy them,
if between the two the anonymous but powerful

of bad temper, and was predicting woeful in and suppress the good things."

not see that a certain section of the public de- of your own imagining ? " the Journalist asked,

manded better design than they offer them. "No!" the Quiet Voice broke in, "decidedly

" I feel sure," said the Journalist, " that when no ! I could give you chapter and date of dozens

styles of decoration they will send over objects we advice of well-known artists, has co-operated most

shall all buy, and the English manufacturer will loyally in the production of the designs, only to

have lost the best chance he has had for many find that he could never get them to the public."

years past of retrieving his position." " But surely a shopman has a right to exercise

"Surely there are plenty of well-designed things his own taste," said the Journalist, "and to educate

to day," said the Man with the Clay Pipe, "chintzes his customers to forego the ideals they had learned

and carpets and book-covers." at the ' Arts and Crafts,' or in the pages of The

" But a house furnished exclusively with those Studio and elsewhere, in favour of the taste the

would be incomplete," said the Lay Figure. " If salesman himself prefers for his Brixton bower of

I want an iron bedstead, a tea-service, some floor- bliss, or his Hoxton home."

cloth, electro-plate, or furniture for a dining-room, " He has the power, certainly," said the Quiet

I have to choose between hideous novelties (?) or Voice, " and he uses it with a vengeance. I

' even imitations all day long are apt to pall.'" on every yard of stuff they make, on every object

"We are all doing the best to design good they send out. Then, if they advertised freely,

things," said a Quiet Voice, "and I really think not with illustrations of the designs and objects, the

without success, and the manufacturer to-day is public would insist on seeing 1 Smith's muslins,' or

often as keen as any of you. But he is in the 'Jones' wall-paper,' or 'Robinson's tea-services.'

hands of his travellers and middlemen, and the As it is, you can only recommend abstract qualities,

assistants in shops. One does not blame them for and the people who search for wares that embody

lack of taste, they may have had no opportunity them are in nine cases out of ten choked off by

to acquire it. But it is hard to have their ex- some young assistant, or tacitly reproved for con-

tremely pronounced notions forced upon one." flicting with the cultured choice of a superior person

" They certainly do press the ugliest and most in a frock coat."

vulgar things on your notice," said the Lay Figure. " It is rather funny to be snubbed in a shop on

" It was only by chance last week that I saw hidden one's own particular subject," said the Lay Figure,

away in a corner a simply decorated fabric, which " I was with a noted expert the other day, and we

' aesthetic-patterns,' declared was not to be had." beauty. He would not even show us some designs

" That is it!" said the Quiet Voice. " These of the sort we wanted, but said contemptuously

people have caught up the slang of the penny that he had some of the things somewhere, where,

domestic papers that head their correspondence he did not know, and by his accent implied that

columns ' The House Beautified,' or some such he did not care."

title. The advice printed in those papers is some- " Why not get upShopkeepers' Guild of Taste,

times not bad; but the readers evidently ignore a list of business addresses, where a set of patterns

the wise hints and swallow the cant of hiding chosen by the manufacturer, aided by his artistic

packing-cases by art-muslin, imitating carving by advisers, could always be seen?" the Quiet Voice

putty, and painting cheap little pieces of ricketty broke in. "As it is, how few people have the

furniture with noisy, shiny enamels." courage to hunt after the wares which they know

" But you have said all this so often before," exist. We need to take steps against the inert as

said the Journalist. well as the over-conceited middleman. Surely the

" Very likely," the Lay Figure replied, " but it brains of artists and their allies should be a match

needs saying over and over again. It is little good for both foes." The Lay Figure.
306