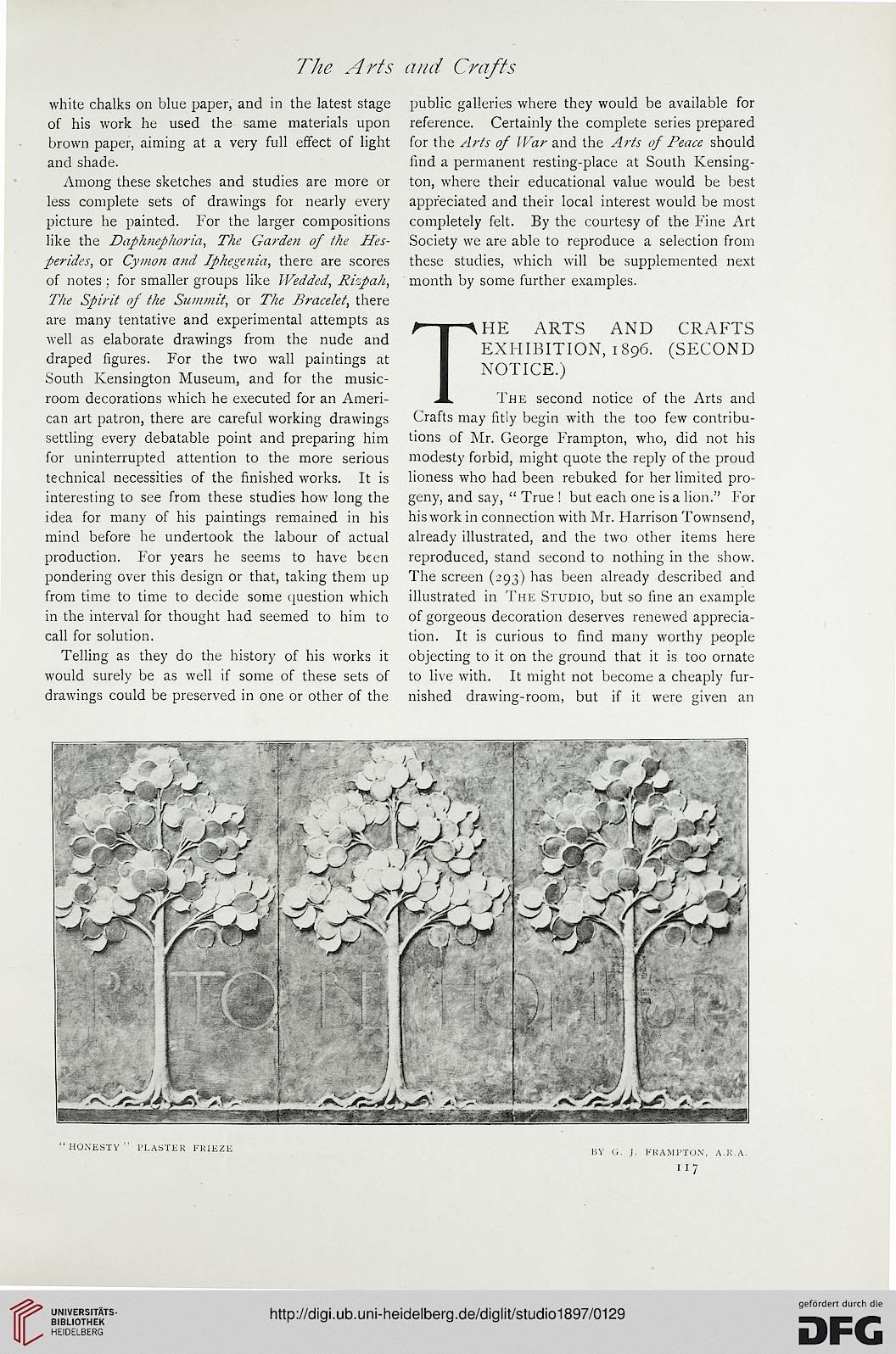 white chalks on blue paper, and in the latest stage
of his work he used the same materials upon
brown paper, aiming at a very full effect of light
and shade.

Among these sketches and studies are more or
less complete sets of drawings for nearly every
picture he painted. For the larger compositions
like the Daphnephoria, The Garden of the Hes-
perides, or Cymon and Iphegenia, there are scores
of notes ; for smaller groups like Wedded, Rizpah,
The Spirit of the Summit, or The Bracelet, there
are many tentative and experimental attempts as
well as elaborate drawings from the nude and
draped figures. For the two wall paintings at
South Kensington Museum, and for the music-
room decorations which he executed for an Ameri-
can art patron, there are careful working drawings
settling every debatable point and preparing him
for uninterrupted attention to the more serious
technical necessities of the finished works. It is
interesting to see from these studies how long the
idea for many of his paintings remained in his
mind before he undertook the labour of actual
production. For years he seems to have been
pondering over this design or that, taking them up
from time to time to decide some question which
in the interval for thought had seemed to him to
call for solution.

public galleries where they would be available for
reference. Certainly the complete series prepared
for the Arts of War and the Arts of Peace should
find a permanent resting-place at South Kensing-
ton, where their educational value would be best
appreciated and their local interest would be most
completely felt. By the courtesy of the Fine Art
Society we are able to reproduce a selection from
these studies, which will be supplemented next
month by some further examples.

The second notice of the Arts and

Crafts may fitly begin with the too few contribu-
tions of Mr. George Frampton, who, did not his
modesty forbid, might quote the reply of the proud
lioness who had been rebuked for her limited pro-
geny, and say, " True ! but each one is a lion." For
his work in connection with Mr. Harrison Townsend,
already illustrated, and the two other items here
reproduced, stand second to nothing in the show.
The screen (293) has been already described and
illustrated in The Studio, but so fine an example
of gorgeous decoration deserves renewed apprecia-
tion. It is curious to find many worthy people
objecting to it on the ground that it is too ornate
to live with. It might not become a cheaply fur-
nished drawing-room, but if it were given an