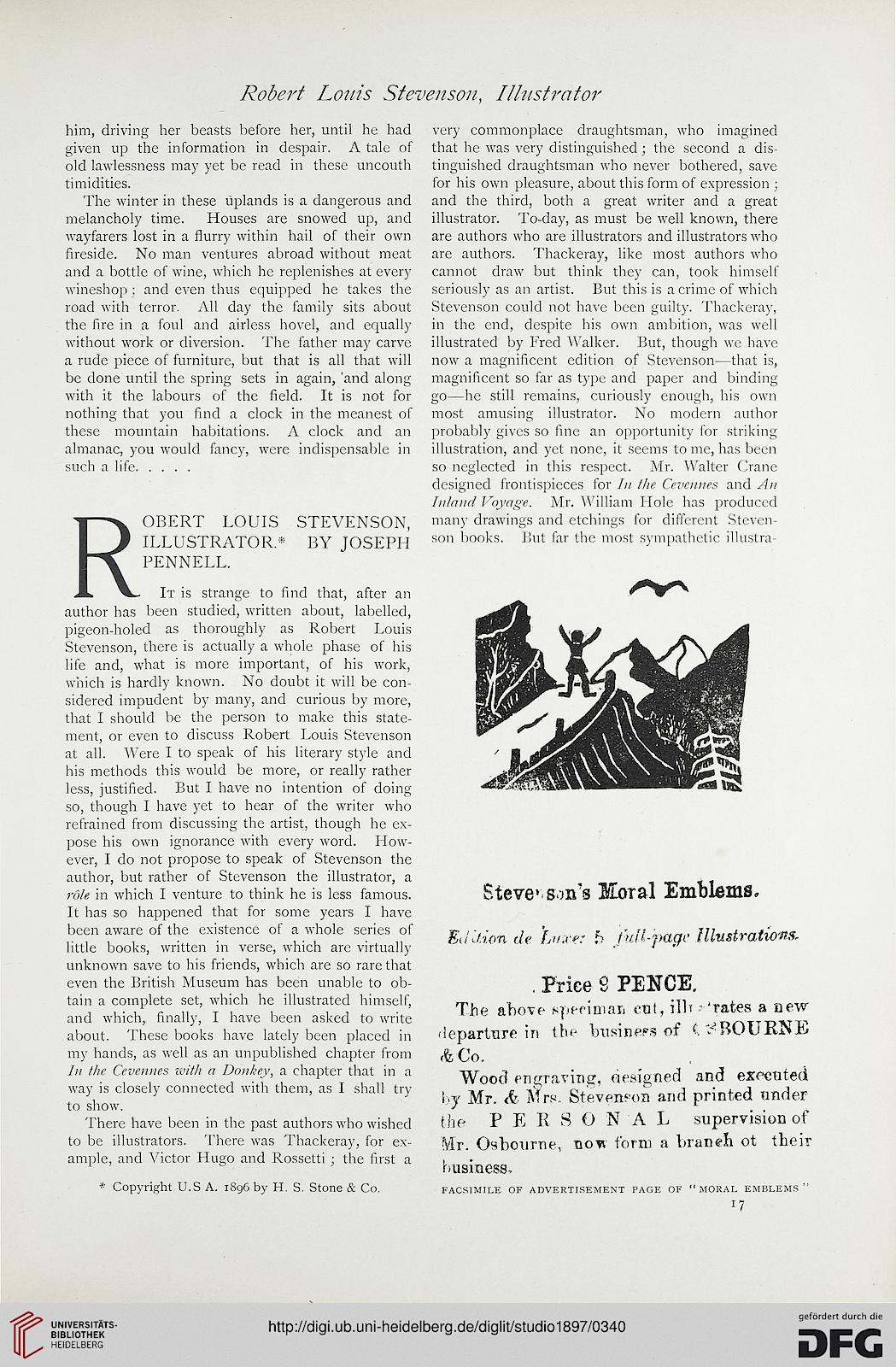 very commonplace draughtsman, who imagined
that he was very distinguished; the second a dis-
tinguished draughtsman who never bothered, save
for his own pleasure, about this form of expression ;
and the third, both a great writer and a great
illustrator. To-day, as must be well known, there
are authors who are illustrators and illustrators who
are authors. Thackeray, like most authors who
cannot draw but think they can, took himself
seriously as an artist. But this is a crime of which
Stevenson could not have been guilty. Thackeray,
in the end, despite his own ambition, was well
illustrated by Fred Walker. But, though we have
now a magnificent edition of Stevenson—that is,
magnificent so far as type and paper and binding
go—he still remains, curiously enough, his own
most amusing illustrator. No modern author
probably gives so fine an opportunity for striking
illustration, and yet none, it seems to me, has been
so neglected in this respect. Mr. Walter Crane
designed frontispieces for /// the Cevcnnes and An
Inland Voyage. Mr. William Hole has produced
many drawings and etchings for different Steven-
son books. But far the most sympathetic illustra-

him, driving her beasts before her, until he had
given up the information in despair. A talc of
old lawlessness may yet be read in these uncouth
timidities.

The winter in these uplands is a dangerous and
melancholy time. Houses are snowed up, and
wayfarers lost in a flurry within hail of their own
fireside. No man ventures abroad without meat
and a bottle of wine, which he replenishes at every
wineshop : and even thus equipped he takes the
road with terror. All day the family sits about
the fire in a foul and airless hovel, and equally
without work or diversion. The father may carve
a rude piece of furniture, but that is all that will
be done until the spring sets in again, 'and along
with it the labours of the field. It is not for
nothing that you find a clock in the meanest of
these mountain habitations. A clock and an
almanac, you would fancy, were indispensable in
such a life.....

ROBERT LOUIS STEVENSON,
ILLUSTRATOR.* BY JOSEPH
PENNELL.
It is strange to find that, after an
author has been studied, written about, labelled,
pigeon-holed as thoroughly as Robert Louis
Stevenson, there is actually a whole phase of his
life and, what is more important, of his work,
which is hardly known. No doubt it will be con-
sidered impudent by many, and curious by more,
that I should be the person to make this state-
ment, or even to discuss Robert Louis Stevenson
at all. Were I to speak of his literary style and
his methods this would be more, or really rather
less, justified. But I have no intention of doing
so, though I have yet to hear of the writer who
refrained from discussing the artist, though he ex-
pose his own ignorance with every word. How-
ever, I do not propose to speak of Stevenson the
author, but rather of Stevenson the illustrator, a
role in which I venture to think he is less famous.
It has so happened that for some years I have
been aware of the existence of a whole series of
little books, written in verse, which are virtually
unknown save to his friends, which are so rare that
even the British Museum has been unable to ob-
tain a complete set, which he illustrated himself,
and which, finally, I have been asked to write
about. These books have lately been placed in
my hands, as well as an unpublished chapter from
/// the Cevennes with a Donkey, a chapter that in a
way is closely connected with them, as I shall try
to show.

There have been in the past authors who wished
to be illustrators. There was Thackeray, for ex-
ample, and Victor Hugo and Rossetti ; the first a

The above Kperimarj out, illi ■ 'rates a new-
departure in the business of i :-JBOURNE
&Co.