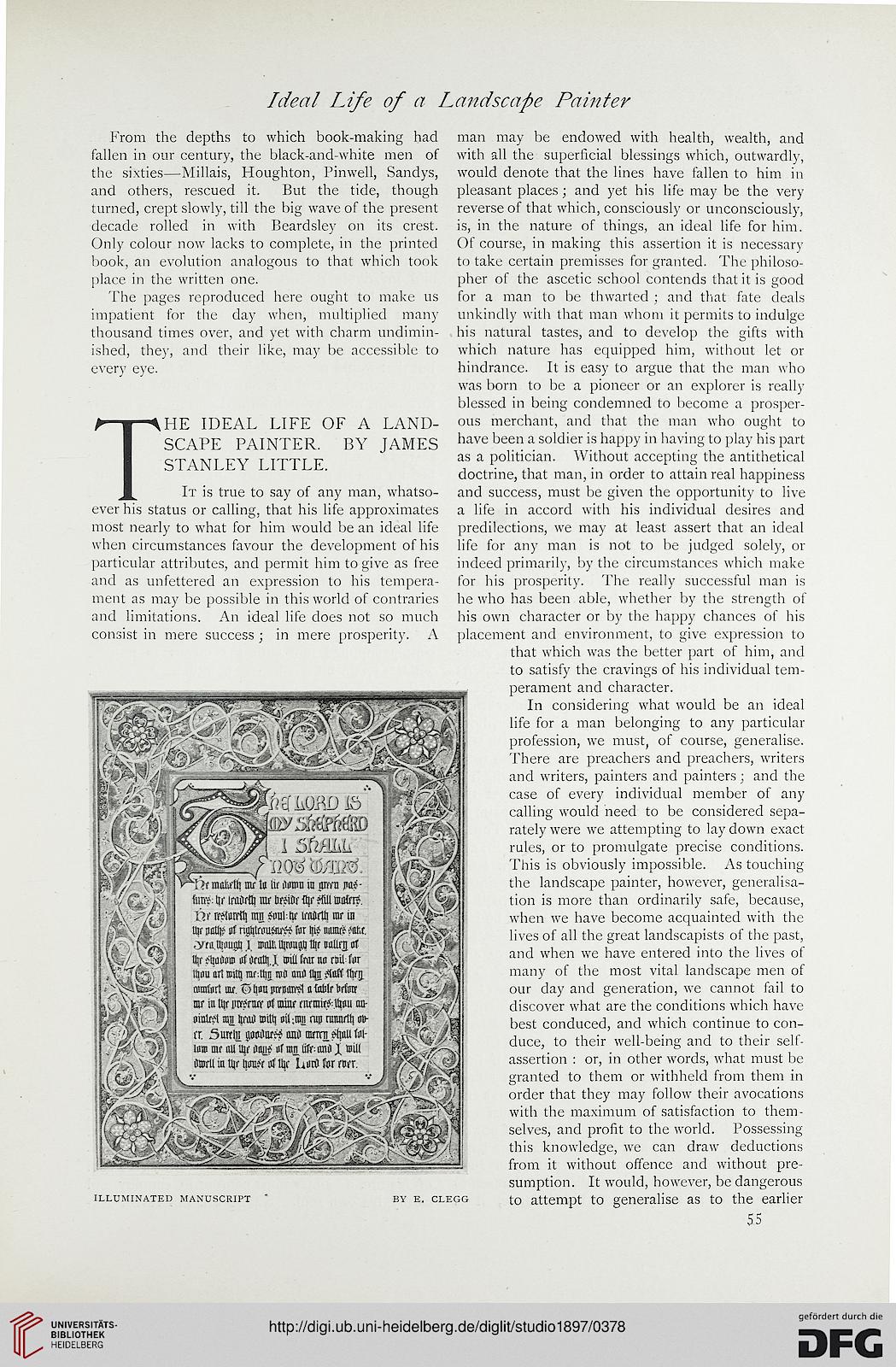 Information about OCR text
Ideal Life of a Landscape Painter

From the depths to which book-making had man may be endowed with health, wealth, and
fallen in our century, the black-and-white men of with all the superficial blessings which, outwardly,
the sixties—Millais, Houghton, Pinwell, Sandys, would denote that the lines have fallen to him in
and others, rescued it. But the tide, though pleasant places ; and yet his life may be the very
turned, crept slowly, till the big wave of the present reverse of that which, consciously or unconsciously,
decade rolled in with Beardsley on its crest, is, in the nature of things, an ideal life for him.
Only colour now lacks to complete, in the printed Of course, in making this assertion it is necessary
book, an evolution analogous to that which took to take certain premisses for granted. The philoso-
place in the written one. pher of the ascetic school contends that it is good

The pages reproduced here ought to make us for a man to lie thwarted ; and that fate deals
impatient for the day when, multiplied many unkindly with that man whom it permits to indulge
thousand times over, and yet with charm undimin- his natural tastes, and to develop the gifts with
ished, they, and their like, may be accessible to which nature has equipped him, without let or
every eye. hindrance. It is easy to argue that the man who

THE IDEAL LIFE OF A LAND- °us merchant, and that the man who ought to
5CAPE PAINTER BY JAMES have been a soldier is happy in having to play his part
STANLEY LITTLE aS a Pon^c^an- Without accepting the antithetical

doctrine, that man, in order to attain real happiness
It is true to say of any man, whatso- and success, must be given the opportunity to live
ever his status or calling, that his life approximates a life in accord with his individual desires and
most nearly to what for him would be an ideal life predilections, we may at least assert that an ideal
when circumstances favour the development of his life for any man is not to be judged solely, or
particular attributes, and permit him to give as free indeed primarily, by the circumstances which make
and as unfettered an expression to his tempera- for his prosperity. The really successful man is
ment as may be possible in this world of contraries he who has been able, whether by the strength of
and limitations. An ideal life does not so much his own character or by the happy chances of his
consist in mere success ; in mere prosperity. A placement and environment, to give expression to

that which was the better part of him, and
to satisfy the cravings of his individual tem-
perament and character.

In considering what would be an ideal
life for a man belonging to any particular
profession, we must, of course, generalise.
There are preachers and preachers, writers
and writers, painters and painters; and the
case of every individual member of any
calling would need to be considered sepa-
rately were we attempting to lay down exact
rules, or to promulgate precise conditions.
This is obviously impossible. As touching
the landscape painter, however, generalisa-
tion is more than ordinarily safe, because,
when we have become acquainted with the
lives of all the great landscapists of the past,
and when we have entered into the lives of
many of the most vital landscape men of
our day and generation, we cannot fail to
discover what are the conditions which have
best conduced, and which continue to con-
duce, to their well-being and to their self-
assertion : or, in other words, what must be
granted to them or withheld from them in
order that they may follow their avocations
with the maximum of satisfaction to them-
selves, and profit to the world. Possessing
this knowledge, we can draw deductions
from it without offence and without pre-
sumption. It would, however, be dangerous
illuminated maxuscript by e. clegg to attempt to generalise as to the earlier