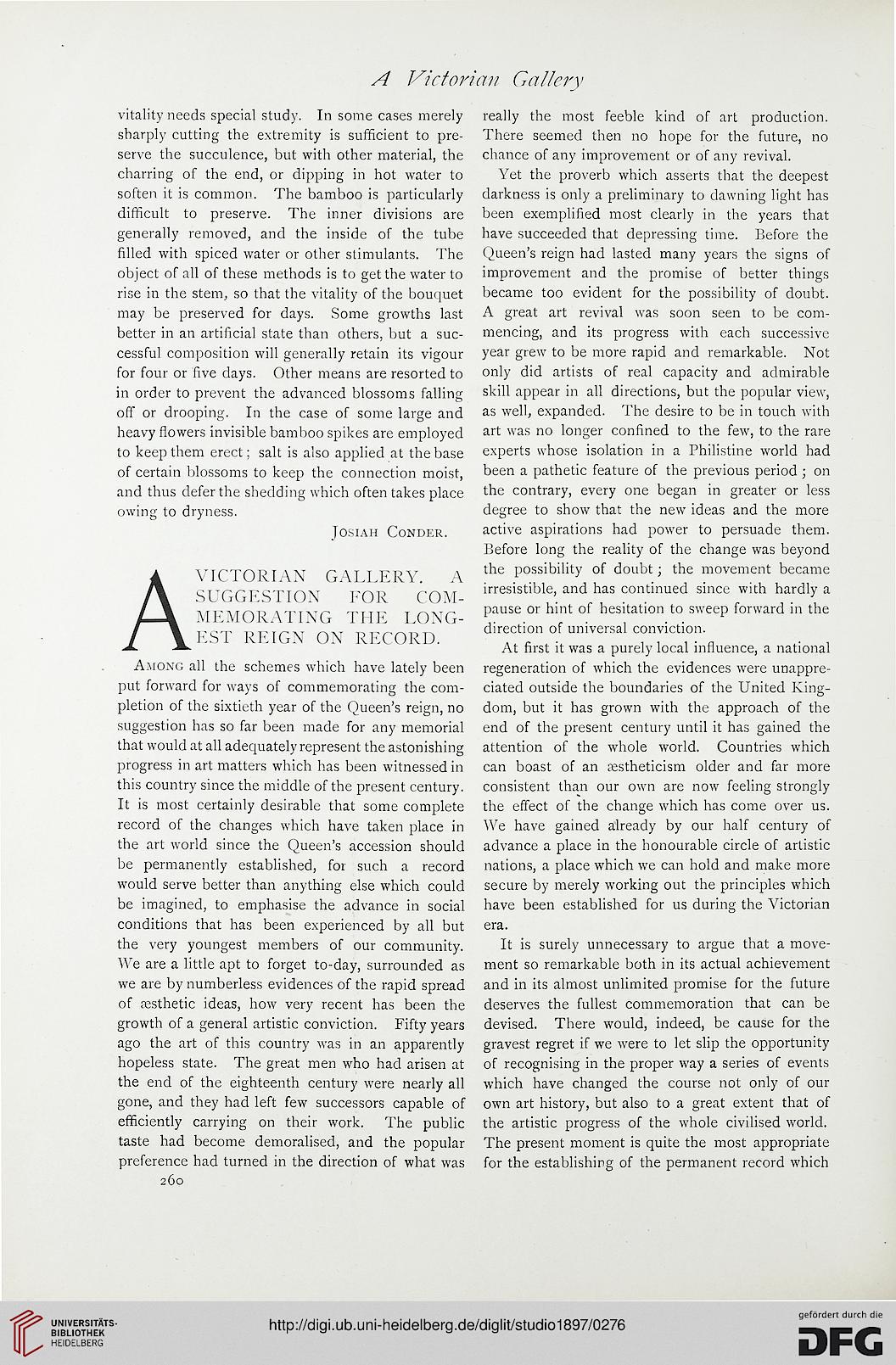 vitality needs special study. In some cases merely
sharply cutting the extremity is sufficient to pre-
serve the succulence, but with other material, the
charring of the end, or dipping in hot water to
soften it is common. The bamboo is particularly
difficult to preserve. The inner divisions are
generally removed, and the inside of the tube
filled with spiced water or other stimulants. The
object of all of these methods is to get the water to
rise in the stem, so that the vitality of the bouquet
may be preserved for days. Some growths last
better in an artificial state than others, but a suc-
cessful composition will generally retain its vigour
for four or five days. Other means are resorted to
in order to prevent the advanced blossoms falling
off or drooping. In the case of some large and
heavy flowers invisible bamboo spikes are employed
to keep them erect; salt is also applied at the base
of certain blossoms to keep the connection moist,
and thus defer the shedding which often takes place
owing to dryness.

Among all the schemes which have lately been
put forward for ways of commemorating the com-
pletion of the sixtieth year of the Queen's reign, no
suggestion has so far been made for any memorial
that would at all adequately represent the astonishing
progress in art matters which has been witnessed in
this country since the middle of the present century.
It is most certainly desirable that some complete
record of the changes which have taken place in
the art world since the Queen's accession should
be permanently established, for such a record
would serve better than anything else which could
be imagined, to emphasise the advance in social
conditions that has been experienced by all but
the very youngest members of our community.
We are a little apt to forget to-day, surrounded as
we are by numberless evidences of the rapid spread
of aesthetic ideas, how very recent has been the
growth of a general artistic conviction. Fifty years
ago the art of this country was in an apparently
hopeless state. The great men who had arisen at
the end of the eighteenth century were nearly all
gone, and they had left few successors capable of
efficiently carrying on their work. The public
taste had become demoralised, and the popular
preference had turned in the direction of what was
260

really the most feeble kind of art production.
There seemed then no hope for the future, no
chance of any improvement or of any revival.

Yet the proverb which asserts that the deepest
darkness is only a preliminary to dawning light has
been exemplified most clearly in the years that
have succeeded that depressing time. Before the
Queen's reign had lasted many years the signs of
improvement and the promise of better things
became too evident for the possibility of doubt.
A great art revival was soon seen to be com-
mencing, and its progress with each successive
year grew to be more rapid and remarkable. Not
only did artists of real capacity and admirable
skill appear in all directions, but the popular view,
as well, expanded. The desire to be in touch with
art was no longer confined to the few, to the rare
experts whose isolation in a Philistine world had
been a pathetic feature of the previous period ; on
the contrary, every one began in greater or less
degree to show that the new ideas and the more
active aspirations had power to persuade them,
before long the reality of the change was beyond
the possibility of doubt; the movement became
irresistible, and has continued since with hardly a
pause or hint of hesitation to sweep forward in the
direction of universal conviction.

At first it was a purely local influence, a national
regeneration of which the evidences were unappre-
ciated outside the boundaries of the United King-
dom, but it has grown with the approach of the
end of the present century until it has gained the
attention of the whole world. Countries which
can boast of an asstheticism older and far more
consistent than our own are now feeling strongly
the effect of the change which has come over us.
We have gained already by our half century of
advance a place in the honourable circle of artistic
nations, a place which we can hold and make more
secure by merely working out the principles which
have been established for us during the Victorian
era.

It is surely unnecessary to argue that a move-
ment so remarkable both in its actual achievement
and in its almost unlimited promise for the future
deserves the fullest commemoration that can be
devised. There would, indeed, be cause for the
gravest regret if we were to let slip the opportunity
of recognising in the proper way a series of events
which have changed the course not only of our
own art history, but also to a great extent that of
the artistic progress of the whole civilised world.
The present moment is quite the most appropriate
for the establishing of the permanent record which