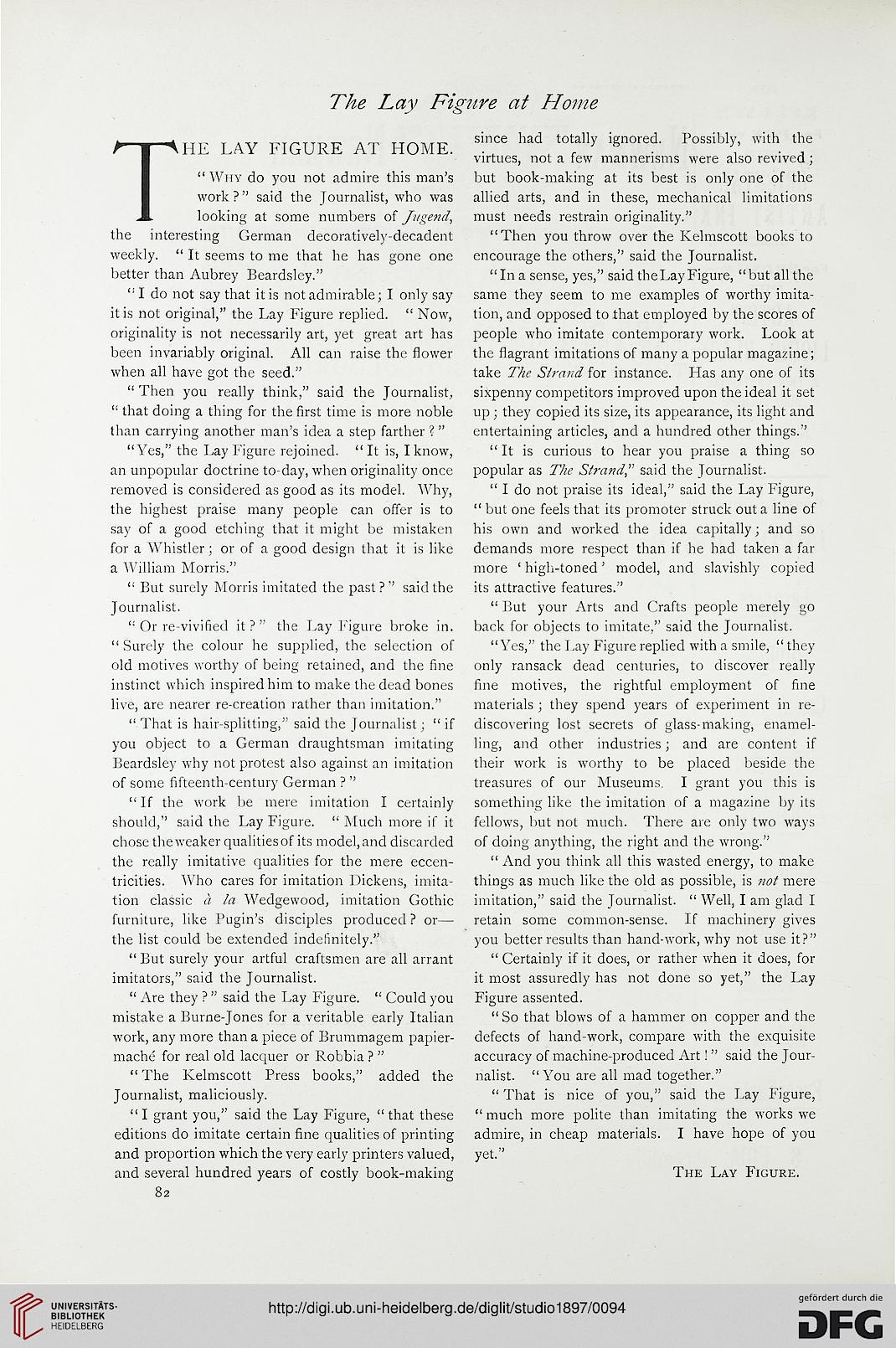 THE LAY FIGURE AT HOME.
" Why do you not admire this man's
work?" said the journalist, who was
looking at some numbers of Ji/gend,
the interesting German decoratively-decadent
weekly. " It seems to me that he has gone one
better than Aubrey Beardsley."

" I do not say that it is not admirable; I only say
it is not original," the Lay Figure replied. " Now,
originality is not necessarily art, yet great art has
been invariably original. All can raise the flower
when all have got the seed."

" Then you really think," said the Journalist,
" that doing a thing for the first time is more noble
than carrying another man's idea a step farther ? "

"Yes," the Lay Figure rejoined. " It is, I know,
an unpopular doctrine to-day, when originality once
removed is considered as good as its model. Why,
the highest praise many people can offer is to
say of a good etching that it might be mistaken
for a Whistler; or of a good design that it is like
a William Morris."

" But surely Morris imitated the past?" said the
Journalist.

<: Or re-vivified it?" the Lay Figure broke in.
" Surely the colour he supplied, the selection of
old motives worthy of being retained, and the fine
instinct which inspired him to make the dead bones
live, are nearer re-creation rather than imitation."

" That is hair-splitting," said the Journalist; " if
you object to a German draughtsman imitating
Beardsley why not protest also against an imitation
of some fifteenth-century German ? "

"If the work be mere imitation I certainly
should," said the Lay Figure. " Much more if it
chose the weaker qualities of its model, and discarded
the really imitative qualities for the mere eccen-
tricities. Who cares for imitation Dickens, imita-
tion classic a la Wedgewood, imitation Gothic
furniture, like Pugin's disciples produced ? or—
the list could be extended indefinitely."

"But surely your artful craftsmen are all arrant
imitators," said the Journalist.

" Are they ? " said the Lay Figure. " Could you
mistake a Burne-Jones for a veritable early Italian
work, any more than a piece of Brummagem papier-
mache for real old lacquer or Robbia ? "

"I grant you," said the Lay Figure, " that these
editions do imitate certain fine qualities of printing
and proportion which the very early printers valued,
and several hundred years of costly book-making
82

since had totally ignored. Possibly, with the
virtues, not a few mannerisms were also revived;
but book-making at its best is only one of the
allied arts, and in these, mechanical limitations
must needs restrain originality."

"Then you throw over the Kelmscott books to
encourage the others," said the Journalist.

"In a sense, yes," said the Lay Figure, "but all the
same they seem to me examples of worthy imita-
tion, and opposed to that employed by the scores of
people who imitate contemporary work. Look at
the flagrant imitations of many a popular magazine;
take The Strand for instance. Has any one of its
sixpenny competitors improved upon the ideal it set
up ; they copied its size, its appearance, its light and
entertaining articles, and a hundred other things."

" It is curious to hear you praise a thing so
popular as The Strand" said the Journalist.

" I do not praise its ideal," said the Lay Figure,
" but one feels that its promoter struck out a line of
his own and worked the idea capitally; and so
demands more respect than if he had taken a far
more ' high-toned' model, and slavishly copied
its attractive features."

" But your Arts and Crafts people merely go
back for objects to imitate," said the Journalist.

"Yes," the Lay Figure replied with a smile, " they
only ransack dead centuries, to discover really
fine motives, the rightful employment of fine
materials ; they spend years of experiment in re-
discovering lost secrets of glass-making, enamel-
ling, and other industries; and are content if
their work is worthy to be placed beside the
treasures of our Museums. I grant you this is
something like the imitation of a magazine by its
fellows, hut not much. There are only two ways
of doing anything, the right and the wrong."

" And you think all this wasted energy, to make
things as much like the old as possible, is not mere
imitation," said the Journalist. " Well, I am glad I
retain some common-sense. If machinery gives
you better results than hand-work, why not use it?"

" Certainly if it does, or rather when it does, for
it most assuredly has not done so yet," the Lay
Figure assented.

" So that blows of a hammer on copper and the
defects of hand-work, compare with the exquisite
accuracy of machine-produced Art! " said the Jour-
nalist. "You are all mad together."

" That is nice of you," said the Lay Figure,
" much more polite than imitating the works we
admire, in cheap materials. I have hope of you
yet."