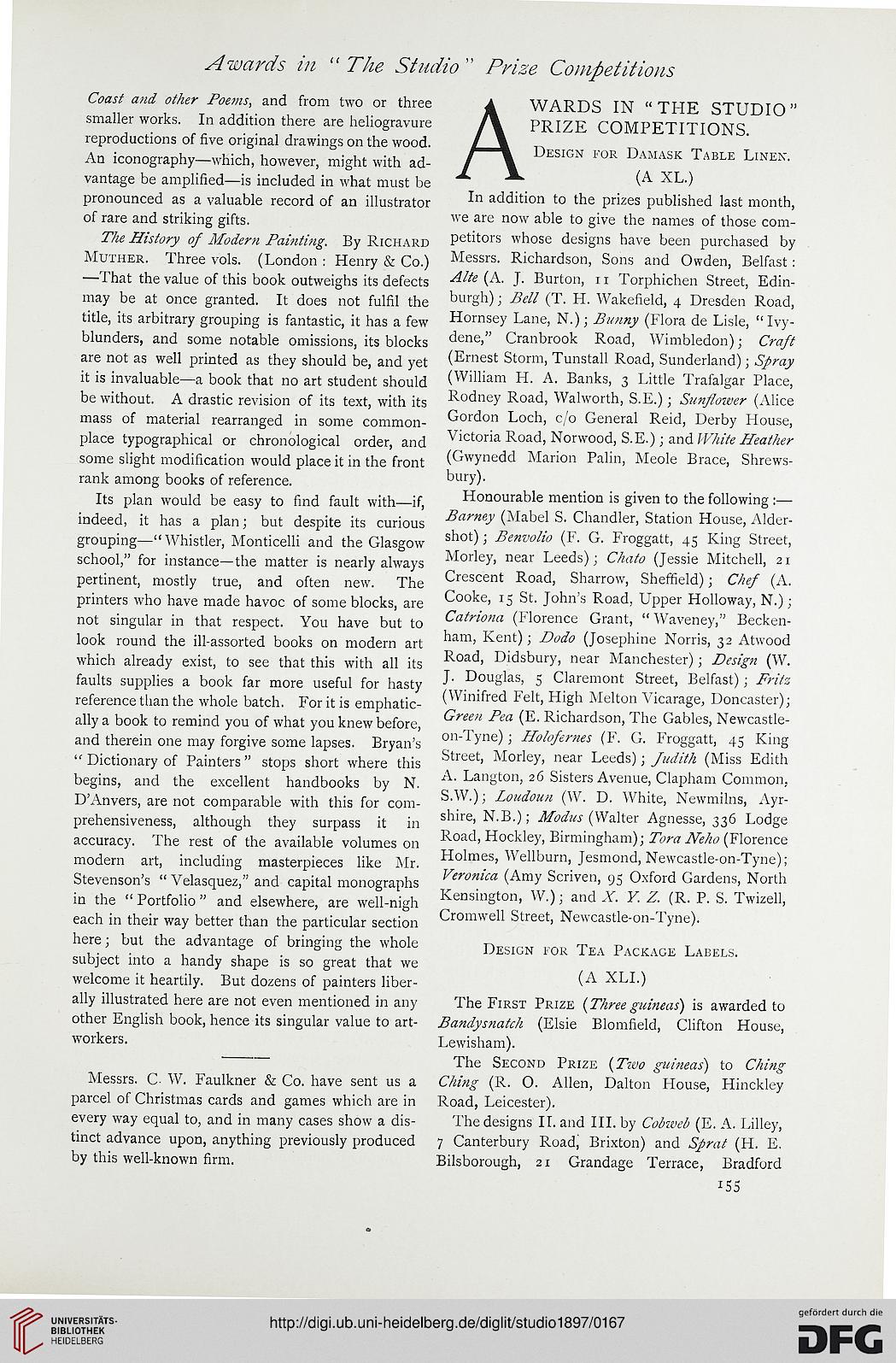 Coast and other Poems, and from two or three
smaller works. In addition there are heliogravure
reproductions of five original drawings on the wood.
An iconography—which, however, might with ad-
vantage be amplified—is included in what must be
pronounced as a valuable record of an illustrator
of rare and striking gifts.

The History of Modern Painting. By Richard
Muther. Three vols. (London : Henry & Co.)
—That the value of this book outweighs its defects
may be at once granted. It does not fulfil the
title, its arbitrary grouping is fantastic, it has a few
blunders, and some notable omissions, its blocks
are not as well printed as they should be, and yet
it is invaluable—a book that no art student should
be without. A drastic revision of its text, with its
mass of material rearranged in some common-
place typographical or chronological order, and
some slight modification would place it in the front
rank among books of reference.

Its plan would be easy to find fault with—if,
indeed, it has a plan; but despite its curious
grouping—"Whistler, Monticelli and the Glasgow
school," for instance—the matter is nearly always
pertinent, mostly true, and often new. The
printers who have made havoc of some blocks, are
not singular in that respect. You have but to
look round the ill-assorted books on modern art
which already exist, to see that this with all its
faults supplies a book far more useful for hasty
reference than the whole batch. For it is emphatic-
ally a book to remind you of what you knew before,
and therein one may forgive some lapses. Bryan's
" Dictionary of Painters" stops short where this
begins, and the excellent handbooks by N.
D'Anvers, are not comparable with this for com-
prehensiveness, although they surpass it in
accuracy. The rest of the available volumes on
modern art, including masterpieces like Mr.
Stevenson's " Velasquez," and capital monographs
in the " Portfolio" and elsewhere, are well-nigh
each in their way better than the particular section
here; but the advantage of bringing the whole
subject into a handy shape is so great that we
welcome it heartily. But dozens of painters liber-
ally illustrated here are not even mentioned in any
other English book, hence its singular value to art-
workers.

Messrs. C W. Faulkner & Co. have sent us a
parcel of Christmas cards and games which are in
every way equal to, and in many cases show a dis-
tinct advance upon, anything previously produced
by this well-known firm.

AWARDS IN "THE STUDIO"
PRIZE COMPETITIONS.
Design for Damask Table Linen.
(A XL.)

Honourable mention is given to the following :—