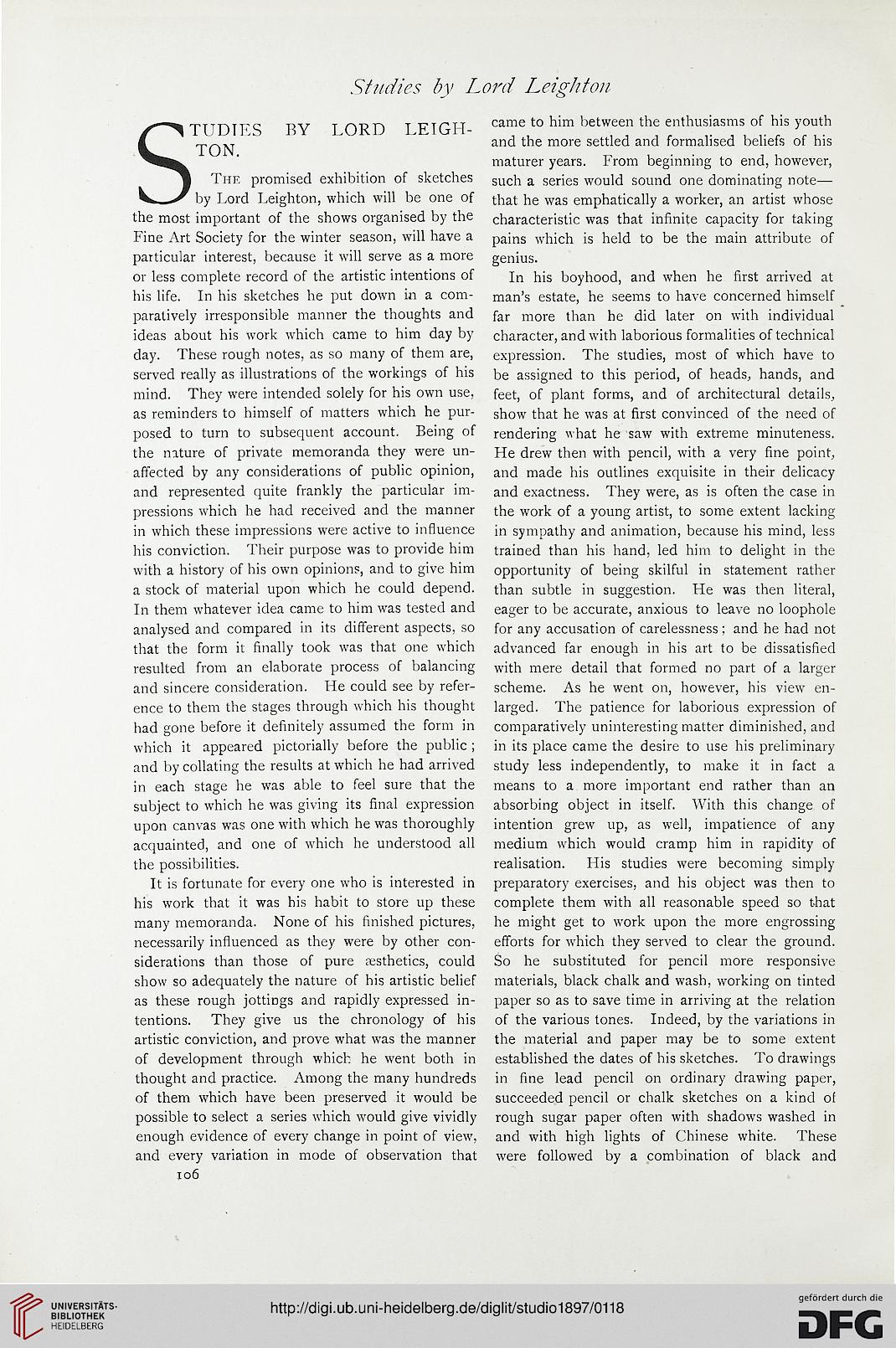 STUDIES BY LORD LET GIT-
TON.
i The promised exhibition of sketches
by Lord Leighton, which will be one of
the most important of the shows organised by the
Fine Art Society for the winter season, will have a
particular interest, because it will serve as a more
or less complete record of the artistic intentions of
his life. In his sketches he put down in a com-
paratively irresponsible manner the thoughts and
ideas about his work which came to him day by
day. These rough notes, as so many of them are,
served really as illustrations of the workings of his
mind. They were intended solely for his own use,
as reminders to himself of matters which he pur-
posed to turn to subsequent account. Being of
the nature of private memoranda they were un-
affected by any considerations of public opinion,
and represented quite frankly the particular im-
pressions which he had received and the manner
in which these impressions were active to influence
his conviction. Their purpose was to provide him
with a history of his own opinions, and to give him
a stock of material upon which he could depend.
In them whatever idea came to him was tested and
analysed and compared in its different aspects, so
that the form it finally took was that one which
resulted from an elaborate process of balancing
and sincere consideration. He could see by refer-
ence to them the stages through which his thought
had gone before it definitely assumed the form in
which it appeared pictorially before the public ;
and by collating the results at which he had arrived
in each stage he was able to feel sure that the
subject to which he was giving its final expression
upon canvas was one with which he was thoroughly
acquainted, and one of which he understood all
the possibilities.

It is fortunate for every one who is interested in
his work that it was his habit to store up these
many memoranda. None of his finished pictures,
necessarily influenced as they were by other con-
siderations than those of pure aesthetics, could
show so adequately the nature of his artistic belief
as these rough jottings and rapidly expressed in-
tentions. They give us the chronology of his
artistic conviction, and prove what was the manner
of development through which he went both in
thought and practice. Among the many hundreds
of them which have been preserved it would be
possible to select a series which would give vividly
enough evidence of every change in point of view,
and every variation in mode of observation that
106

came to him between the enthusiasms of his youth
and the more settled and formalised beliefs of his
maturer years. From beginning to end, however,
such a series would sound one dominating note—
that he was emphatically a worker, an artist whose
characteristic was that infinite capacity for taking
pains which is held to be the main attribute of
genius.

In his boyhood, and when he first arrived at
man's estate, he seems to have concerned himself
far more than he did later on with individual
character, and with laborious formalities of technical
expression. The studies, most of which have to
be assigned to this period, of heads, hands, and
feet, of plant forms, and of architectural details,
show that he was at first convinced of the need of
rendering what he saw with extreme minuteness.
He drew then with pencil, with a very fine point,
and made his outlines exquisite in their delicacy
and exactness. They were, as is often the case in
the work of a young artist, to some extent lacking
in sympathy and animation, because his mind, less
trained than his hand, led him to delight in the
opportunity of being skilful in statement rather
than subtle in suggestion. He was then literal,
eager to be accurate, anxious to leave no loophole
for any accusation of carelessness ; and he had not
advanced far enough in his art to be dissatisfied
with mere detail that formed no part of a larger
scheme. As he went on, however, his view en-
larged. The patience for laborious expression of
comparatively uninteresting matter diminished, and
in its place came the desire to use his preliminary
study less independently, to make it in fact a
means to a more important end rather than an
absorbing object in itself. With this change of
intention grew up, as well, impatience of any
medium which would cramp him in rapidity of
realisation. His studies were becoming simply
preparatory exercises, and his object was then to
complete them with all reasonable speed so that
he might get to work upon the more engrossing
efforts for which they served to clear the ground.
So he substituted for pencil more responsive
materials, black chalk and wash, working on tinted
paper so as to save time in arriving at the relation
of the various tones. Indeed, by the variations in
the material and paper may be to some extent
established the dates of his sketches. To drawings
in fine lead pencil on ordinary drawing paper,
succeeded pencil or chalk sketches on a kind of
rough sugar paper often with shadows washed in
and with high lights of Chinese white. These
were followed by a combination of black and