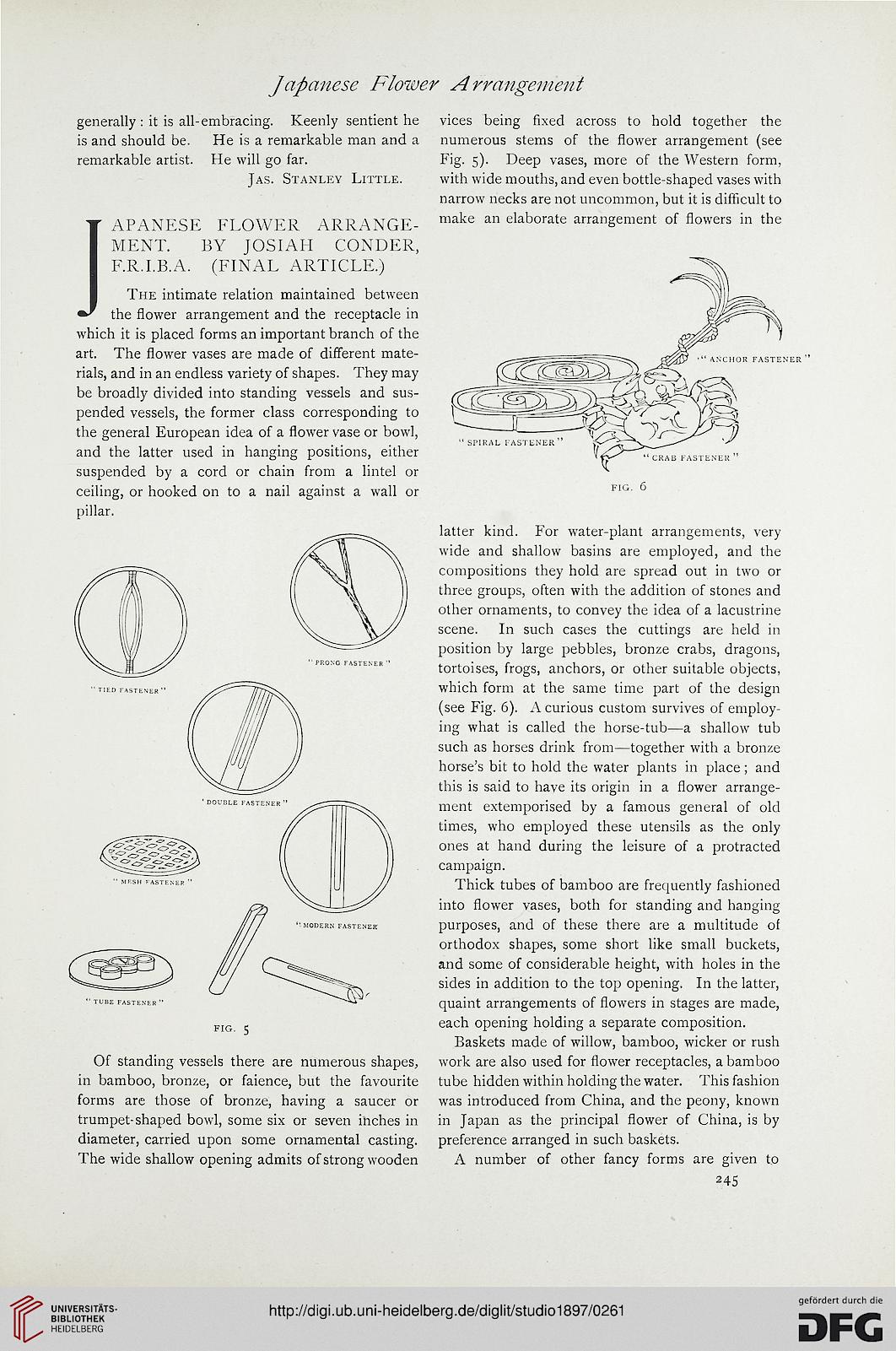 generally : it is all-embracing. Keenly sentient he
is and should be. He is a remarkable man and a
remarkable artist. He will go far.

JAPANESE FLOWER ARRANGE-
MENT. BY JOSIAH CONDER,
F.R.I.B.A. (FINAL ARTICLE.)
The intimate relation maintained between
the flower arrangement and the receptacle in
which it is placed forms an important branch of the
art. The flower vases are made of different mate-
rials, and in an endless variety of shapes. They may
be broadly divided into standing vessels and sus-
pended vessels, the former class corresponding to
the general European idea of a flower vase or bowl,
and the latter used in hanging positions, either
suspended by a cord or chain from a lintel or
ceiling, or hooked on to a nail against a wall or
pillar.

Of standing vessels there are numerous shapes,
in bamboo, bronze, or faience, but the favourite
forms are those of bronze, having a saucer or
trumpet-shaped bowl, some six or seven inches in
diameter, carried upon some ornamental casting.
The wide shallow opening admits of strong wooden

vices being fixed across to hold together the
numerous stems of the flower arrangement (see
Fig. 5). Deep vases, more of the Western form,
with wide mouths, and even bottle-shaped vases with
narrow necks are not uncommon, but it is difficult to
make an elaborate arrangement of flowers in the

latter kind. For water-plant arrangements, very
wide and shallow basins are employed, and the
compositions they hold are spread out in two or
three groups, often with the addition of stones and
other ornaments, to convey the idea of a lacustrine
scene. In such cases the cuttings are held in
position by large pebbles, bronze crabs, dragons,
tortoises, frogs, anchors, or other suitable objects,
which form at the same time part of the design
(see Fig. 6). A curious custom survives of employ-
ing what is called the horse-tub—a shallow tub
such as horses drink from—together with a bronze
horse's bit to hold the water plants in place; and
this is said to have its origin in a flower arrange-
ment extemporised by a famous general of old
times, who employed these utensils as the only
ones at hand during the leisure of a protracted
campaign.

Thick tubes of bamboo are frequently fashioned
into flower vases, both for standing and hanging
purposes, and of these there are a multitude of
orthodox shapes, some short like small buckets,
and some of considerable height, with holes in the
sides in addition to the top opening. In the latter,
quaint arrangements of flowers in stages are made,
each opening holding a separate composition.

Baskets made of willow, bamboo, wicker or rush
work are also used for flower receptacles, a bamboo
tube hidden within holding the water. This fashion
was introduced from China, and the peony, known
in Japan as the principal flower of China, is by
preference arranged in such baskets.

A number of other fancy forms are given to