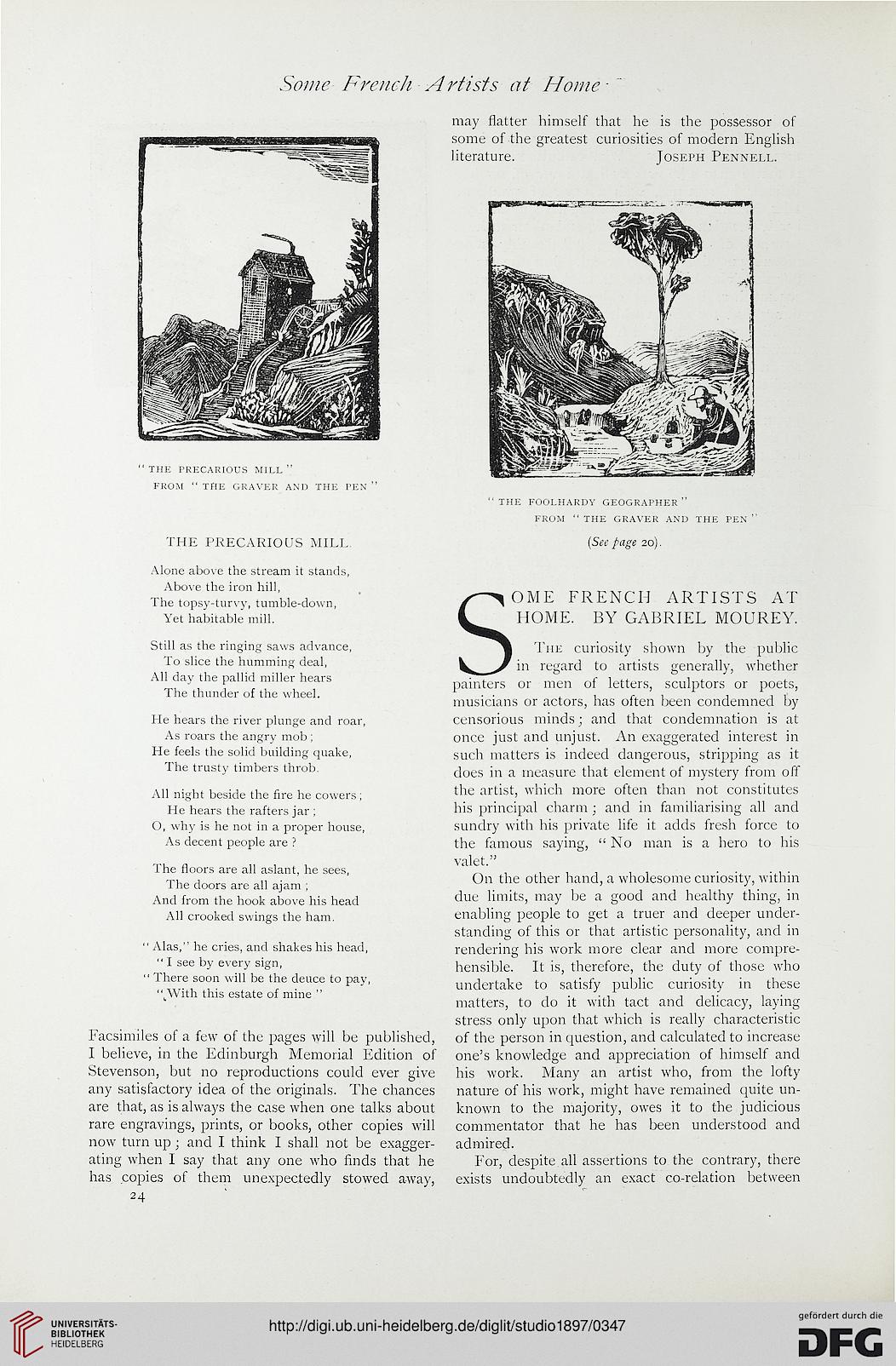 FROM " THE GRAVER AND THE PEN "

Alone above the stream it stands,

Above the iron hill,
The topsy-turvy, tumble-down,

Still as the ringing saws advance,

To slice the humming deal,
All clay the pallid miller hears

The thunder of the wheel.

He hears the river plunge and roar,

As roars the angry mob ;
He feels the solid building quake,

All night beside the fire he cowers ;

He hears the rafters jar ;
O, why is he not in a proper house,

As decent people are ?

The floors are all aslant, he sees,

The doors are all ajam ;
And from the hook above his head

All crooked swings the ham.

" I see by every sign,
" There soon will be the deuce to pay,

"tWith this estate of mine "

Facsimiles of a few of the pages will be published,
I believe, in the Edinburgh Memorial Edition of
Stevenson, but no reproductions could ever give
any satisfactory idea of the originals. The chances
are that, as is always the case when one talks about
rare engravings, prints, or books, other copies will
now turn up; and I think I shall not be exagger-
ating when I say that any one who finds that he
has copies of them unexpectedly stowed away,
24

may flatter himself that he is the possessor of
some of the greatest curiosities of modern English
literature. Joseph Pennell.

FROM " THE GRAVER AND THE PEN "

SOME FRENCH ARTISTS AT
HOME. BY GABRIEL MOUREY.
Tin; curiosity shown by the public
in regard to artists generally, whether
painters or men of letters, sculptors or poets,
musicians or actors, has often been condemned by
censorious minds; and that condemnation is at
once just and unjust. An exaggerated interest in
such matters is indeed dangerous, stripping as it
does in a measure that element of mystery from off
the artist, which more often than not constitutes
his principal charm ; and in familiarising all and
sundry with his private life it adds fresh force to
the famous saying, " No man is a hero to his
valet."

On the other hand, a wholesome curiosity, within
due limits, may be a good and healthy thing, in
enabling people to get a truer and deeper under-
standing of this or that artistic personality, and in
rendering his work more clear and more compre-
hensible. It is, therefore, the duty of those who
undertake to satisfy public curiosity in these
matters, to do it with tact and delicacy, laying
stress only upon that which is really characteristic
of the person in question, and calculated to increase
one's knowledge and appreciation of himself and
his work. Many an artist who, from the lofty
nature of his work, might have remained quite un-
known to the majority, owes it to the judicious
commentator that he has been understood and
admired.

For, despite all assertions to the contrary, there
exists undoubtedly an exact co-relation between