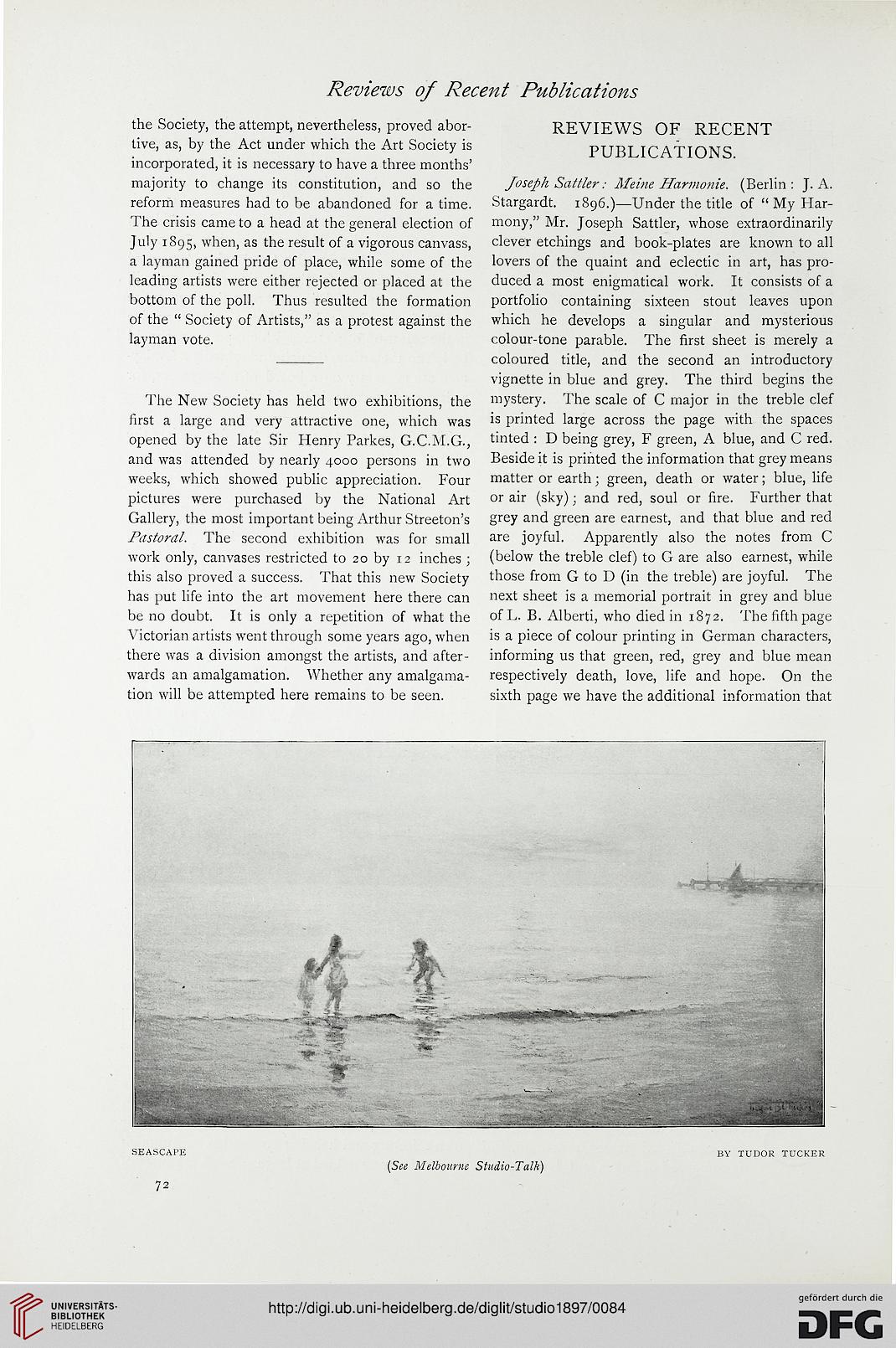 the Society, the attempt, nevertheless, proved abor-
tive, as, by the Act under which the Art Society is
incorporated, it is necessary to have a three months'
majority to change its constitution, and so the
reform measures had to be abandoned for a time.
The crisis came to a head at the general election of
July 1895, when, as the result of a vigorous canvass,
a layman gained pride of place, while some of the
leading artists were either rejected or placed at the
bottom of the poll. Thus resulted the formation
of the " Society of Artists," as a protest against the
layman vote.

The New Society has held two exhibitions, the
first a large and very attractive one, which was
opened by the late Sir Henry Parkes, G.C.M.G.,
and was attended by nearly 4000 persons in two
weeks, which showed public appreciation. Four
pictures were purchased by the National Art
Gallery, the most important being Arthur Streeton's
Pastoral. The second exhibition was for small
work only, canvases restricted to 20 by 12 inches ;
this also proved a success. That this new Society
has put life into the art movement here there can
be no doubt. It is only a repetition of what the
Victorian artists went through some years ago, when
there was a division amongst the artists, and after-
wards an amalgamation. Whether any amalgama-
tion will be attempted here remains to be seen.

Joseph Sattler: Meine Harmonic (Berlin: J. A.
Stargardt. 1896.)—Under the title of " My Har-
mony," Mr. Joseph Sattler, whose extraordinarily
clever etchings and book-plates are known to all
lovers of the quaint and eclectic in art, has pro-
duced a most enigmatical work. It consists of a
portfolio containing sixteen stout leaves upon
which he develops a singular and mysterious
colour-tone parable. The first sheet is merely a
coloured title, and the second an introductory
vignette in blue and grey. The third begins the
mystery. The scale of C major in the treble clef
is printed large across the page with the spaces
tinted : D being grey, F green, A blue, and C red.
Beside it is printed the information that grey means
matter or earth; green, death or water; blue, life
or air (sky); and red, soul or fire. Further that
grey and green are earnest, and that blue and red
are joyful. Apparently also the notes from C
(below the treble clef) to G are also earnest, while
those from G to D (in the treble) are joyful. The
next sheet is a memorial portrait in grey and blue
of L. B. Alberti, who died in 1872. The fifth page
is a piece of colour printing in German characters,
informing us that green, red, grey and blue mean
respectively death, love, life and hope. On the
sixth page we have the additional information that