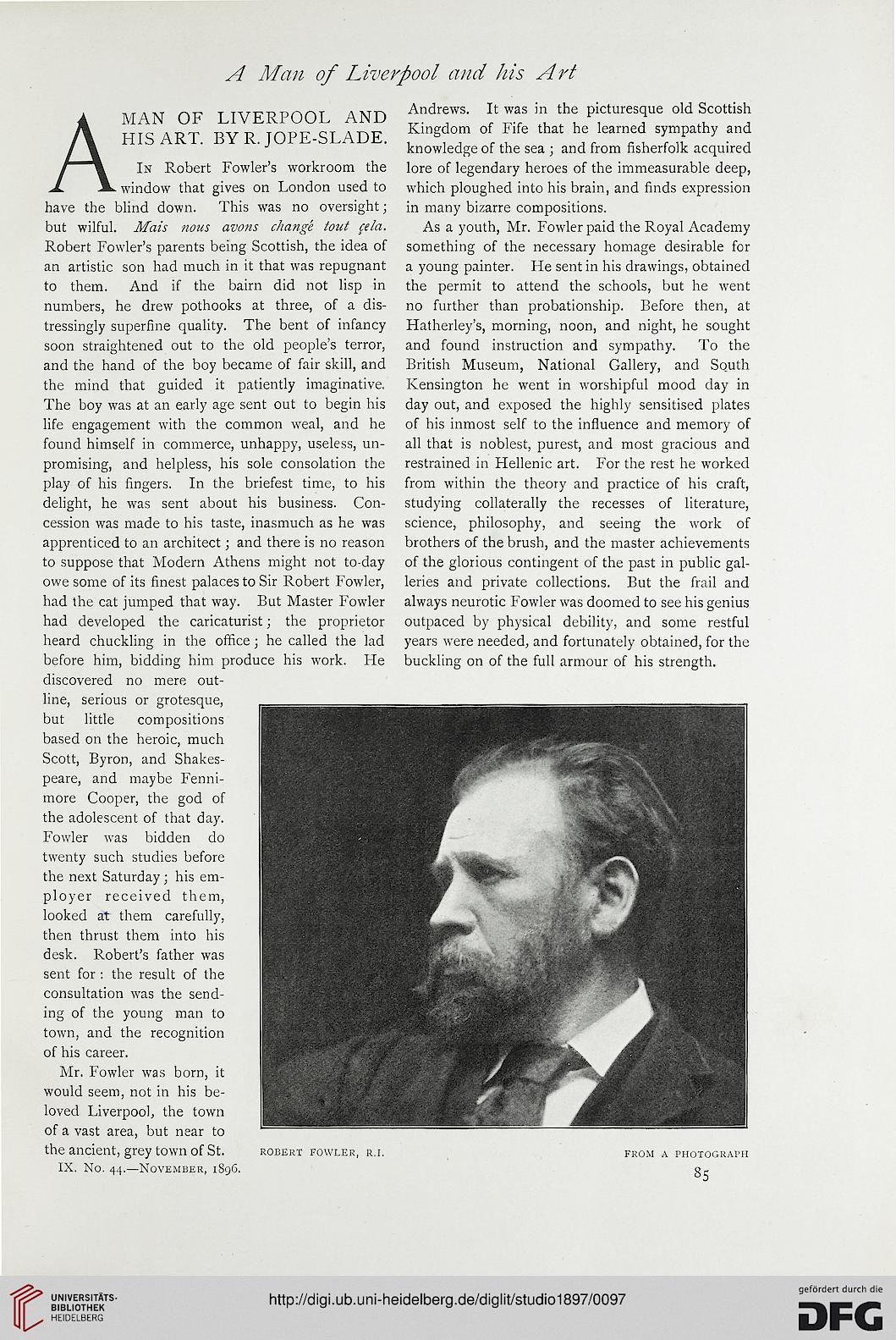 Information about OCR text
A Man of Liverpool and his Art

,,.XT ^„ TnrrTmnAT a vtt^ Andrews. It was in the picturesque old Scottish
MAN OF LIVERPOOL AND *\ J

Kingdom of Fife that he learned sympathy and

Axxi^-xvxvx. ^ A xv. j x- ]cnowie(jge of the sea ; and from fisherfolk acquired

In Robert Fowler's workroom the lore of legendary heroes of the immeasurable deep,
window that gives on London used to which ploughed into his brain, and finds expression
have the blind down. This was no oversight; in many bizarre compositions,
but wilful. Mats nous avons change tout fe/a. As a youth, Mr. Fowler paid the Royal Academy
Robert Fowler's parents being Scottish, the idea of something of the necessary homage desirable for
an artistic son had much in it that was repugnant a young painter. He sent in his drawings, obtained
to them. And if the bairn did not lisp in the permit to attend the schools, but he went
numbers, he drew pothooks at three, of a dis- no further than probationship. Before then, at
tressingly superfine quality. The bent of infancy Hatherley's, morning, noon, and night, he sought
soon straightened out to the old people's terror, and found instruction and sympathy. To the
and the hand of the boy became of fair skill, and British Museum, National Gallery, and South
the mind that guided it patiently imaginative. Kensington he went in worshipful mood day in
The boy was at an early age sent out to begin his day out, and exposed the highly sensitised plates
life engagement with the common weal, and he of his inmost self to the influence and memory of
found himself in commerce, unhappy, useless, un- all that is noblest, purest, and most gracious and
promising, and helpless, his sole consolation the restrained in Hellenic art. For the rest he worked
play of his fingers. In the briefest time, to his from within the theory and practice of his craft,
delight, he was sent about his business. Con- studying collaterally the recesses of literature,
cession was made to his taste, inasmuch as he was science, philosophy, and seeing the work of
apprenticed to an architect; and there is no reason brothers of the brush, and the master achievements
to suppose that Modern Athens might not to-day of the glorious contingent of the past in public gal-
owe some of its finest palaces to Sir Robert Fowler, leries and private collections. But the frail and
had the cat jumped that way. But Master Fowler always neurotic Fowler was doomed to see his genius
had developed the caricaturist; the proprietor outpaced by physical debility, and some restful
heard chuckling in the office ; he called the lad years were needed, and fortunately obtained, for the
before him, bidding him produce his work. He buckling on of the full armour of his strength,
discovered no mere out-
line, serious or grotesque,
but little compositions
based on the heroic, much
Scott, Byron, and Shakes-
peare, and maybe Fenni-
more Cooper, the god of
the adolescent of that day.
Fowler was bidden do
twenty such studies before
the next Saturday ; his em-
ployer received them,
looked at them carefully,
then thrust them into his
desk. Robert's father was
sent for : the result of the
consultation was the send-
ing of the young man to
town, and the recognition
of his career.

Mr. Fowler was born, it
would seem, not in his be-
loved Liverpool, the town
of a vast area, but near to

the ancient, grey town of St. robert fowler, r.i. from a photograph