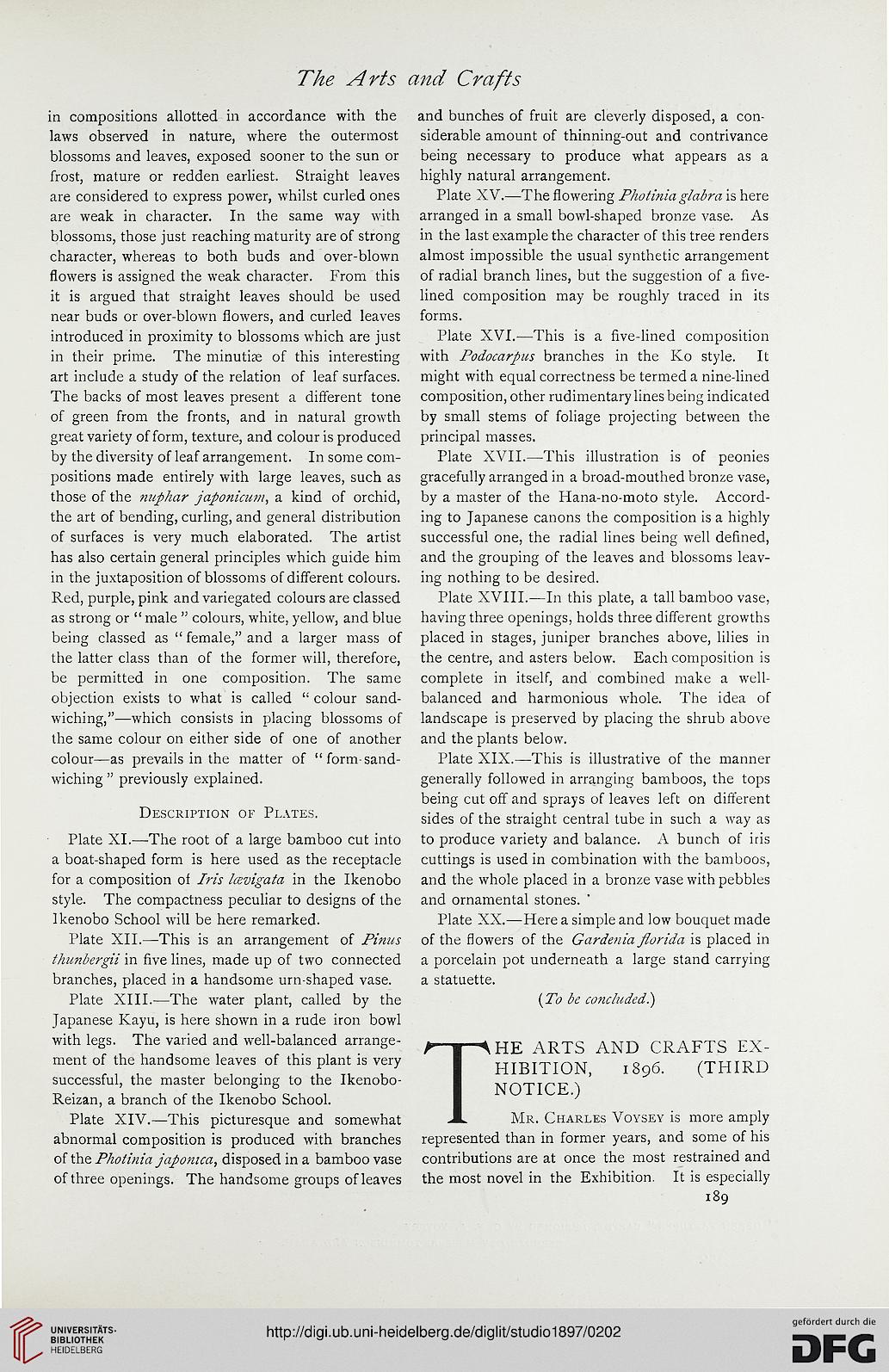 in compositions allotted in accordance with the
laws observed in nature, where the outermost
blossoms and leaves, exposed sooner to the sun or
frost, mature or redden earliest. Straight leaves
are considered to express power, whilst curled ones
are weak in character. In the same way with
blossoms, those just reaching maturity are of strong
character, whereas to both buds and over-blown
flowers is assigned the weak character. From this
it is argued that straight leaves should be used
near buds or over-blown flowers, and curled leaves
introduced in proximity to blossoms which are just
in their prime. The minutiae of this interesting
art include a study of the relation of leaf surfaces.
The backs of most leaves present a different tone
of green from the fronts, and in natural growth
great variety of form, texture, and colour is produced
by the diversity of leaf arrangement. In some com-
positions made entirely with large leaves, such as
those of the nuphar jafionicwn, a kind of orchid,
the art of bending, curling, and general distribution
of surfaces is very much elaborated. The artist
has also certain general principles which guide him
in the juxtaposition of blossoms of different colours.
Red, purple, pink and variegated colours are classed
as strong or " male " colours, white, yellow, and blue
being classed as " female," and a larger mass of
the latter class than of the former will, therefore,
be permitted in one composition. The same
objection exists to what is called " colour sand-
wiching,"—which consists in placing blossoms of
the same colour on either side of one of another
colour—as prevails in the matter of "form-sand-
wiching " previously explained.

Plate XL—The root of a large bamboo cut into
a boat-shaped form is here used as the receptacle
for a composition of Iris laevigata in the Ikenobo
style. The compactness peculiar to designs of the
Ikenobo School will be here remarked.

Plate XII.—This is an arrangement of Finns
thunbergii in five lines, made up of two connected
branches, placed in a handsome urn-shaped vase.

Plate XIII.—The water plant, called by the
Japanese Kayu, is here shown in a rude iron bowl
with legs. The varied and well-balanced arrange-
ment of the handsome leaves of this plant is very
successful, the master belonging to the Ikenobo-
Reizan, a branch of the Ikenobo School.

Plate XIV.—This picturesque and somewhat
abnormal composition is produced with branches
of the Photinia jafionica, disposed in a bamboo vase
of three openings. The handsome groups of leaves

and bunches of fruit are cleverly disposed, a con-
siderable amount of thinning-out and contrivance
being necessary to produce what appears as a
highly natural arrangement.

Plate XV.—The flowering Photinia glabra is here
arranged in a small bowl-shaped bronze vase. As
in the last example the character of this tree renders
almost impossible the usual synthetic arrangement
of radial branch lines, but the suggestion of a five-
lined composition may be roughly traced in its
forms.

Plate XVI.—This is a five-lined composition
with Podocarpus branches in the Ko style. It
might with equal correctness be termed a nine-lined
composition, other rudimentary lines being indicated
by small stems of foliage projecting between the
principal masses.

Plate XVII.—This illustration is of peonies
gracefully arranged in a broad-mouthed bronze vase,
by a master of the Hana-no-moto style. Accord-
ing to Japanese canons the composition is a highly
successful one, the radial lines being well denned,
and the grouping of the leaves and blossoms leav-
ing nothing to be desired.

Plate XVIII.—In this plate, a tall bamboo vase,
having three openings, holds three different growths
placed in stages, juniper branches above, lilies in
the centre, and asters below. Each composition is
complete in itself, and combined make a well-
balanced and harmonious whole. The idea of
landscape is preserved by placing the shrub above
and the plants below.

Plate XIX.—This is illustrative of the manner
generally followed in arranging bamboos, the tops
being cut off and sprays of leaves left on different
sides of the straight central tube in such a way as
to produce variety and balance. A bunch of iris
cuttings is used in combination with the bamboos,
and the whole placed in a bronze vase with pebbles
and ornamental stones.

Plate XX.—Here a simple and low bouquet made
of the flowers of the Gardenia florida is placed in
a porcelain pot underneath a large stand carrying
a statuette.

THE ARTS AND CRAFTS EX-
HIBITION, 1896. (THIRD
NOTICE.)
Mr. Charles Voysey is more amply
represented than in former years, and some of his
contributions are at once the most restrained and
the most novel in the Exhibition. It is especially