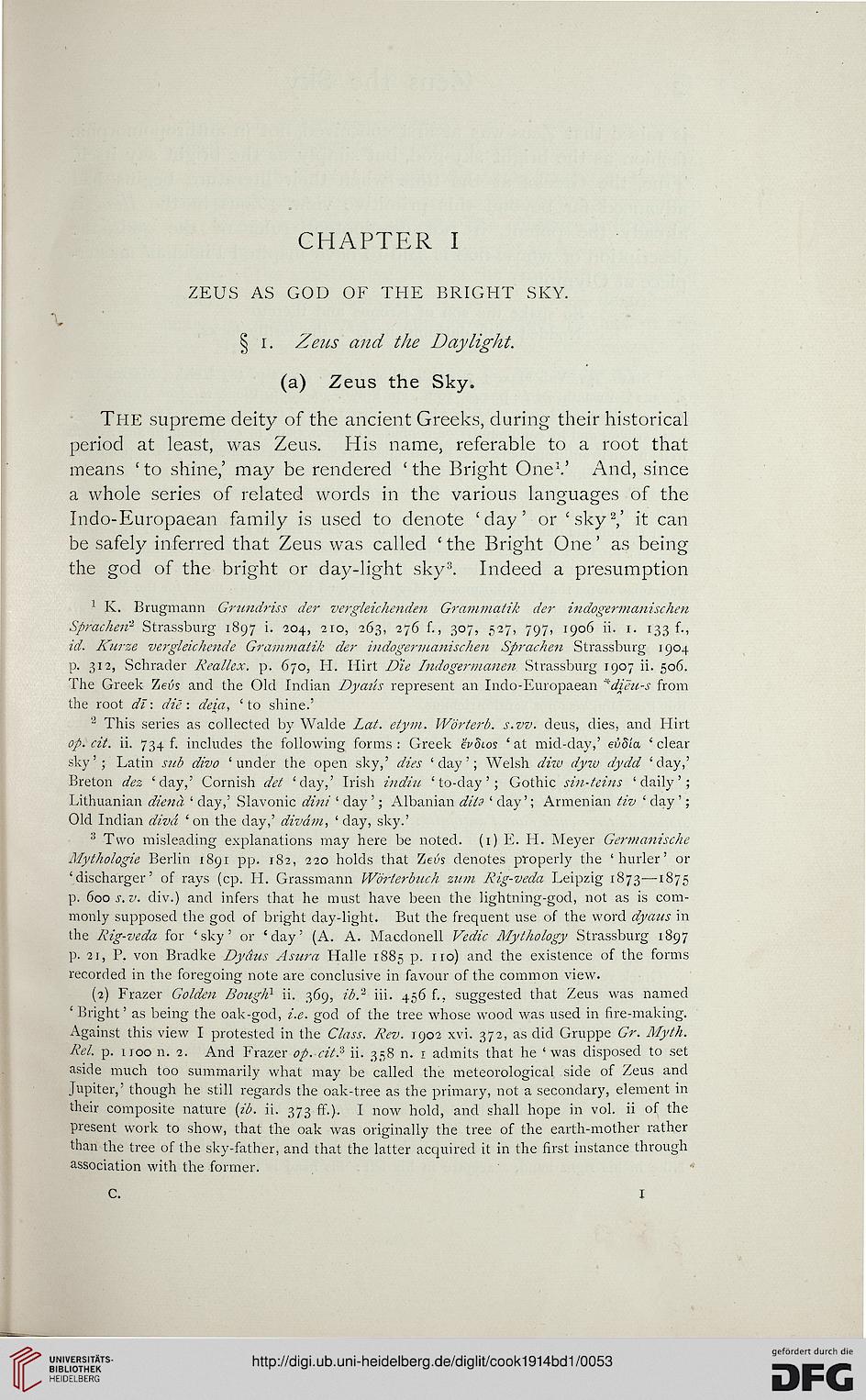 ZEUS AS GOD OF THE BRIGHT SKY.

The supreme deity of the ancient Greeks, during their historical
period at least, was Zeus. His name, referable to a root that
means ' to shine,' may be rendered ' the Bright One1.' And, since
a whole series of related words in the various languages of the
Indo-Europaean family is used to denote 'day' or 'sky2,' it can
be safely inferred that Zeus was called ' the Bright One' as being
the god of the bright or day-light sky3. Indeed a presumption

3 Two misleading explanations may here be noted. (1) E. H. Meyer Germanische
Mythologie Berlin 1891 pp. 182, 220 holds that Zeus denotes properly the 'hurler' or
'discharger' of rays (cp. h. Grassmann Worterbuch zum Rig-veda Leipzig 1873—1875
p. 600 s. v. div.) and infers that he must have been the lightning-god, not as is com-
monly supposed the god of bright day-light. But the frequent use of the word dyaus in
the Rig-veda for 'sky' or 'day' (A. A. Macdonell Vedic Mythology Strassburg 1897
p. 21, P. von Bradke Dyaus Asura Halle 1885 p. no) and the existence of the forms
recorded in the foregoing note are conclusive in favour of the common view.

(2) Frazer Golden Bough1 ii. 369, ib.2 iii. 456 f.. suggested that Zeus was named
' Bright' as being the oak-god, i.e. god of the tree whose wood was used in fire-making.
Against this view I protested in the Class. Rev. 1902 xvi. 372, as did Gruppe Gr. Myth.
Rel. p. 1100 n. 2. And Frazer op. cit? ii. 358 n. 1 admits that he 'was disposed to set
aside much too summarily what may be called the meteorological side of Zeus and
Jupiter,' though he still regards the oak-tree as the primary, not a secondary, element in
their composite nature (ib. ii. 373 ff.). I now hold, and shall hope in vol. ii of the
present work to show, that the oak was originally the tree of the earth-mother rather
than the tree of the sky-father, and that the latter acquired it in the first instance through
association with the former.