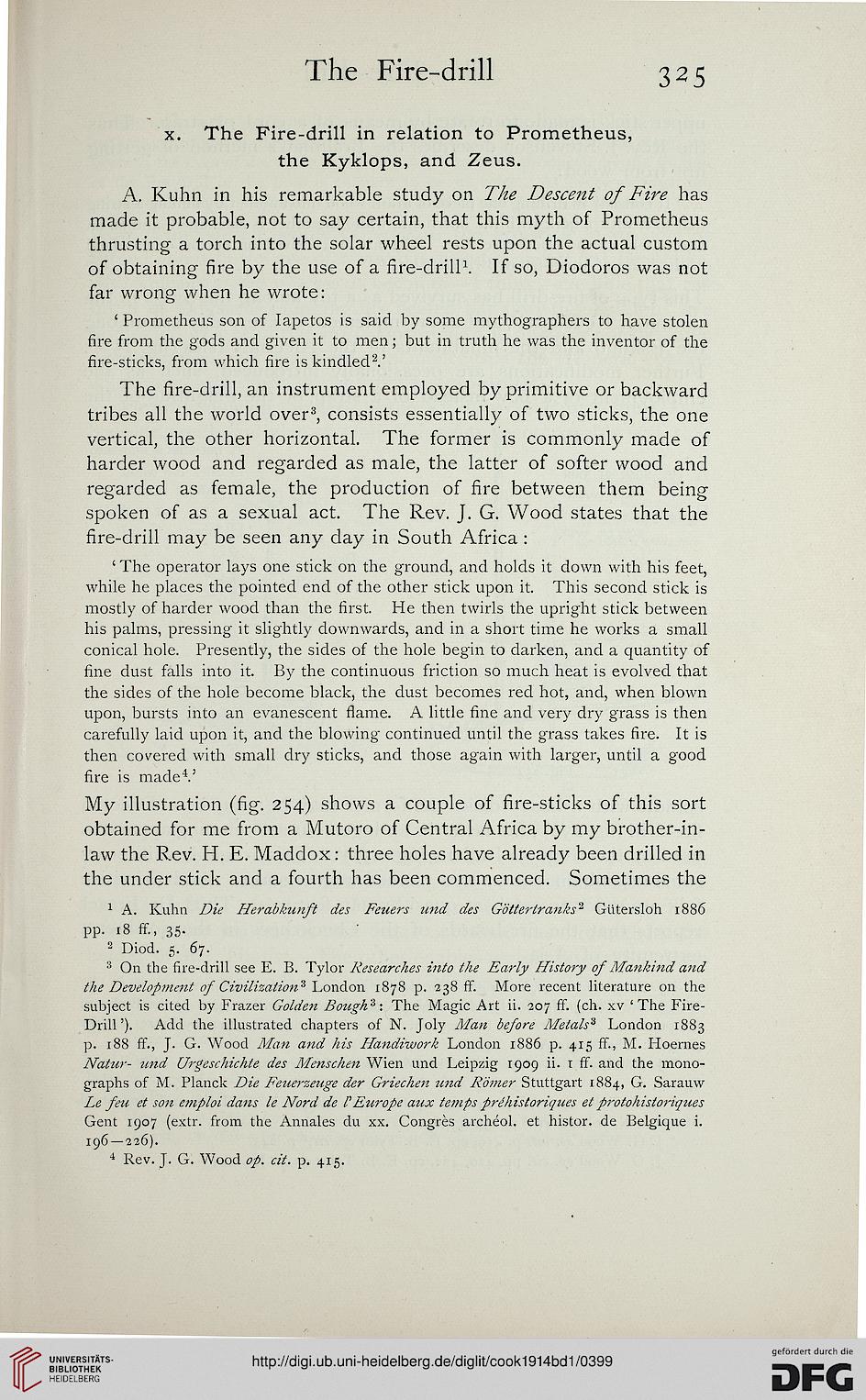 Information about OCR text
The Fire-drill

x. The Fire-drill in relation to Prometheus,
the Kyklops, and Zeus.

A. Kuhn in his remarkable study on The Descent of Fire has
made it probable, not to say certain, that this myth of Prometheus
thrusting a torch into the solar wheel rests upon the actual custom
of obtaining fire by the use of a fire-drill1. If so, Diodoros was not
far wrong when he wrote:

' Prometheus son of Iapetos is said by some mythographers to have stolen
fire from the gods and given it to men; but in truth he was the inventor of the
fire-sticks, from which fire is kindled2.'

The fire-drill, an instrument employed by primitive or backward
tribes all the world over3, consists essentially of two sticks, the one
vertical, the other horizontal. The former is commonly made of
harder wood and regarded as male, the latter of softer wood and
regarded as female, the production of fire between them being
spoken of as a sexual act. The Rev. J. G. Wood states that the
fire-drill may be seen any day in South Africa :

' The operator lays one stick on the ground, and holds it down with his feet,
while he places the pointed end of the other stick upon it. This second stick is
mostly of harder wood than the first. He then twirls the upright stick between
his palms, pressing it slightly downwards, and in a short time he works a small
conical hole. Presently, the sides of the hole begin to darken, and a quantity of
fine dust falls into it. By the continuous friction so much heat is evolved that
the sides of the hole become black, the dust becomes red hot, and, when blown
upon, bursts into an evanescent flame. A little fine and very dry grass is then
carefully laid upon it, and the blowing continued until the grass takes fire. It is
then covered with small dry sticks, and those again with larger, until a good
fire is made4.'

My illustration (fig. 254) shows a couple of fire-sticks of this sort
obtained for me from a Mutoro of Central Africa by my brother-in-
law the Rev. H. E. Maddox: three holes have already been drilled in
the under stick and a fourth has been commenced. Sometimes the