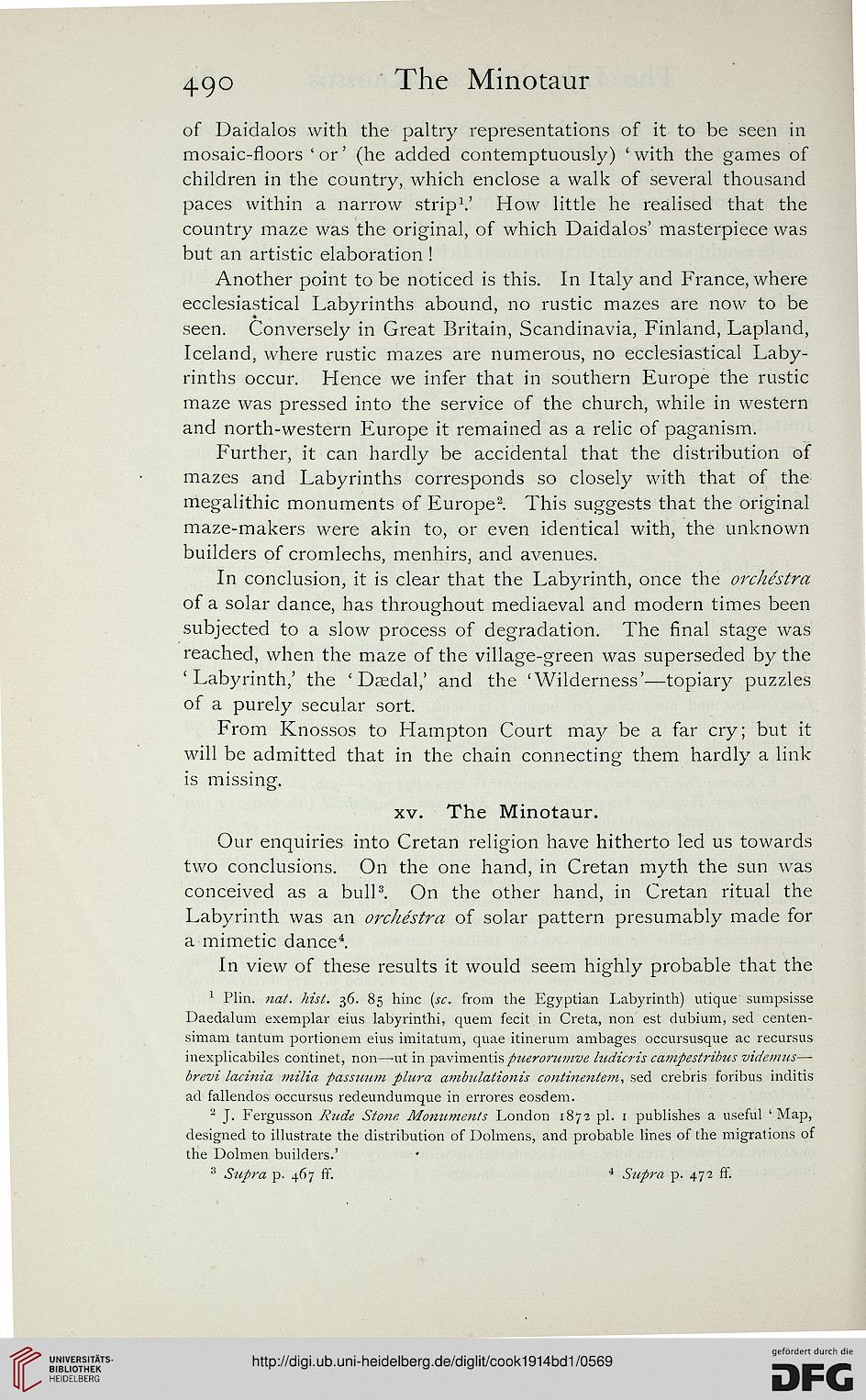 of Daidalos with the paltry representations of it to be seen in
mosaic-floors ' or' (he added contemptuously) ' with the games of
children in the country, which enclose a walk of several thousand
paces within a narrow strip1.' How little he realised that the
country maze was the original, of which Daidalos' masterpiece was
but an artistic elaboration !

Another point to be noticed is this. In Italy and France, where
ecclesiastical Labyrinths abound, no rustic mazes are now to be
seen. Conversely in Great Britain, Scandinavia, Finland, Lapland,
Iceland, where rustic mazes are numerous, no ecclesiastical Laby-
rinths occur. Hence we infer that in southern Europe the rustic
maze was pressed into the service of the church, while in western
and north-western Europe it remained as a relic of paganism.

Further, it can hardly be accidental that the distribution of
mazes and Labyrinths corresponds so closely with that of the
megalithic monuments of Europe2. This suggests that the original
maze-makers were akin to, or even identical with, the unknown
builders of cromlechs, menhirs, and avenues.

In conclusion, it is clear that the Labyrinth, once the orchestra
of a solar dance, has throughout mediaeval and modern times been
subjected to a slow process of degradation. The final stage was
reached, when the maze of the village-green was superseded by the
'Labyrinth,' the 'Daedal,' and the 'Wilderness'—topiary puzzles
of a purely secular sort.

From Knossos to Hampton Court may be a far cry; but it
will be admitted that in the chain connecting them hardly a link
is missing.

Our enquiries into Cretan religion have hitherto led us towards
two conclusions. On the one hand, in Cretan myth the sun was
conceived as a bull3. On the other hand, in Cretan ritual the
Labyrinth was an orchestra of solar pattern presumably made for
a mimetic dance4.

2 J. Fergusson Rude Stone Monuments London 1872 pi. 1 publishes a useful ' Map,
designed to illustrate the distribution of Dolmens, and probable lines of the migrations of
the Dolmen builders.'