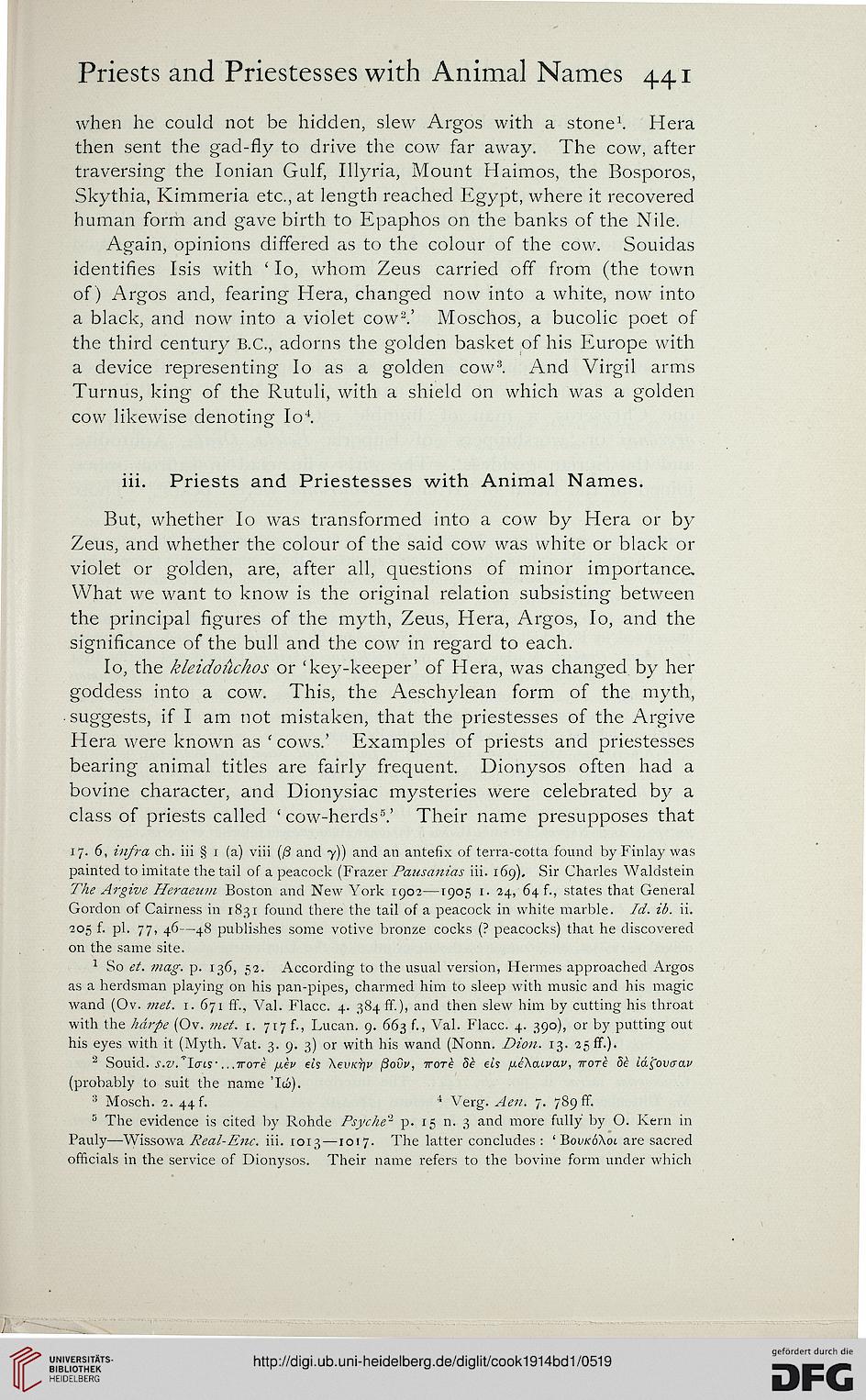 Information about OCR text
Priests and Priestesses with Animal Names 441

when he could not be hidden, slew Argos with a stone1. Hera
then sent the gad-fly to drive the cow far away. The cow, after
traversing the Ionian Gulf, Illyria, Mount Haimos, the Bosporos,
Skythia, Kimmeria etc., at length reached Egypt, where it recovered
human form and gave birth to Epaphos on the banks of the Nile.

Again, opinions differed as to the colour of the cow. Souidas
identifies Isis with ' Io, whom Zeus carried off from (the town
of ) Argos and, fearing Hera, changed now into a white, now into
a black, and now into a violet cow2.' Moschos, a bucolic poet of
the third century B.C., adorns the golden basket of his Europe with
a device representing Io as a golden cow3. And Virgil arms
Turnus, king of the Rutuli, with a shield on which was a golden
cow likewise denoting Io4.

But, whether Io was transformed into a cow by Hera or by
Zeus, and whether the colour of the said cow was white or black or
violet or golden, are, after all, questions of minor importance.
What we want to know is the original relation subsisting between
the principal figures of the myth, Zeus, Hera, Argos, Io, and the
significance of the bull and the cow in regard to each.

Io, the kleidouchos or 'key-keeper' of Hera, was changed by her
goddess into a cow. This, the Aeschylean form of the myth,
suggests, if I am not mistaken, that the priestesses of the Argive
Hera were known as ' cows.' Examples of priests and priestesses
bearing animal titles are fairly frequent. Dionysos often had a
bovine character, and Dionysiac mysteries were celebrated by a
class of priests called 'cow-herds5.' Their name presupposes that

5 The evidence is cited by Rohde Psyche2 p. 15 n. 3 and more fully by O. Kern in
Pauly—Wissowa Real-Enc. iii. 1013 —1017. The latter concludes : ' BovkoXol are sacred
officials in the service of Dionysos. Their name refers to the bovine form under which