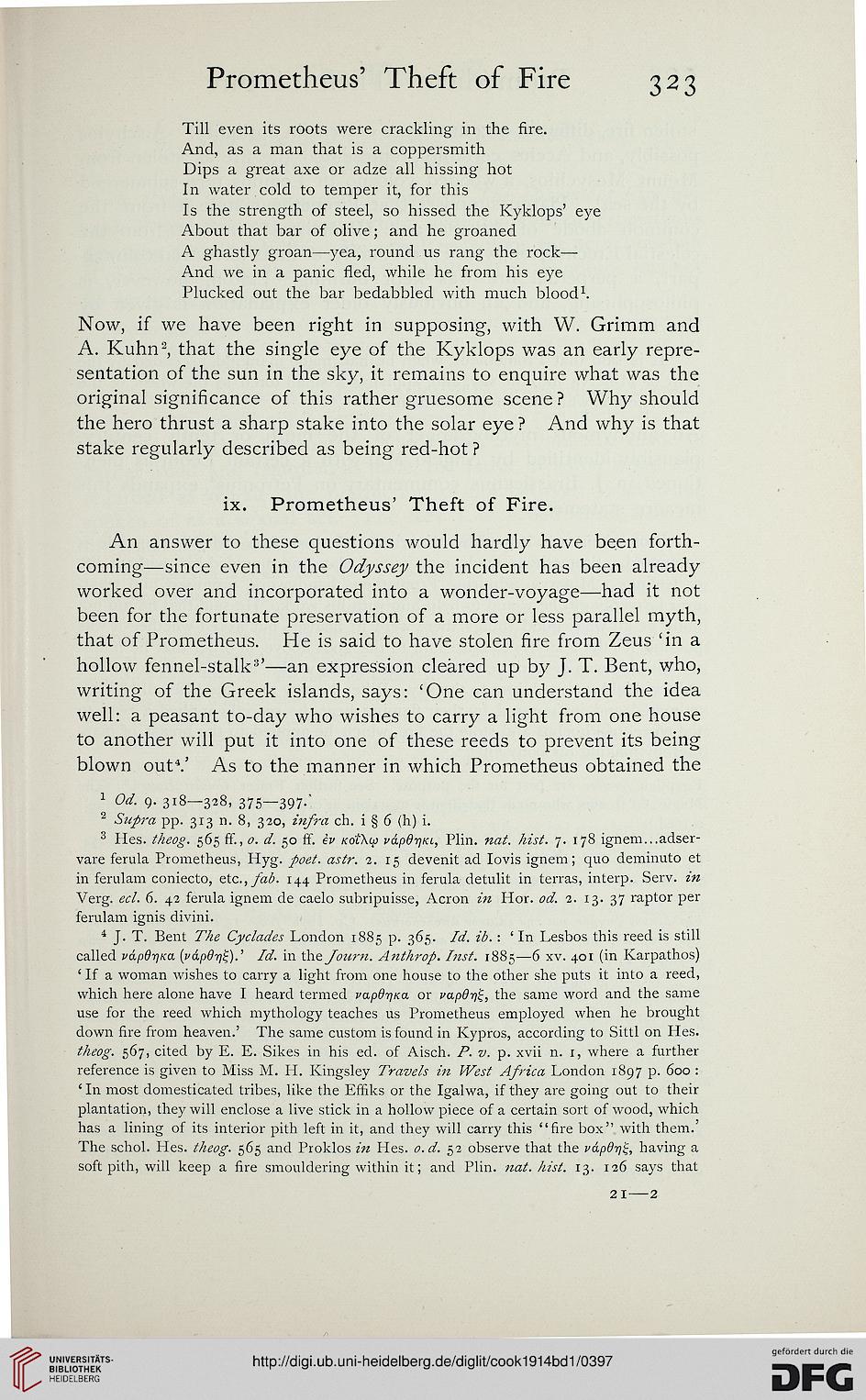 Till even its roots were crackling in the fire.
And, as a man that is a coppersmith
Dips a great axe or adze all hissing hot
In water cold to temper it, for this
Is the strength of steel, so hissed the Kyklops' eye
About that bar of olive; and he groaned
A ghastly groan—yea, round us rang the rock—
And we in a panic fled, while he from his eye
Plucked out the bar bedabbled with much blood1.

Now, if we have been right in supposing, with W. Grimm and
A. Kuhn2, that the single eye of the Kyklops was an early repre-
sentation of the sun in the sky, it remains to enquire what was the
original significance of this rather gruesome scene? Why should
the hero thrust a sharp stake into the solar eye ? And why is that
stake regularly described as being red-hot ?

An answer to these questions would hardly have been forth-
coming—since even in the Odyssey the incident has been already
worked over and incorporated into a wonder-voyage—had it not
been for the fortunate preservation of a more or less parallel myth,
that of Prometheus. He is said to have stolen fire from Zeus 'in a
hollow fennel-stalk3'—an expression cleared up by J. T. Bent, who,
writing of the Greek islands, says: 'One can understand the idea
well: a peasant to-day who wishes to carry a light from one house
to another will put it into one of these reeds to prevent its being
blown out4.' As to the manner in which Prometheus obtained the

4 J. T. Bent The Cyclades London 1885 p. 365. Id. id. : ' In Lesbos this reed is still
called vdp9r]Ka [vdpdrj^).'' Id. in the Journ. Anthrop. Inst. 1885—6 xv. 401 (in Karpathos)
'If a woman wishes to carry a light from one house to the other she puts it into a reed,
which here alone have I heard termed vapd-rjKa or vapdrj^, the same word and the same
use for the reed which mythology teaches us Prometheus employed when he brought
down fire from heaven.' The same custom is found in Kypros, according to Sittl on Hes.
theog. 567, cited by E. E. Sikes in his ed. of Aisch. P. v. p. xvii n. r, where a further
reference is given to Miss M. H. Kingsley Travels in West Africa London 1897 p. 600 :
' In most domesticated tribes, like the Effiks or the Igalwa, if they are going out to their
plantation, they will enclose a live stick in a hollow piece of a certain sort of wood, which
has a lining of its interior pith left in it, and they will carry this "fire box" with them.'
The schol. Hes. theog. 565 and Proklos in Hes. o.d. 52 observe that the vdpd-q^, having a
soft pith, will keep a fire smouldering within it; and Plin. nat. hist. 13. 126 says that