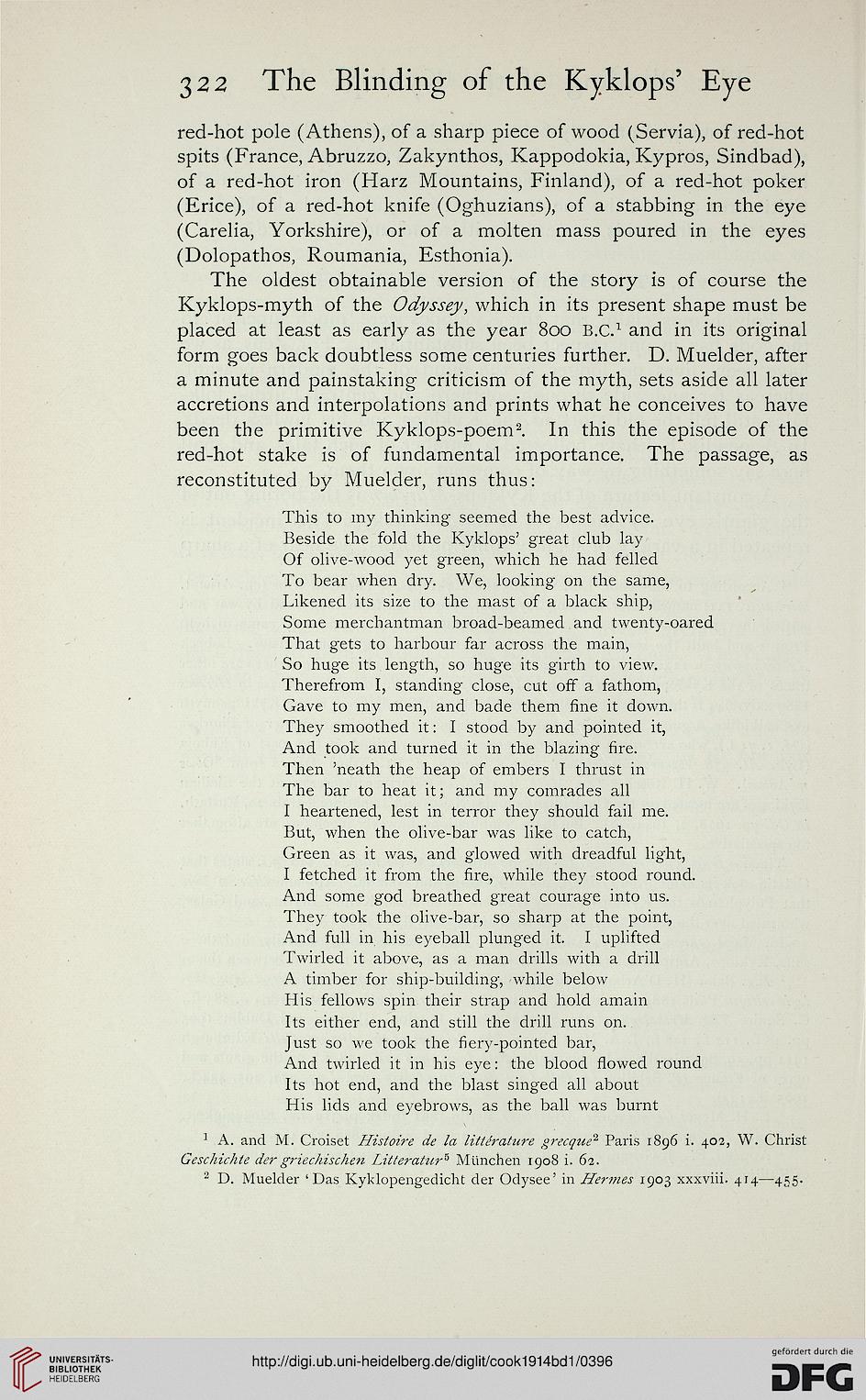 Information about OCR text
322 The Blinding of the Kyklops' Eye

red-hot pole (Athens), of a sharp piece of wood (Servia), of red-hot
spits (France, Abruzzo, Zakynthos, Kappodokia, Kypros, Sindbad),
of a red-hot iron (Harz Mountains, Finland), of a red-hot poker
(Erice), of a red-hot knife (Oghuzians), of a stabbing in the eye
(Carelia, Yorkshire), or of a molten mass poured in the eyes
(Dolopathos, Roumania, Esthonia).

The oldest obtainable version of the story is of course the
Kyklops-myth of the Odyssey, which in its present shape must be
placed at least as early as the year 800 B.C.1 and in its original
form goes back doubtless some centuries further. D. Muelder, after
a minute and painstaking criticism of the myth, sets aside all later
accretions and interpolations and prints what he conceives to have
been the primitive Kyklops-poem2. In this the episode of the
red-hot stake is of fundamental importance. The passage, as
reconstituted by Muelder, runs thus:

This to my thinking seemed the best advice.

Beside the fold the Kyklops' great club lay

Of olive-wood yet green, which he had felled

To bear when dry. We, looking on the same,

Likened its size to the mast of a black ship,

That gets to harbour far across the main,

Therefrom I, standing close, cut off a fathom,

Gave to my men, and bade them fine it down.

They smoothed it: I stood by and pointed it,

And took and turned it in the blazing fire.

Then 'neath the heap of embers I thrust in

The bar to heat it; and my comrades all

I heartened, lest in terror they should fail me.

Green as it was, and glowed with dreadful light,

I fetched it from the fire, while they stood round.

And some god breathed great courage into us.

They took the olive-bar, so sharp at the point,

And full in his eyeball plunged it. I uplifted

Twirled it above, as a man drills with a drill

A timber for ship-building, while below

His fellows spin their strap and hold amain

Its either end, and still the drill runs on.

Just so we took the fiery-pointed bar,

And twirled it in his eye: the blood flowed round

Its hot end, and the blast singed all about

His lids and eyebrows, as the ball was burnt