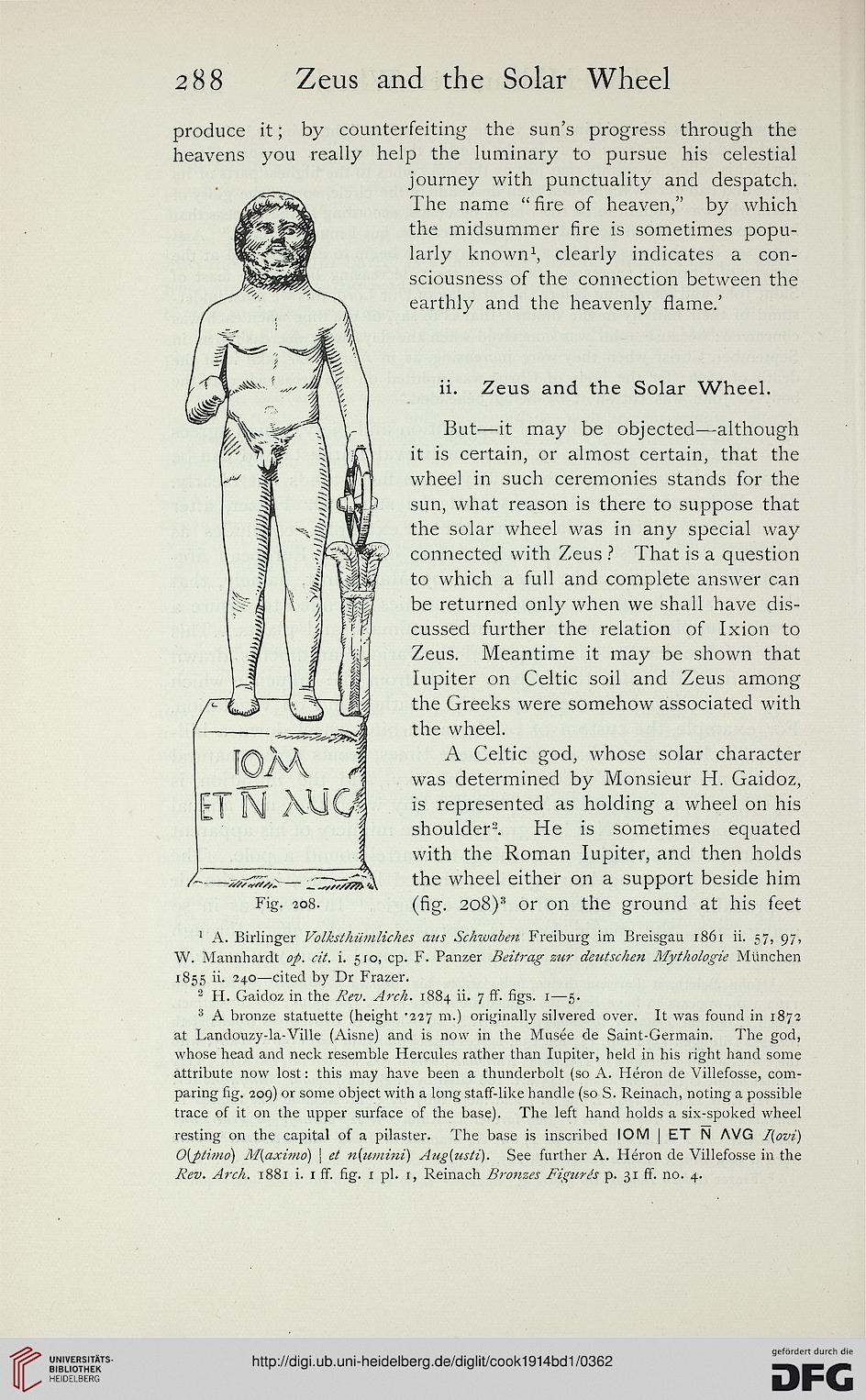 Information about OCR text
288 Zeus and the Solar Wheel

produce it; by counterfeiting the sun's progress through the
heavens you really help the luminary to pursue his celestial

journey with punctuality and despatch.
The name " fire of heaven," by which
the midsummer fire is sometimes popu-
larly known1, clearly indicates a con-
sciousness of the connection between the
earthly and the heavenly flame.'

ii. Zeus and the Solar Wheel.

But—it may be objected—although
it is certain, or almost certain, that the
wheel in such ceremonies stands for the
sun, what reason is there to suppose that
the solar wheel was in any special way
connected with Zeus ? That is a question
to which a full and complete answer can
be returned only when we shall have dis-
cussed further the relation of Ixion to
Zeus. Meantime it may be shown that
lupiter on Celtic soil and Zeus among
the Greeks were somehow associated with
the wheel.

A Celtic god, whose solar character
was determined by Monsieur H. Gaidoz,
is represented as holding a wheel on his
| shoulder2. He is sometimes equated
\ with the Roman lupiter, and then holds

3 A bronze statuette (height -227 m.) originally silvered over. It was found in 1872
at Landouzy-la-Ville (Aisne) and is now in the Musee de Saint-Germain. The god,
whose head and neck resemble Hercules rather than lupiter, held in his right hand some
attribute now lost: this may have been a thunderbolt (so A. Heron de Villefosse, com-
paring fig. 209) or some object with a long staff-like handle (so S. Reinach, noting a possible
trace of it on the upper surface of the base). The left hand holds a six-spoked wheel
resting on the capital of a pilaster. The base is inscribed IOM | ET N AVG I{ovi)
0(ptimo) M{aximo) \ et n(umini) Aug{usti). See further A. Heron de Villefosse in the
Rev. Arch. 1881 i. 1 ff. fig. 1 pi. 1, Reinach Bronzes Figure's p. 31 ff. no. 4.