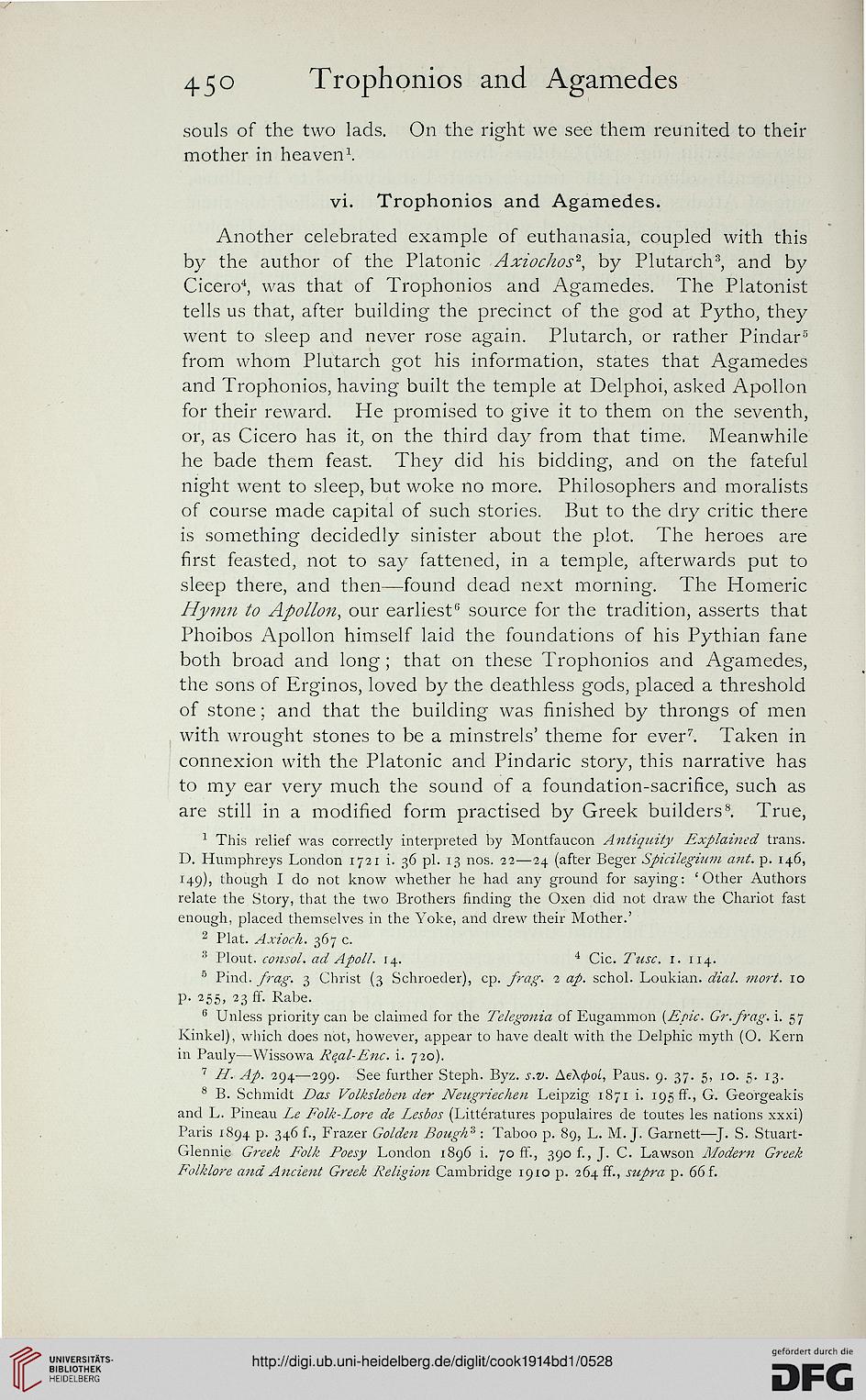 souls of the two lads. On the right we see them reunited to their
mother in heaven1.

Another celebrated example of euthanasia, coupled with this
by the author of the Platonic -Axiochos2, by Plutarch3, and by
Cicero4, was that of Trophonios and Agamedes. The Platonist
tells us that, after building the precinct of the god at Pytho, they
went to sleep and never rose again. Plutarch, or rather Pindar5
from whom Plutarch got his information, states that Agamedes
and Trophonios, having built the temple at Delphoi, asked Apollon
for their reward. He promised to give it to them on the seventh,
or, as Cicero has it, on the third day from that time. Meanwhile
he bade them feast. They did his bidding, and on the fateful
night went to sleep, but woke no more. Philosophers and moralists
of course made capital of such stories. But to the dry critic there
is something decidedly sinister about the plot. The heroes are
first feasted, not to say fattened, in a temple, afterwards put to
sleep there, and then—found dead next morning. The Homeric
Hymn to Apollon, our earliest6 source for the tradition, asserts that
Phoibos Apollon himself laid the foundations of his Pythian fane
both broad and long; that on these Trophonios and Agamedes,
the sons of Erginos, loved by the deathless gods, placed a threshold
of stone; and that the building was finished by throngs of men
with wrought stones to be a minstrels' theme for ever7. Taken in
connexion with the Platonic and Pindaric story, this narrative has
to my ear very much the sound of a foundation-sacrifice, such as
are still in a modified form practised by Greek builders8. True,

1 This relief was correctly interpreted by Montfaucon Antiquity Explained trans.
D. Humphreys London 1721 i. 36 pi. 13 nos. 22—24 (after Beger Spicilegium ant. p. 146,
149), though I do not know whether he had any ground for saying: 'Other Authors
relate the Story, that the two Brothers finding the Oxen did not draw the Chariot fast
enough, placed themselves in the Yoke, and drew their Mother.'

6 Unless priority can be claimed for the Telegonia of Eugammon (Epic. Gr.frag. i. 57
Kinkel), which does not, however, appear to have dealt with the Delphic myth (O. Kern
in Pauly—Wissowa Real-Enc. i. 720).