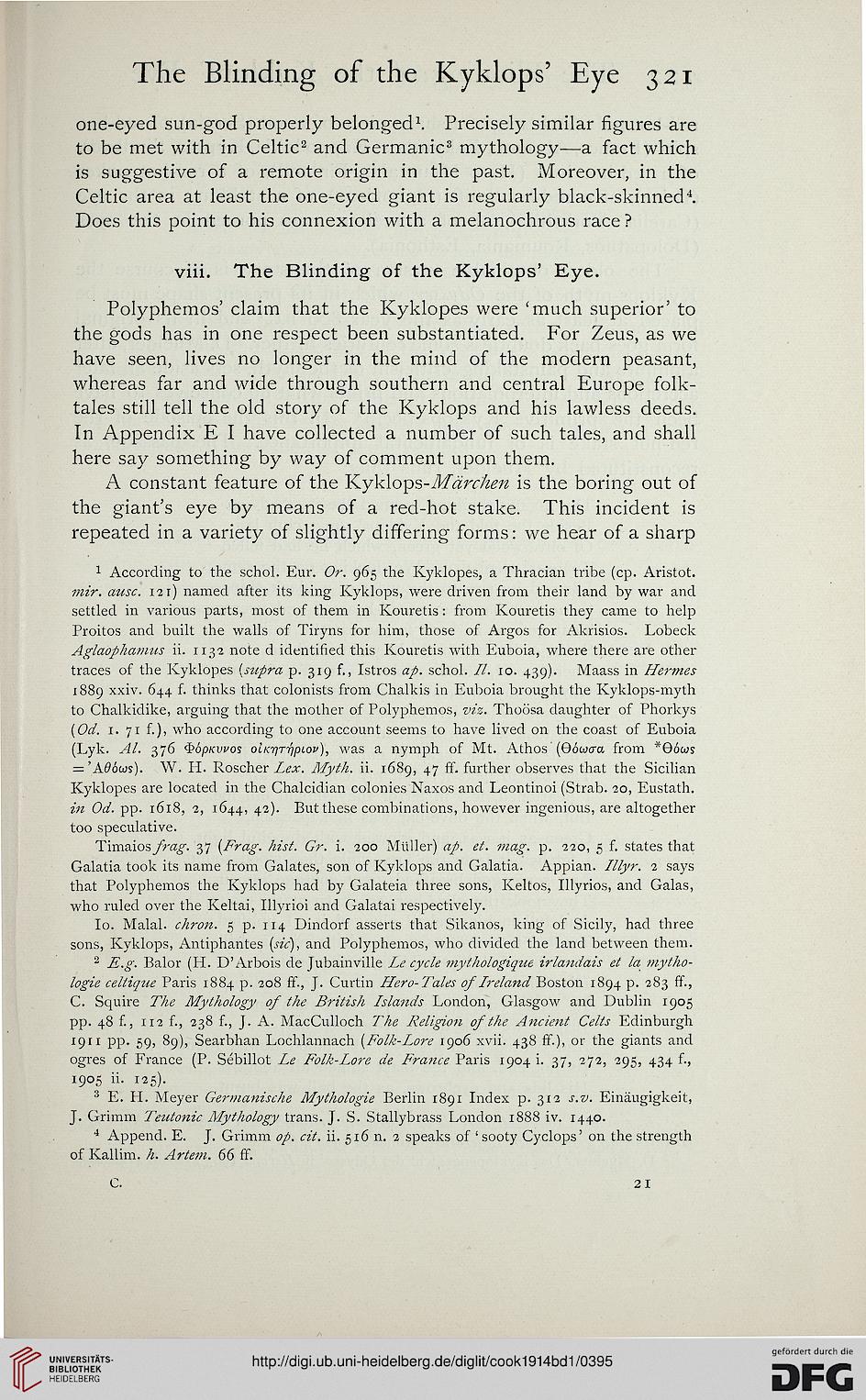 Information about OCR text
The Blinding of the Kyklops' Eye 321

one-eyed sun-god properly belonged1. Precisely similar figures are
to be met with in Celtic2 and Germanic3 mythology—a fact which
is suggestive of a remote origin in the past. Moreover, in the
Celtic area at least the one-eyed giant is regularly black-skinned4.
Does this point to his connexion with a melanochrous race ?

viii. The Blinding of the Kyklops' Eye.

Polyphemos' claim that the Kyklopes were 'much superior' to
the gods has in one respect been substantiated. For Zeus, as we
have seen, lives no longer in the mind of the modern peasant,
whereas far and wide through southern and central Europe folk-
tales still tell the old story of the Kyklops and his lawless deeds.
In Appendix E I have collected a number of such tales, and shall
here say something by way of comment upon them.

A constant feature of the Kyklops-Mdrcken is the boring out of
the giant's eye by means of a red-hot stake. This incident is
repeated in a variety of slightly differing forms: we hear of a sharp

1 According to the schol. Eur. Or. 965 the Kyklopes, a Thracian tribe (cp. Aristot.
mir. ausc. 121) named after its king Kyklops, were driven from their land by war and
settled in various parts, most of them in Kouretis: from Kouretis they came to help
Proitos and built the walls of Tiryns for him, those of Argos for Akrisios. Lobeck
Aglaophannis ii. 1132 note d identified this Kouretis with Euboia, where there are other
traces of the Kyklopes {supra p. 319 f., Istros ap. schol. //. 10. 439). Maass in Hermes
1889 xxiv. 644 f. thinks that colonists from Chalkis in Euboia brought the Kyklops-myth
to Chalkidike, arguing that the mother of Polyphemos, viz. Thoosa daughter of Phorkys
(Od. 1. 71 f.), who according to one account seems to have lived on the coast of Euboia
(Lyk. Al. 376 Qbpuvvos oiKiqTrjpLQv), was a nymph of Mt. Athos (Qbwcra from *Q6cos
= 'A#6ws). W. H. Roscher Lex. Myth. ii. 1689, 47 ff. further observes that the Sicilian
Kyklopes are located in the Chalcidian colonies Naxos and Leontinoi (Strab. 20, Eustath.
in Od. pp. 1618, 2, 1644, 42). But these combinations, however ingenious, are altogether
too speculative.

Io. Malal. chron. 5 p. 114 Dindorf asserts that Sikanos, king of Sicily, had three
sons, Kyklops, Antiphantes (sic), and Polyphemos, who divided the land between them.