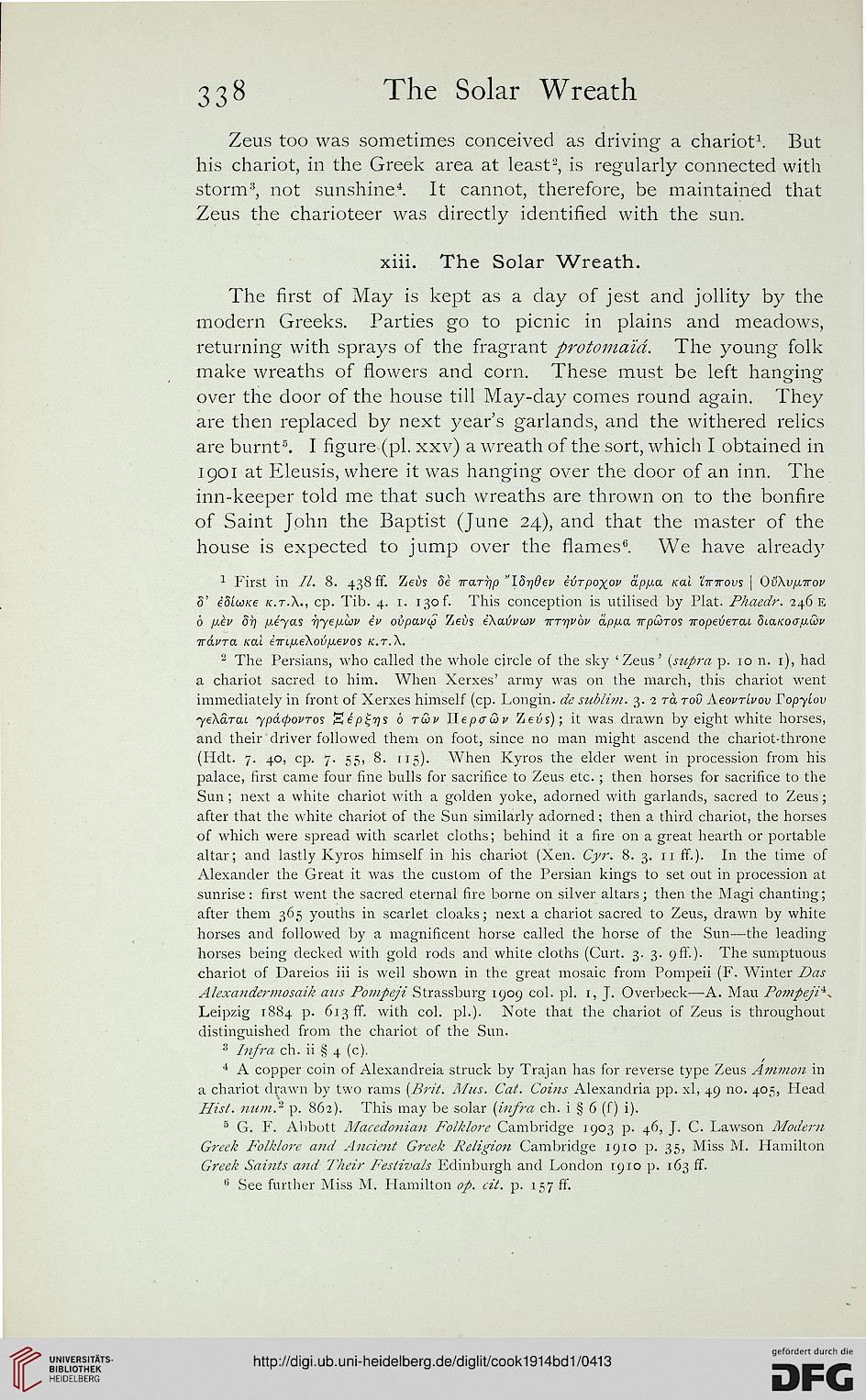 Zeus too was sometimes conceived as driving a chariot1. But
his chariot, in the Greek area at least2, is regularly connected with
storm3, not sunshine4. It cannot, therefore, be maintained that
Zeus the charioteer was directly identified with the sun.

The first of May is kept as a day of jest and jollity by the
modern Greeks. Parties go to picnic in plains and meadows,
returning with sprays of the fragrant protomaid. The young folk
make wreaths of flowers and corn. These must be left hanging
over the door of the house till May-day comes round again. They
are then replaced by next year's garlands, and the withered relics
are burnt5. I figure (pi. xxv) a wreath of the sort, which I obtained in
1901 at Eleusis, where it was hanging over the door of an inn. The
inn-keeper told me that such wreaths are thrown on to the bonfire
of Saint John the Baptist (June 24), and that the master of the
house is expected to jump over the flames6. We have already

2 The Persians, who called the whole circle of the sky 'Zeus' (supra p. 10 n. 1), had
a chariot sacred to him. When Xerxes' army was on the march, this chariot went
immediately in front of Xerxes himself (cp. Longin. de sublim. 3. 2 ret tov Aeovrivov Yopyiov
yeXaraL ypdcpovros Sfj"^s 6 t&p llepaQv Zetfs); it was drawn by eight white horses,
and their driver followed them on foot, since no man might ascend the chariot-throne
(Hdt. 7. 40, cp. 7. 55, 8. 115). When Kyros the elder went in procession from his
palace, first came four fine bulls for sacrifice to Zeus etc.; then horses for sacrifice to the
Sun ; next a white chariot with a golden yoke, adorned with garlands, sacred to Zeus;
after that the white chariot of the Sun similarly adorned; then a third chariot, the horses
of which were spread with scarlet cloths; behind it a fire on a great hearth or portable
altar; and lastly Kyros himself in his chariot (Xen. Cyr. 8. 3. 11 ff.). In the time of
Alexander the Great it was the custom of the Persian kings to set out in procession at
sunrise : first went the sacred eternal fire borne on silver altars; then the Magi chanting;
after them 365 youths in scarlet cloaks; next a chariot sacred to Zeus, drawn by white
horses and followed by a magnificent horse called the horse of the Sun—the leading
horses being decked with gold rods and white cloths (Curt. 3. 3. 9fT.). The sumptuous
chariot of Dareios iii is well shown in the great mosaic from Pompeii (F. Winter Das
Alexandermosaik aits Pompeji Strassburg 1909 col. pi. 1, J. Overbeck—-A. Mau Pompeji*^
Leipzig 1884 p. 613 ff. with col. pi.). Note that the chariot of Zeus is throughout
distinguished from the chariot of the Sun.