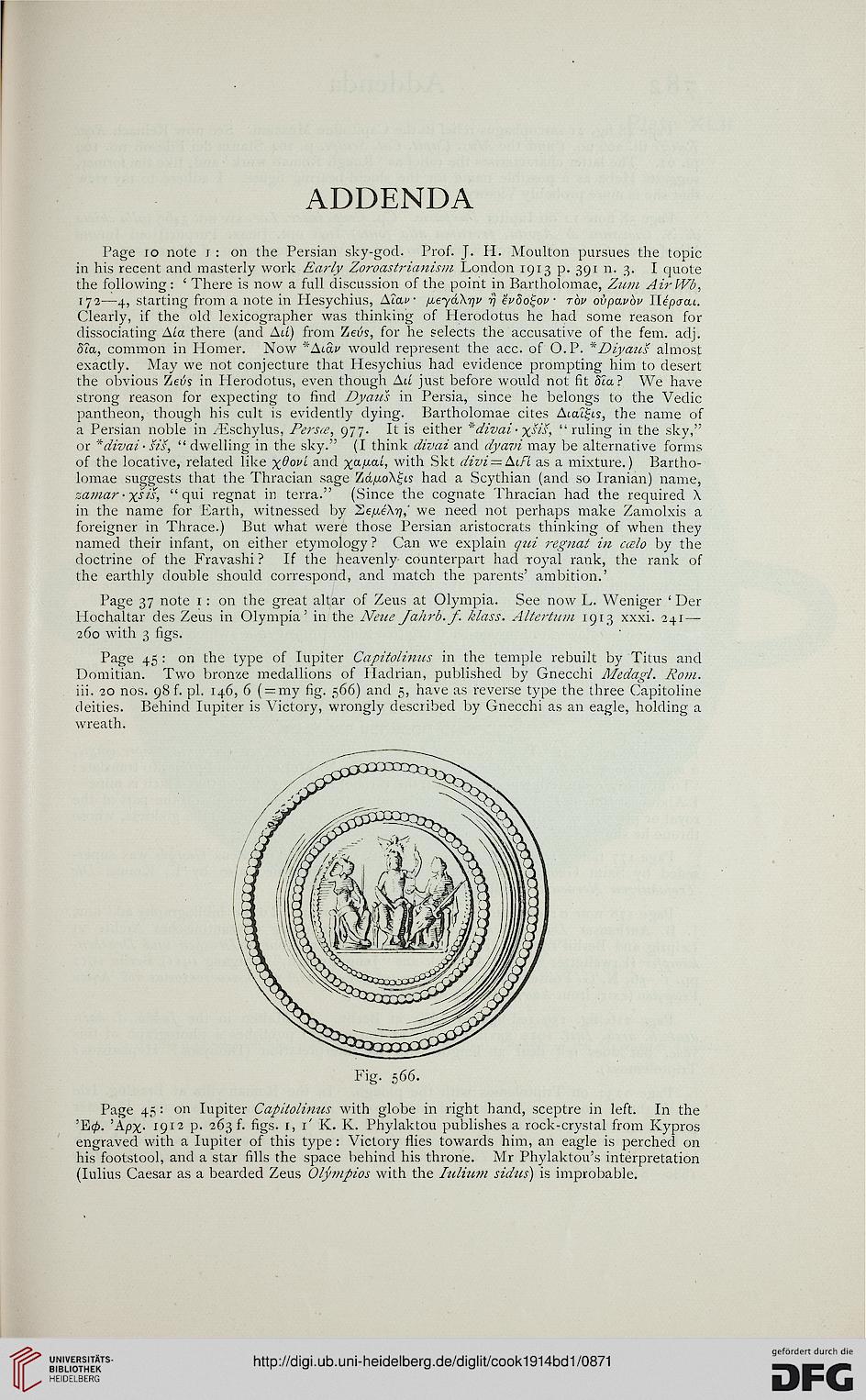 Page ro note i : on the Persian sky-god. Prof. J. H. Moulton pursues the topic
in his recent and masterly work Early Zoroastrianisin London 1913 p. 391 n. 3. I quote
the following : ' There is now a full discussion of the point in Bartholomae, Zum AirWb,
172—4, starting from a note in Hesychius, Aiae • jmeydXrju 77 evdo^ov top ovpavbv Hepaai.
Clearly, if the old lexicographer was thinking of Herodotus he had some reason for
dissociating Aia there (and Au') from Zetfs, for he selects the accusative of the fem. adj.
52a, common in Homer. Now *Ai£i' would represent the acc. of O.P. *Diyatis almost
exactly. May we not conjecture that Hesychius had evidence prompting him to desert
the obvious Zetfs in Herodotus, even though Au just before would not fit <5ta? We have
strong reason for expecting to find Dyaiis in Persia, since he belongs to the Vedic
pantheon, though his cult is evidently dying. Bartholomae cites Aicu£ts, the name of
a Persian noble in /Fschylus, Persce, 977. It is either *divai-x$is, "ruling in the sky,"
or *divai • sis, " dwelling in the sky." (I think divai and dyavi may be alternative forms
of the locative, related like x®0Vi anci xa/mt, with Skt divi — At/t as a mixture.) Bartho-
lomae suggests that the Thracian sage ZctftoX^ts had a Scythian (and so Iranian) name,
zamar• xsis, "qui regnat in terra." (Since the cognate Thracian had the required X
in the name for Earth, witnessed by SefteA^,' we need not perhaps make Zamolxis a
foreigner in Thrace.) But what were those Persian aristocrats thinking of when they
named their infant, on either etymology ? Can we explain qui regnat in ccslo by the
doctrine of the Fravashi ? If the heavenly counterpart had royal rank, the rank of
the earthly double should correspond, and match the parents' ambition.'

Page 45 : on the type of Iupiter Capitolinus in the temple rebuilt by Titus and
Domitian. Two bronze medallions of Hadrian, published by Gnecchi Medagl. Rotn.
iii. 20 nos. 98 f. pi. 146, 6 ( = my fig. 566) and 5, have as reverse type the three Capitoline
deities. Behind Iupiter is Victory, wrongly described by Gnecchi as an eagle, holding a
wreath.

Page 45: on Iupiter Capitolinus with globe in right hand, sceptre in left. In the
'E0. 'Apx- 1912 P- 263 f. figs. 1, 1' K. K. Phylaktou publishes a rock-crystal from Kypros
engraved with a Iupiter of this type: Victory flies towards him, an eagle is perched on
his footstool, and a star fills the space behind his throne. Mr Phylaktou's interpretation
(Iulius Caesar as a bearded Zeus Olympios with the Iulium sidus) is improbable.