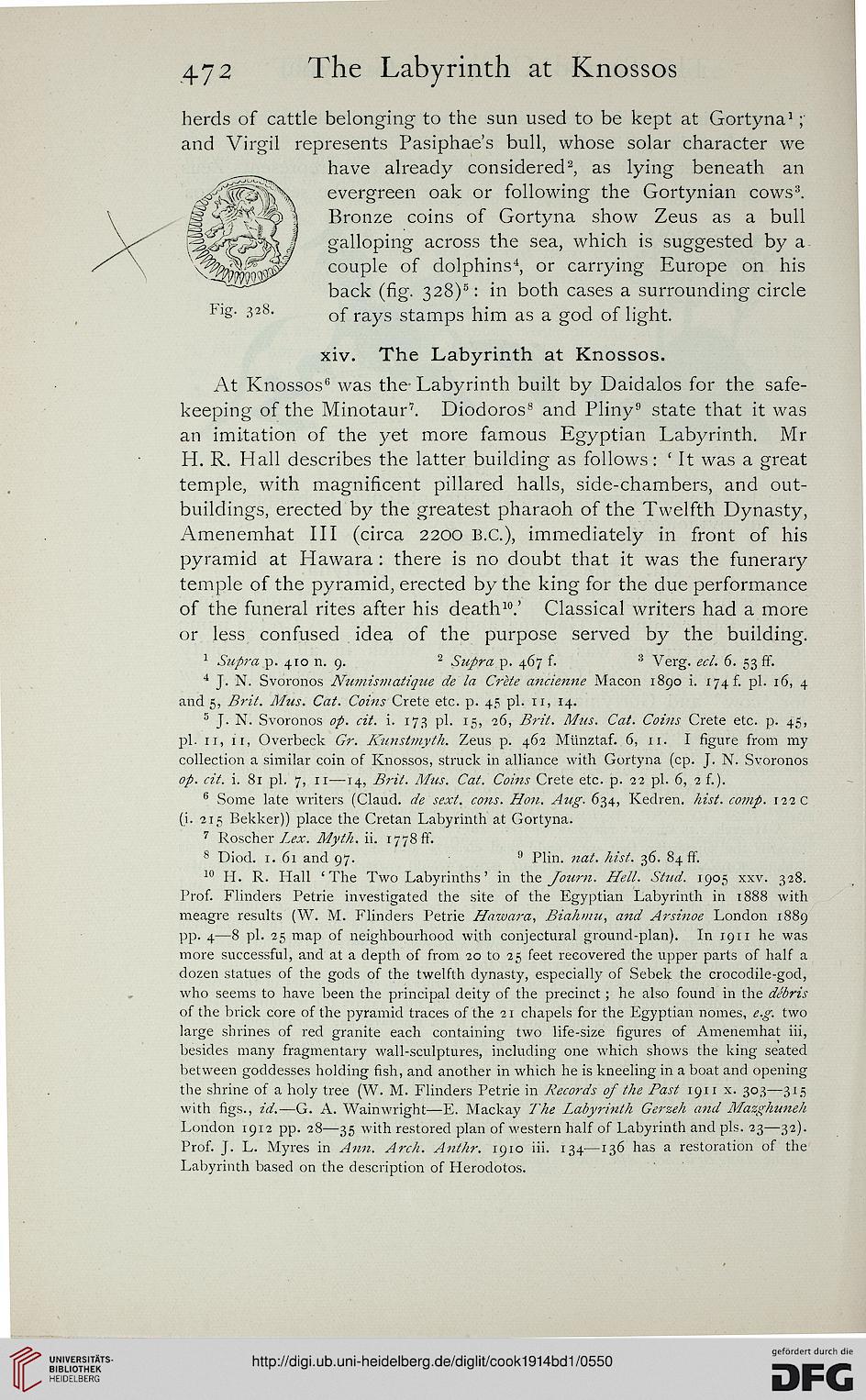 The Labyrinth at Knossos

herds of cattle belonging to the sun used to be kept at Gortyna1;
and Virgil represents Pasiphae's bull, whose solar character we

have already considered2, as lying beneath an
evergreen oak or following the Gortynian cows3.
Bronze coins of Gortyna show Zeus as a bull
galloping across the sea, which is suggested by a
couple of dolphins4, or carrying Europe on his
back (fig. 328)5: in both cases a surrounding circle
**g- 32^- of rays stamps him as a god of light.

xiv. The Labyrinth at Knossos.

At Knossos6 was the Labyrinth built by Daidalos for the safe-
keeping of the Minotaur7. Diodoros8 and Pliny9 state that it was
an imitation of the yet more famous Egyptian Labyrinth. Mr
H. R. Hall describes the latter building as follows: ' It was a great
temple, with magnificent pillared halls, side-chambers, and out-
buildings, erected by the greatest pharaoh of the Twelfth Dynasty,
Amenemhat III (circa 2200 B.C.), immediately in front of his
pyramid at Hawara: there is no doubt that it was the funerary
temple of the pyramid, erected by the king for the due performance
of the funeral rites after his death10.' Classical writers had a more
or less confused idea of the purpose served by the building.

10 H. R. Hall 'The Two Labyrinths' in the Journ. Hell. Stud. 1905 xxv. 328.
Prof. Flinders Petrie investigated the site of the Egyptian Labyrinth in 1888 with
meagre results (W. M. Flinders Petrie Hawara, Biahmu, and Arsinoe London 1889
pp. 4—8 pi. 25 map of neighbourhood with conjectural ground-plan). In 1911 he was
more successful, and at a depth of from 20 to 25 feet recovered the upper parts of half a
dozen statues of the gods of the twelfth dynasty, especially of Sebek the crocodile-god,
who seems to have been the principal deity of the precinct; he also found in the debris
of the brick core of the pyramid traces of the 21 chapels for the Egyptian nomes, e.g. two
large shrines of red granite each containing two life-size figures of Amenemhat hi,
besides many fragmentary wall-sculptures, including one which shows the king seated
between goddesses holding fish, and another in which he is kneeling in a boat and opening
the shrine of a holy tree (W. M. Flinders Petrie in Records of the Past 1911 x. 303—315
with figs., id.—G. A. Wainwright—E. Mackay The Labyrinth Gerzeh and Mazghuneh
London 1912 pp. 28—35 with restored plan of western half of Labyrinth and pis. 23—32).
Prof. J. L. Myres in Ann. Arch. Anthr. 1910 iii. 134—136 has a restoration of the
Labyrinth based on the description of Herodotos.