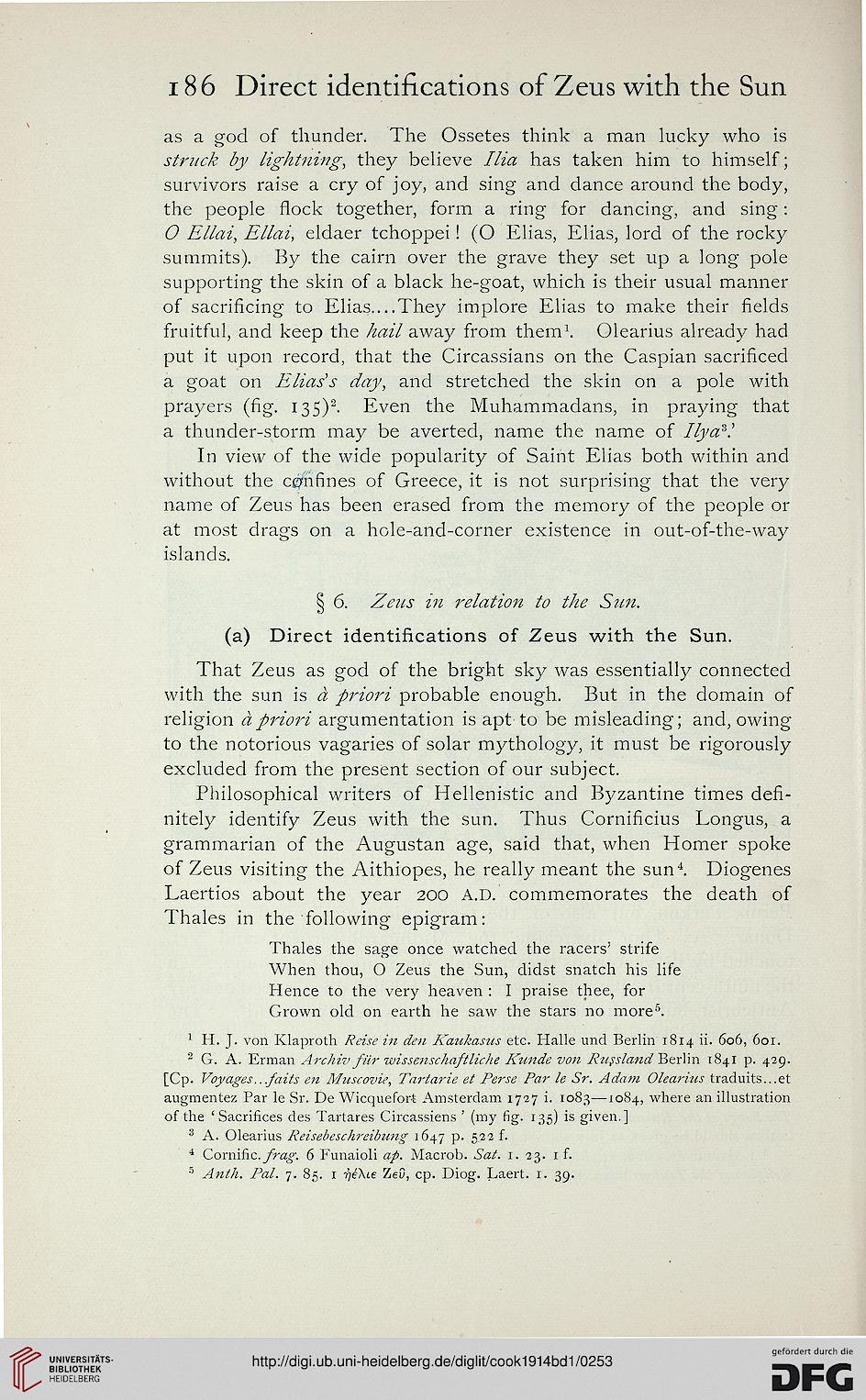 as a god of thunder. The Ossetes think a man lucky who is
struck by lightning, they believe Ilia has taken him to himself;
survivors raise a cry of joy, and sing and dance around the body,
the people flock together, form a ring for dancing, and sing:
0 Ellai, Ellai, eldaer tchoppei! (0 Elias, Elias, lord of the rocky
summits). By the cairn over the grave they set up a long pole
supporting the skin of a black he-goat, which is their usual manner
of sacrificing to Elias....They implore Elias to make their fields
fruitful, and keep the hail away from them1. Olearius already had
put it upon record, that the Circassians on the Caspian sacrificed
a goat on Elias's day, and stretched the skin on a pole with
prayers (fig. 135)2. Even the Muhammadans, in praying that
a thunder-storm may be averted, name the name of Ilya3.'

In view of the wide popularity of Saint Elias both within and
without the confines of Greece, it is not surprising that the very
name of Zeus has been erased from the memory of the people or
at most drags on a hole-and-corner existence in out-of-the-way
islands.

§ 6. Zeus in relation to the Sun.
(a) Direct identifications of Zeus with the Sun.

That Zeus as god of the bright sky was essentially connected
with the sun is a priori probable enough. But in the domain of
religion a priori argumentation is apt to be misleading; and, owing
to the notorious vagaries of solar mythology, it must be rigorously
excluded from the present section of our subject.

Philosophical writers of Hellenistic and Byzantine times defi-
nitely identify Zeus with the sun. Thus Cornificius Longus, a
grammarian of the Augustan age, said that, when Homer spoke
of Zeus visiting the Aithiopes, he really meant the sun4. Diogenes
Laertios about the year 200 A.D. commemorates the death of
Thales in the following epigram:

Thales the sage once watched the racers' strife
When thou, O Zeus the Sun, didst snatch his life
Hence to the very heaven : I praise thee, for
Grown old on earth he saw the stars no more5.