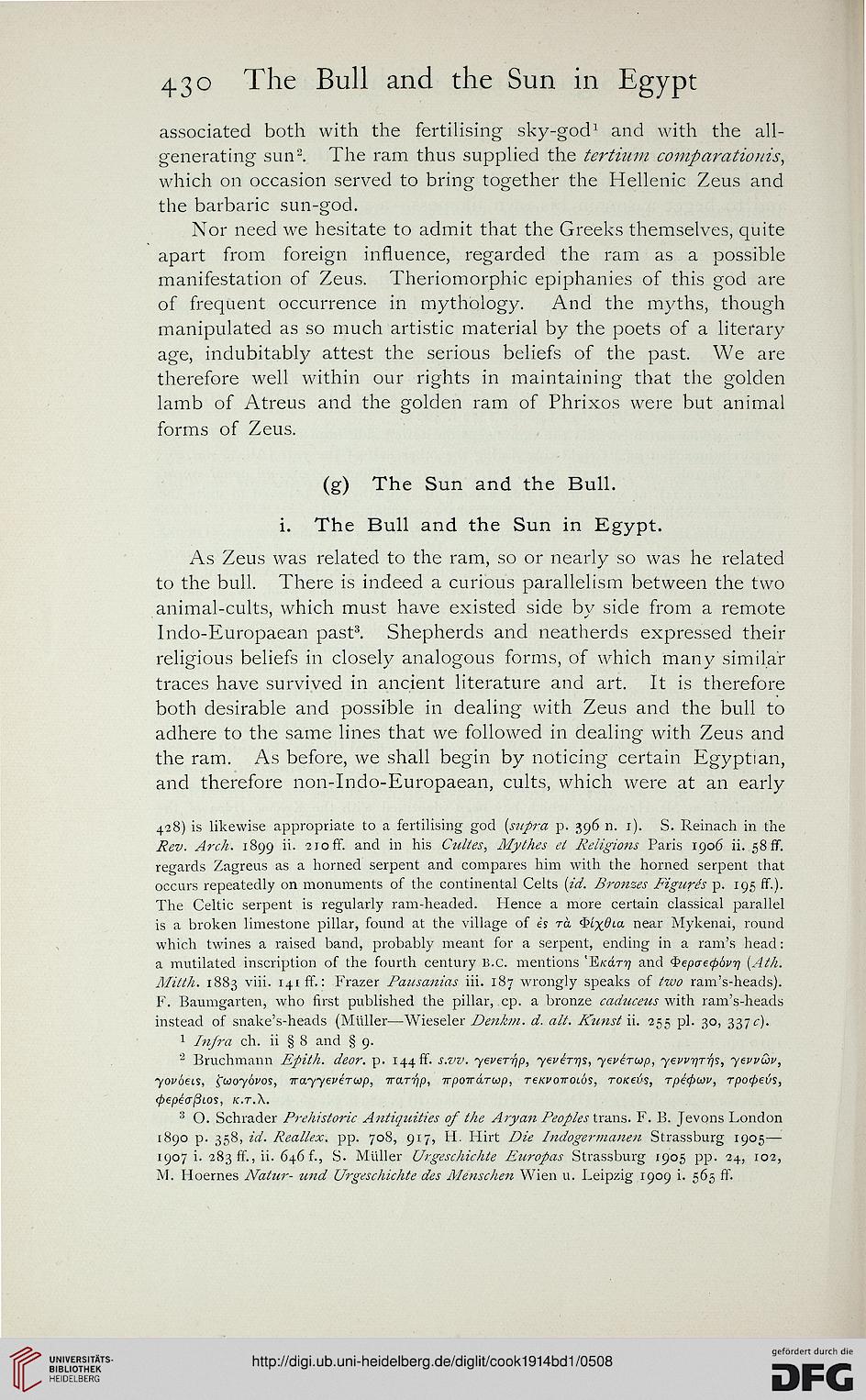 associated both with the fertilising sky-god1 and with the all-
generating sun2. The ram thus supplied the tertium comparatioms,
which on occasion served to bring together the Hellenic Zeus and
the barbaric sun-god.

Nor need we hesitate to admit that the Greeks themselves, quite
apart from foreign influence, regarded the ram as a possible
manifestation of Zeus. Theriomorphic epiphanies of this god are
of frequent occurrence in mythology. And the myths, though
manipulated as so much artistic material by the poets of a literary
age, indubitably attest the serious beliefs of the past. We are
therefore well within our rights in maintaining that the golden
lamb of Atreus and the golden ram of Phrixos were but animal
forms of Zeus.

i. The Bull and the Sun in Egypt.

As Zeus was related to the ram, so or nearly so was he related
to the bull. There is indeed a curious parallelism between the two
animal-cults, which must have existed side by side from a remote
Indo-Europaean past3. Shepherds and neatherds expressed their
religious beliefs in closely analogous forms, of which many similar
traces have survived in ancient literature and art. It is therefore
both desirable and possible in dealing with Zeus and the bull to
adhere to the same lines that we followed in dealing with Zeus and
the ram. As before, we shall begin by noticing certain Egyptian,
and therefore non-Indo-Europaean, cults, which were at an early

428) is likewise appropriate to a fertilising god [supra p. 396 n. 1). S. Reinach in the
Rev. Arch. 1899 ii. 210 ff. and in his Cultes, Mythes et Religions Paris 1906 ii. 58 ff.
regards Zagreus as a horned serpent and compares him with the horned serpent that
occurs repeatedly on monuments of the continental Celts [id. Bronzes Figure's p. 195 ff.).
The Celtic serpent is regularly ram-headed. Hence a more certain classical parallel
is a broken limestone pillar, found at the village of is ra $i'x#ia near Mykenai, round
which twines a raised band, probably meant for a serpent, ending in a ram's head:
a mutilated inscription of the fourth century B.C. mentions ''Ek&tt) and Qepcrecpovq (Ath.
Mitth. 1883 viii. 141 ff.: Frazer Pausanias iii. 187 wrongly speaks of two ram's-heads).
F. Baumgarten, who first published the pillar, cp. a bronze caduceus with ram's-heads
instead of snake's-heads (Muller—Wieseler Denkm. d. alt. Kunst ii. 255 pi. 30, 337 c).