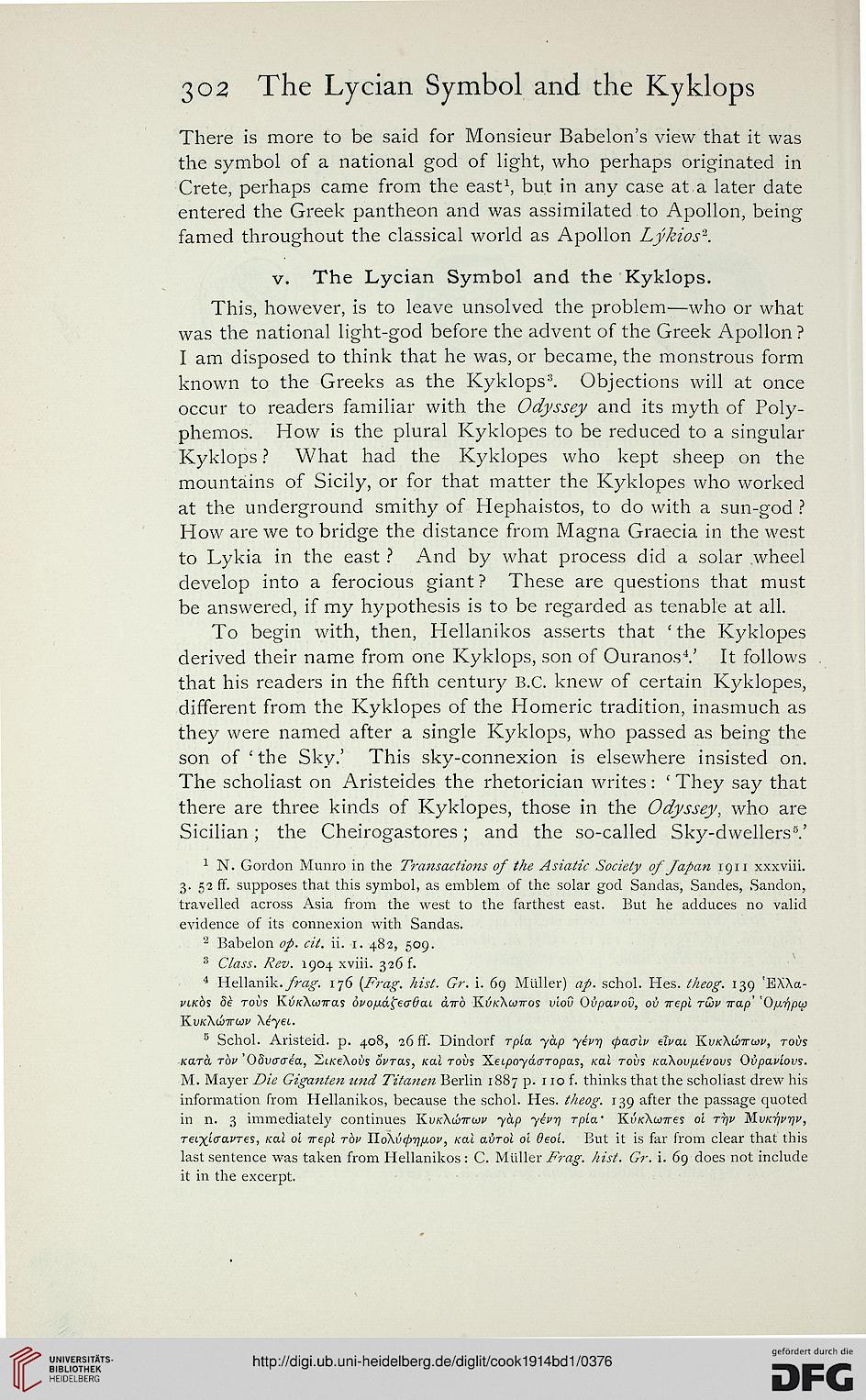 Information about OCR text
302 The Lycian Symbol and the Kyklops

There is more to be said for Monsieur Babelon's view that it was
the symbol of a national god of light, who perhaps originated in
Crete, perhaps came from the east1, but in any case at a later date
entered the Greek pantheon and was assimilated to Apollon, being
famed throughout the classical world as Apollon Lykios'2.

v. The Lycian Symbol and the Kyklops.

This, however, is to leave unsolved the problem—who or what
was the national light-god before the advent of the Greek Apollon ?
I am disposed to think that he was, or became, the monstrous form
known to the Greeks as the Kyklops3. Objections will at once
occur to readers familiar with the Odyssey and its myth of Poly-
phemos. How is the plural Kyklopes to be reduced to a singular
Kyklops ? What had the Kyklopes who kept sheep on the
mountains of Sicily, or for that matter the Kyklopes who worked
at the underground smithy of Hephaistos, to do with a sun-god ?
How are we to bridge the distance from Magna Graecia in the west
to Lykia in the east ? And by what process did a solar wheel
develop into a ferocious giant? These are questions that must
be answered, if my hypothesis is to be regarded as tenable at all.

To begin with, then, Hellanikos asserts that 1 the Kyklopes
derived their name from one Kyklops, son of OuranosV It follows
that his readers in the fifth century B.C. knew of certain Kyklopes,
different from the Kyklopes of the Homeric tradition, inasmuch as
they were named after a single Kyklops, who passed as being the
son of 'the Sky.' This sky-connexion is elsewhere insisted on.
The scholiast on Aristeides the rhetorician writes: ' They say that
there are three kinds of Kyklopes, those in the Odyssey, who are
Sicilian; the Cheirogastores; and the so-called Sky-dwellers5.'

1 N. Gordon Munro in the Transactions of the Asiatic Society of Japan 1911 xxxviii.
3. 52 ff. supposes that this symbol, as emblem of the solar god Sandas, Sandes, Sandon,
travelled across Asia from the west to the farthest east. But he adduces no valid
evidence of its connexion with Sandas.