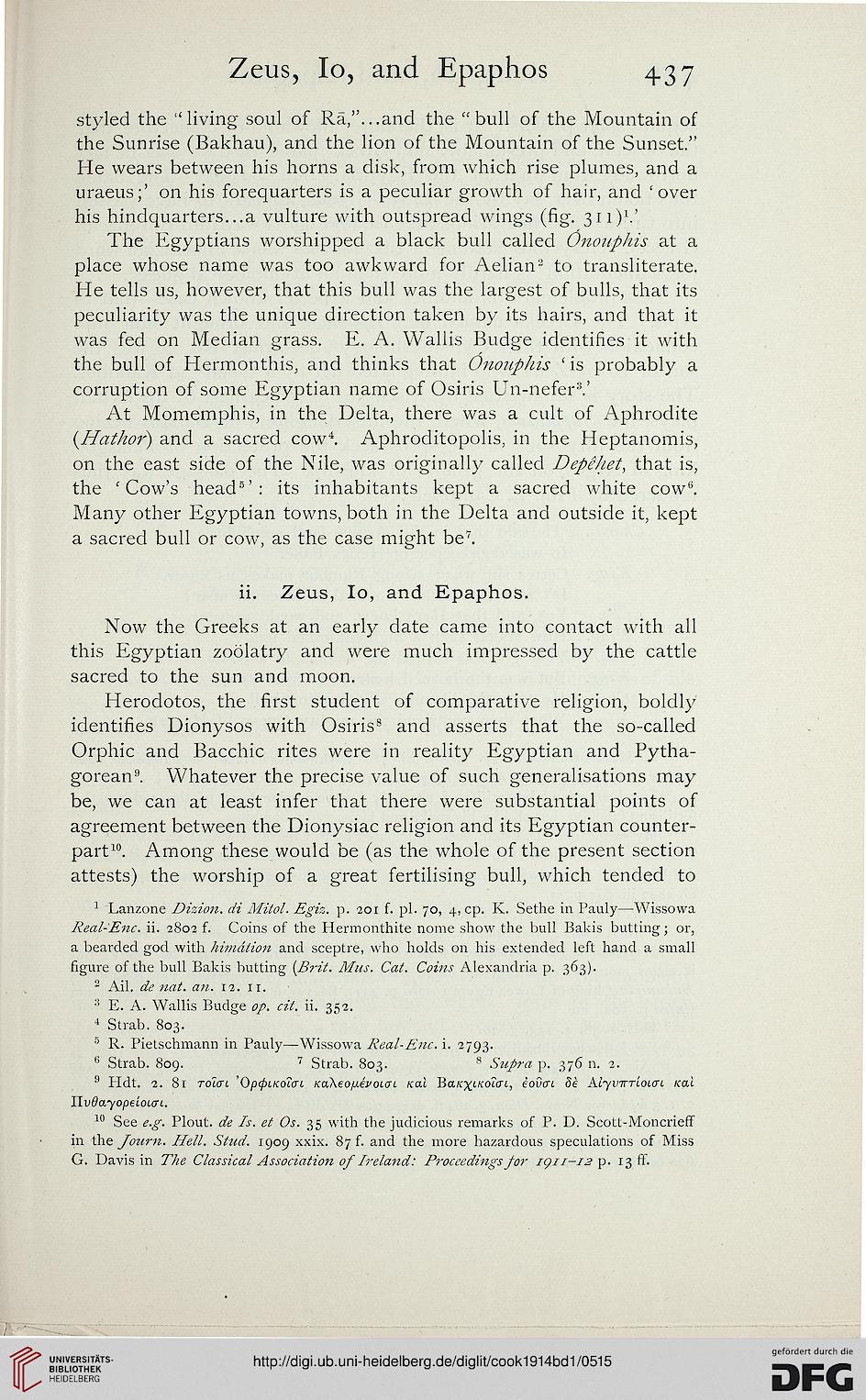 styled the "living soul of Ra,"...and the "bull of the Mountain of
the Sunrise (Bakhau), and the lion of the Mountain of the Sunset."
He wears between his horns a disk, from which rise plumes, and a
uraeus;' on his forequarters is a peculiar growth of hair, and 'over
his hindquarters...a vulture with outspread wings (fig. 311)1.'

The Egyptians worshipped a black bull called Ononphis at a
place whose name was too awkward for Aelian2 to transliterate.
He tells us, however, that this bull was the largest of bulls, that its
peculiarity was the unique direction taken by its hairs, and that it
was fed on Median grass. E. A. Wallis Budge identifies it with
the bull of Hermonthis, and thinks that Onoupkis ' is probably a
corruption of some Egyptian name of Osiris Un-nefer3.'

At Momemphis, in the Delta, there was a cult of Aphrodite
(Hatkor) and a sacred cow4. Aphroditopolis, in the Heptanomis,
on the east side of the Nile, was originally called Depeket, that is,
the c Cow's head5': its inhabitants kept a sacred white cow6.
Many other Egyptian towns, both in the Delta and outside it, kept
a sacred bull or cow, as the case might be7.

Now the Greeks at an early date came into contact with all
this Egyptian zoolatry and were much impressed by the cattle
sacred to the sun and moon.

Herodotos, the first student of comparative religion, boldly
identifies Dionysos with Osiris8 and asserts that the so-called
Orphic and Bacchic rites were in reality Egyptian and Pytha-
gorean9. Whatever the precise value of such generalisations may
be, we can at least infer that there were substantial points of
agreement between the Dionysiac religion and its Egyptian counter-
part10. Among these would be (as the whole of the present section
attests) the worship of a great fertilising bull, which tended to