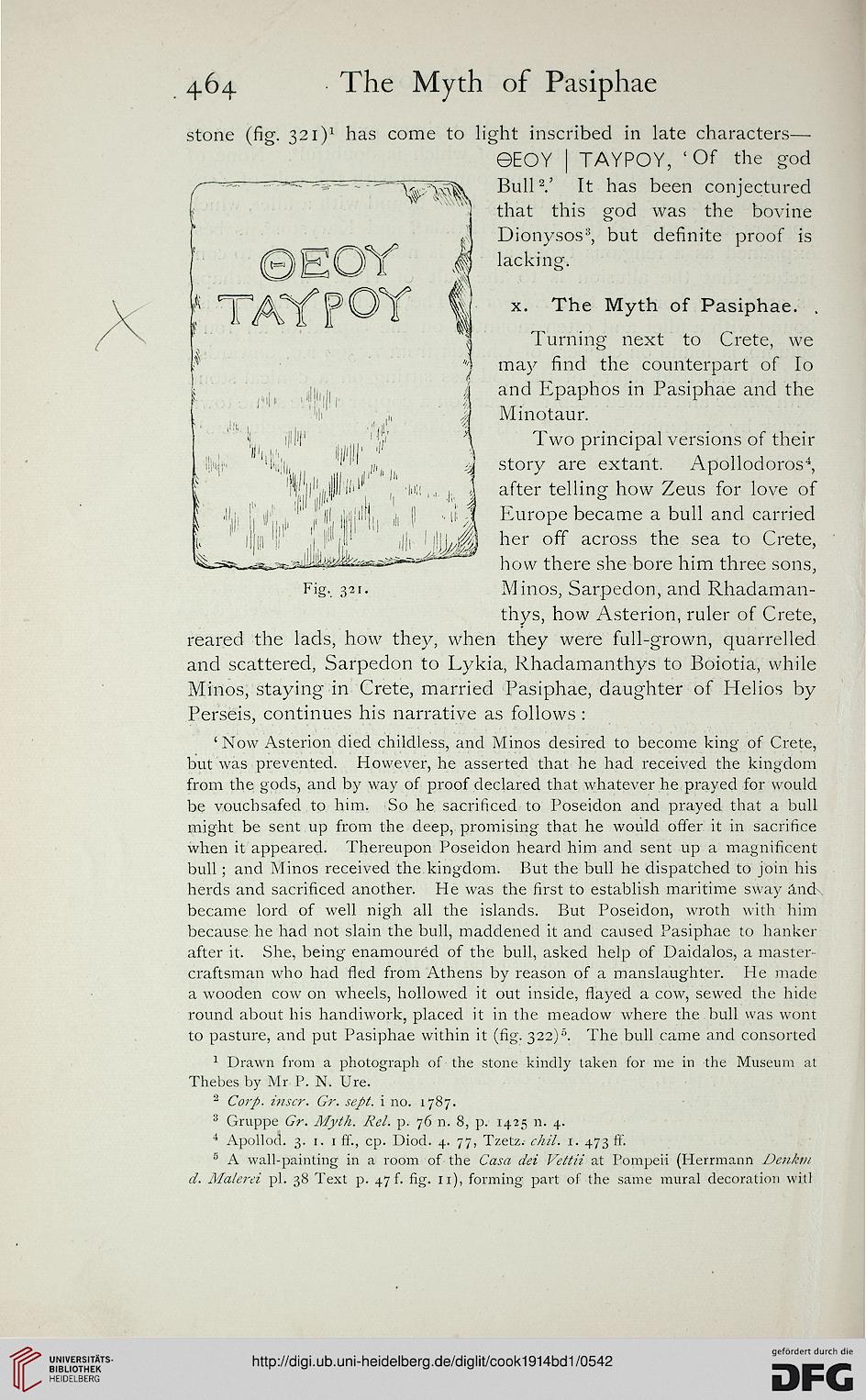 Information about OCR text
464 The Myth of Pasiphae

stone (fig. 321)1 has come to light inscribed in late characters—

0EOY I TAYPOY, 'Of the god
BullIt has been conjectured
that this god was the bovine
Dionysos3, but definite proof is
lacking.

Turning next to Crete, we
may find the counterpart of Io
and Epaphos in Pasiphae and the
Minotaur.

Two principal versions of their
story are extant. Apollodoros4,
after telling how Zeus for love of
Europe became a bull and carried
her off across the sea to Crete,
how there she bore him three sons,
Minos, Sarpedon, and Rhadaman-
thys, how Asterion, ruler of Crete,
reared the lads, how they, when they were full-grown, quarrelled
and scattered, Sarpedon to Lykia, Rhadamanthys to Boiotia, while
Minos, staying in Crete, married Pasiphae, daughter of Helios by
Perseis, continues his narrative as follows :

' Now Asterion died childless, and Minos desired to become king of Crete,
but was prevented. However, he asserted that he had received the kingdom
from the gods, and by way of proof declared that whatever he prayed for would
be vouchsafed to him. So he sacrificed to Poseidon and prayed that a bull
might be sent up from the deep, promising that he would offer it in sacrifice
when it appeared. Thereupon Poseidon heard him and sent up a magnificent
bull; and Minos received the kingdom. But the bull he dispatched to join his
herds and sacrificed another. He was the first to establish maritime sway and\
became lord of well nigh all the islands. But Poseidon, wroth with him
because he had not slain the bull, maddened it and caused Pasiphae to hanker
after it. She, being enamoured of the bull, asked help of Daidalos, a master-
craftsman who had fled from Athens by reason of a manslaughter. He made
a wooden cow on wheels, hollowed it out inside, flayed a cow, sewed the hide
round about his handiwork, placed it in the meadow where the bull was wont
to pasture, and put Pasiphae within it (fig. 322)6. The bull came and consorted

1 Drawn from a photograph of the stone kindly taken for me in the Museum at
Thebes by Mr P. N. Ure.