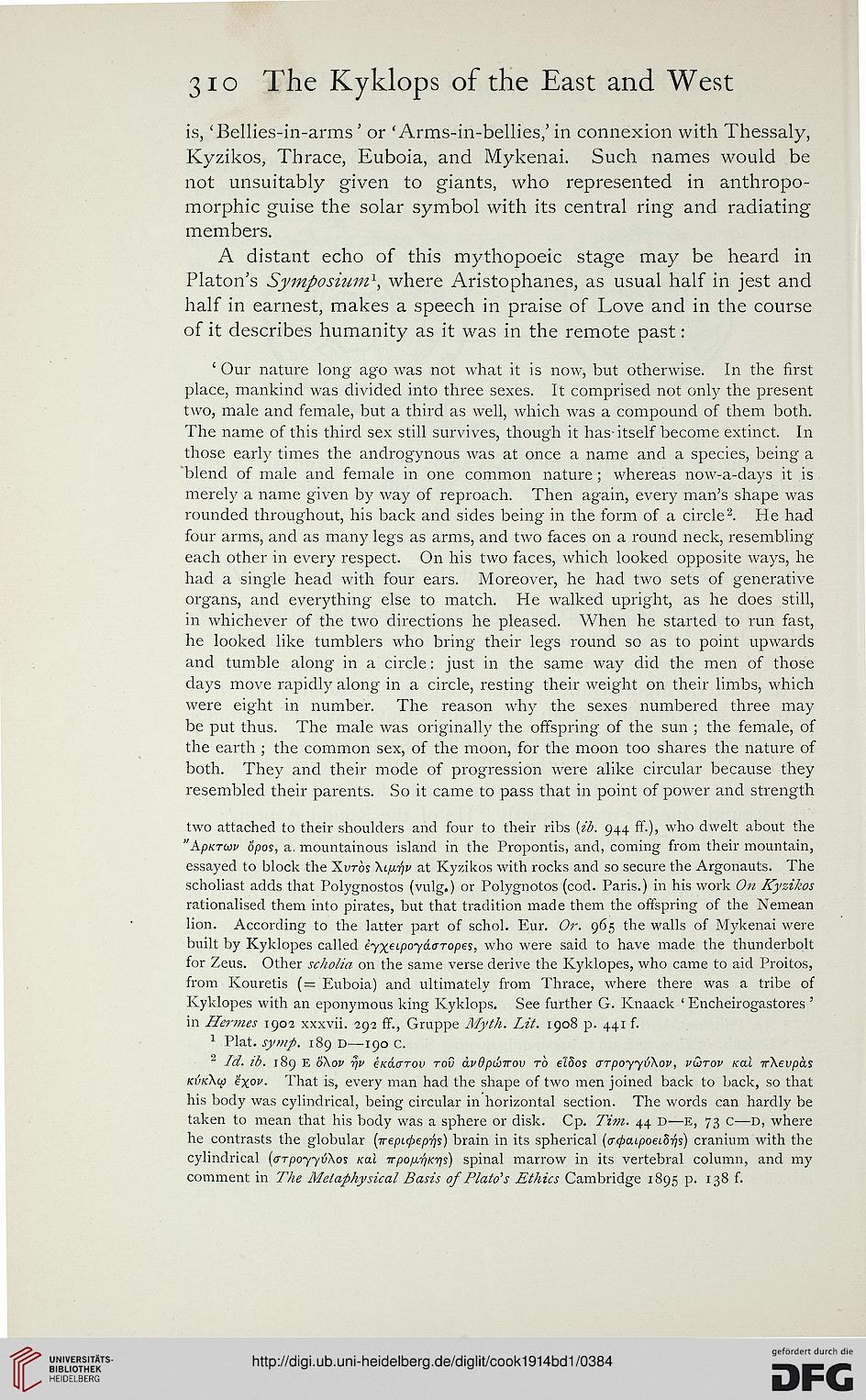 is, 'Bellies-in-arms ' or ' Arms-in-bellies,' in connexion with Thessaly,
Kyzikos, Thrace, Euboia, and Mykenai. Such names would be
not unsuitably given to giants, who represented in anthropo-
morphic guise the solar symbol with its central ring and radiating
members.

A distant echo of this mythopoeic stage may be heard in
Platon's Symposium1^ where Aristophanes, as usual half in jest and
half in earnest, makes a speech in praise of Love and in the course
of it describes humanity as it was in the remote past:

' Our nature long ago was not what it is now, but otherwise. In the first
place, mankind was divided into three sexes. It comprised not only the present
two, male and female, but a third as well, which was a compound of them both.
The name of this third sex still survives, though it has-itself become extinct. In
those early times the androgynous was at once a name and a species, being a
blend of male and female in one common nature ; whereas now-a-days it is
merely a name given by way of reproach. Then again, every man's shape was
rounded throughout, his back and sides being in the form of a circle2. He had
four arms, and as many legs as arms, and two faces on a round neck, resembling
each other in every respect. On his two faces, which looked opposite ways, he
had a single head with four ears. Moreover, he had two sets of generative
organs, and everything else to match. He walked upright, as he does still,
in whichever of the two directions he pleased. When he started to run fast,
he looked like tumblers who bring their legs round so as to point upwards
and tumble along in a circle: just in the same way did the men of those
days move rapidly along in a circle, resting their weig'ht on their limbs, which
were eight in number. The reason why the sexes numbered three may
be put thus. The male was originally the offspring of the sun ; the female, of
the earth ; the common sex, of the moon, for the moon too shares the nature of
both. They and their mode of progression were alike circular because they
resembled their parents. So it came to pass that in point of power and strength

two attached to their shoulders and four to their ribs {ib. 944 ff.), who dwelt about the
"kpnTiav 8pos, a. mountainous island in the Propontis, and, coming from their mountain,
essayed to block the Xvrbs Xifx-rju at Kyzikos with rocks and so secure the Argonauts. The
scholiast adds that Polygnostos (vulg.) or Polygnotos (cod. Paris.) in his work On Kyzikos
rationalised them into pirates, but that tradition made them the offspring of the Nemean
lion. According to the latter part of schol. Eur. Or. 965 the walls of Mykenai were
built by Kyklopes called kyxeipoyda-ropes, who were said to have made the thunderbolt
for Zeus. Other scholia on the same verse derive the Kyklopes, who came to aid Proitos,
from Kouretis (= Euboia) and ultimately from Thrace, where there was a tribe of
Kyklopes with an eponymous king Kyklops. See further G. Knaack ' Encheirogastores '
in Hermes 1902 xxxvii. 292 ff., Gruppe Myth. Lit. 1908 p. 441 f.

2 Id. ib. 189 E oXov 7)v eK&arov rod avdpwirov to eWos crrpoyyvXov, vQstov koX irXevpas
k6k\ip £x°v- That is, every man had the shape of two men joined back to back, so that
his body was cylindrical, being circular in horizontal section. The words can hardly be
taken to mean that his body was a sphere or disk. Cp. Tim. 44 D—E, 73 c—D, where
he contrasts the globular {irepupep-qs) brain in its spherical (acpaipoeL^-q's) cranium with the
cylindrical (arpoyyvXos /cat Trpo/xrjK7]s) spinal marrow in its vertebral column, and my
comment in The Metaphysical Basis of Plato's Ethics Cambridge 1895 p. 138 f.