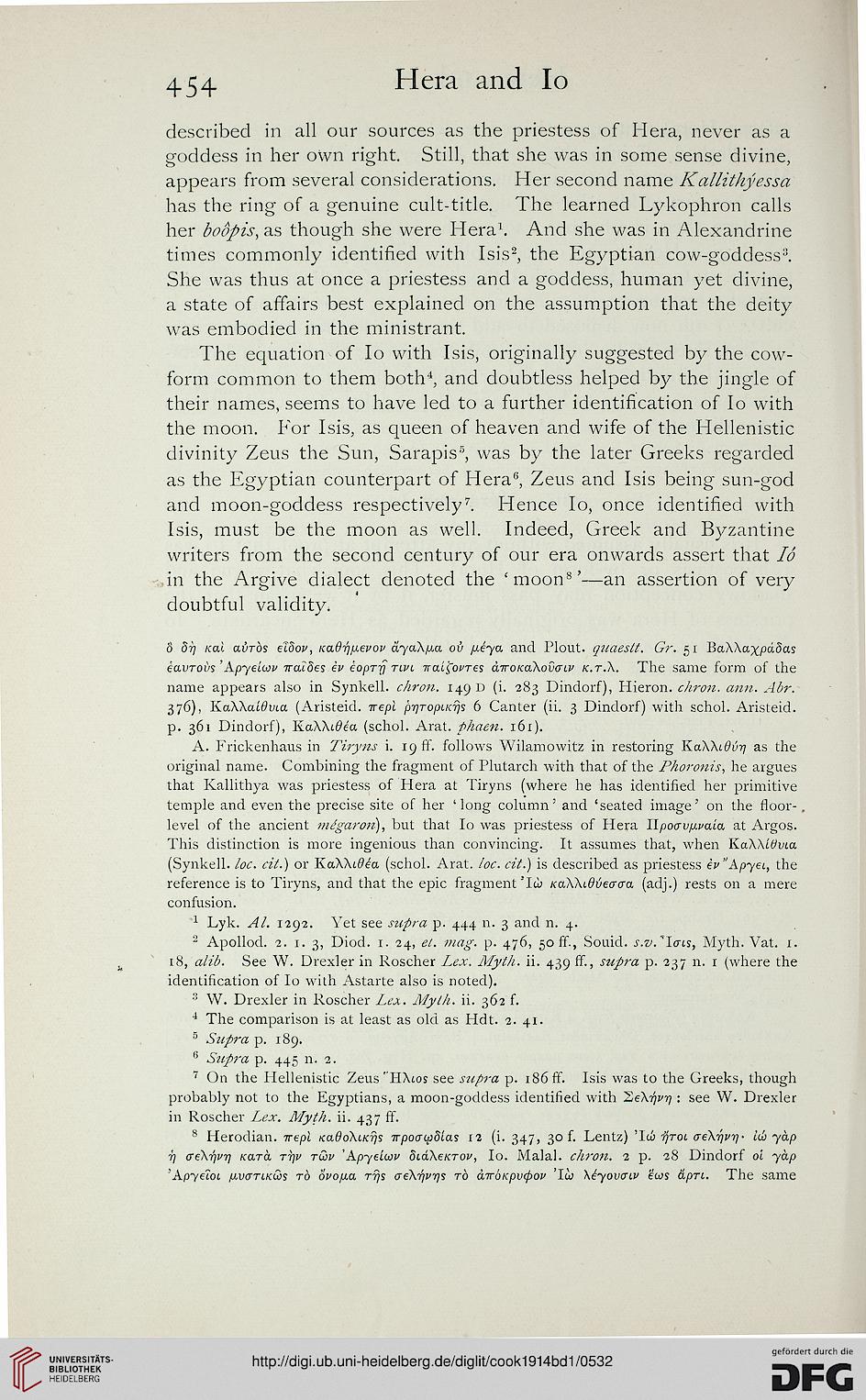 described in all our sources as the priestess of Hera, never as a
goddess in her own right. Still, that she was in some sense divine,
appears from several considerations. Her second name Kallithyessa
has the ring of a genuine cult-title. The learned Lykophron calls
her boopis, as though she were Hera1. And she was in Alexandrine
times commonly identified with Isis2, the Egyptian cow-goddess3.
She was thus at once a priestess and a goddess, human yet divine,
a state of affairs best explained on the assumption that the deity
was embodied in the ministrant.

The equation of Io with Isis, originally suggested by the cow-
form common to them both4, and doubtless helped by the jingle of
their names, seems to have led to a further identification of Io with
the moon. For Isis, as queen of heaven and wife of the Hellenistic
divinity Zeus the Sun, Sarapis5, was by the later Greeks regarded
as the Egyptian counterpart of Hera6, Zeus and Isis being sun-god
and moon-goddess respectively7. Hence Io, once identified with
Isis, must be the moon as well. Indeed, Greek and Byzantine
writers from the second century of our era onwards assert that 16
in the Argive dialect denoted the 'moon8'—an assertion of very
doubtful validity.

A. Frickenhaus in Tiryns i. 19 ff. follows Wilamowitz in restoring KaXXidvr) as the
original name. Combining the fragment of Plutarch with that of the Phoronis, he argues
that Kallithya was priestess of Hera at Tiryns (where he has identified her primitive
temple and even the precise site of her 'long column' and 'seated image' on the floor- ,
level of the ancient me'garon), but that Io was priestess of Hera UpoavpLvaia at Argos.
This distinction is more ingenious than convincing. It assumes that, when KaXXLOvLa
(Synkell. loc. cit.) or KaXXtdia (schol. Arat. loc. cit.) is described as priestess ei>"Apyei, the
reference is to Tiryns, and that the epic fragment JIw KaWtdtiecrcra (adj.) rests on a mere
confusion.

7 On the Hellenistic Zeus ' HAtos see supra p. 186 ff. Isis was to the Greeks, though
probably not to the Egyptians, a moon-goddess identified with XeX-qv-q : see W. Drexler
in Roscher Lex. Myth. ii. 437 ff.