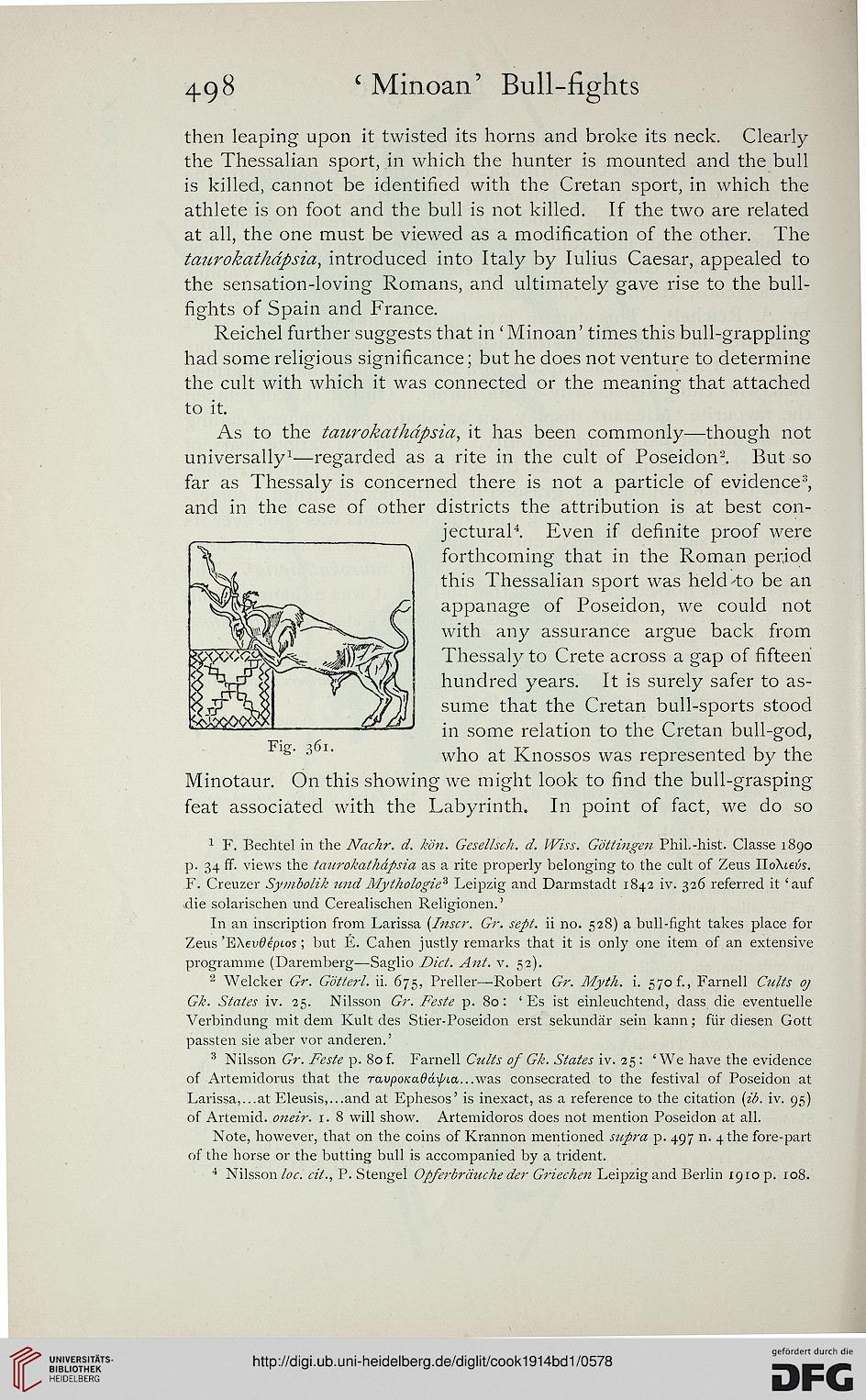 then leaping upon it twisted its horns and broke its neck. Clearly
the Thessalian sport, in which the hunter is mounted and the bull
is killed, cannot be identified with the Cretan sport, in which the
athlete is on foot and the bull is not killed. If the two are related
at all, the one must be viewed as a modification of the other. The
tatirokathdpsia, introduced into Italy by Iulius Caesar, appealed to
the sensation-loving Romans, and ultimately gave rise to the bull-
fights of Spain and France.

Reichel further suggests that in 'Minoan' times this bull-grappling
had some religious significance; but he does not venture to determine
the cult with which it was connected or the meaning that attached
to it.

As to the taurokathdpsia, it has been commonly—though not
universally1—regarded as a rite in the cult of Poseidon2. But so
far as Thessaly is concerned there is not a particle of evidence3,
and in the case of other districts the attribution is at best con-
jectural4. Even if definite proof were
forthcoming that in the Roman period
this Thessalian sport was held-to be an
appanage of Poseidon, we could not
with any assurance argue back from
Thessaly to Crete across a gap of fifteen
hundred years. It is surely safer to as-
sume that the Cretan bull-sports stood
in some relation to the Cretan bull-god,
who at Knossos was represented by the
Minotaur. On this showing we might look to find the bull-grasping
feat associated with the Labyrinth. In point of fact, we do so

In an inscription from Larissa (Inscr. Gr. sept, ii no. 528) a bull-fight takes place for
Zeus "Ekevdepios; but E. Cahen justly remarks that it is only one item of an extensive
programme (Daremberg—Saglio Diet. Ant. v. 52).

3 Nilsson Gr. Feste p. 80 f. Farnell Cults of Gk. States iv. 25 : 'We have the evidence
of Artemidorus that the ravpoKadd^La.. .was consecrated to the festival of Poseidon at
Larissa,...at Eleusis,...and at Ephesos' is inexact, as a reference to the citation (id. iv. 95)
of Artemid. oneir. 1. 8 will show. Artemidoros does not mention Poseidon at all.

Note, however, that on the coins of Krannon mentioned supra p. 497 n. 4 the fore-part
of the horse or the butting bull is accompanied by a trident.