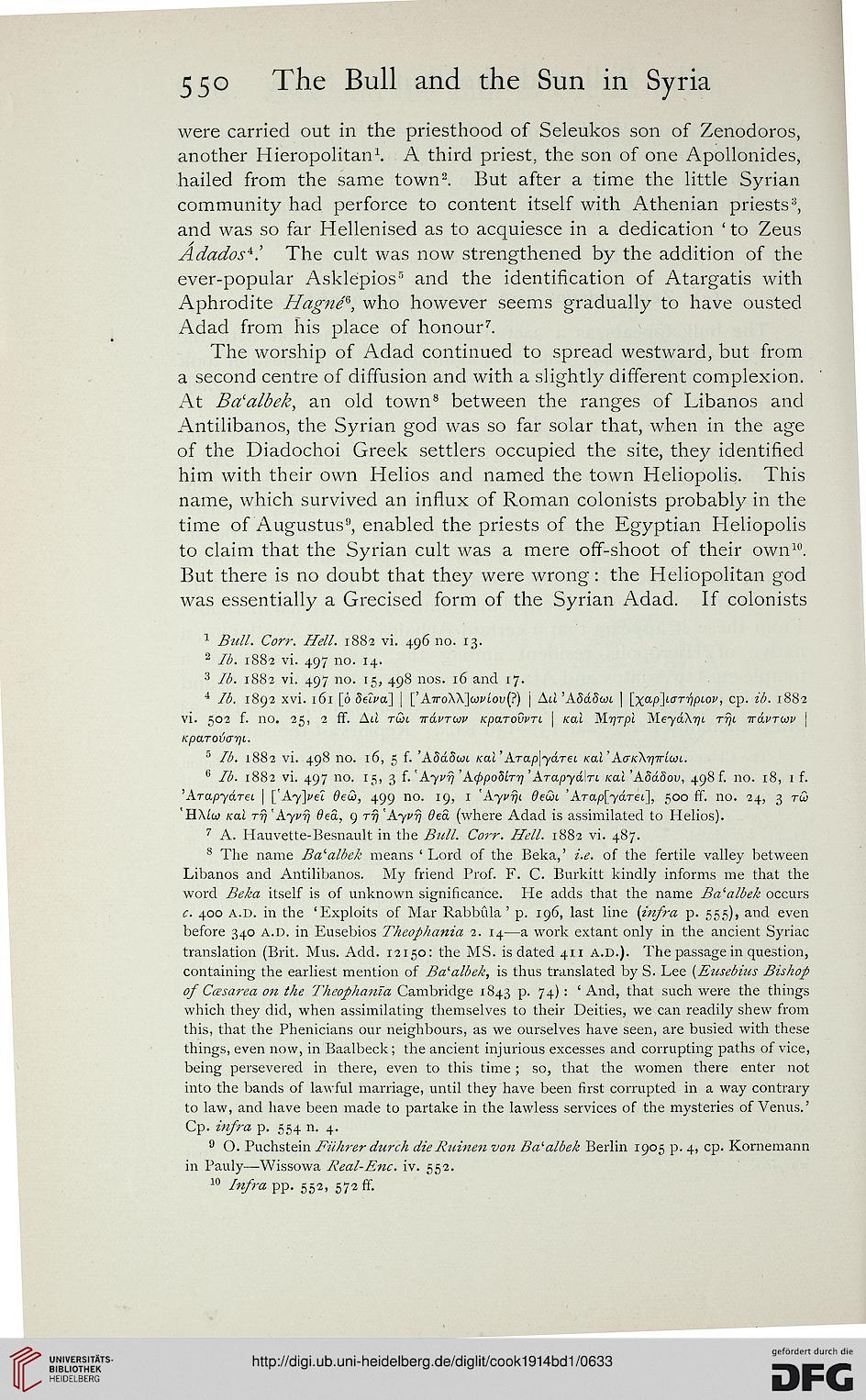 were carried out in the priesthood of Seleukos son of Zenodoros,
another Hieropolitan1. A third priest, the son of one Apollonides,
hailed from the same town2. But after a time the little Syrian
community had perforce to content itself with Athenian priests3,
and was so far Hellenised as to acquiesce in a dedication ' to Zeus
Adados4.' The cult was now strengthened by the addition of the
ever-popular Asklepios5 and the identification of Atargatis with
Aphrodite Hague*, who however seems gradually to have ousted
Adad from his place of honour7.

The worship of Adad continued to spread westward, but from
a second centre of diffusion and with a slightly different complexion.
At Ba'albek, an old town8 between the ranges of Libanos and
Antilibanos, the Syrian god was so far solar that, when in the age
of the Diadochoi Greek settlers occupied the site, they identified
him with their own Helios and named the town Heliopolis. This
name, which survived an influx of Roman colonists probably in the
time of Augustus9, enabled the priests of the Egyptian Heliopolis
to claim that the Syrian cult was a mere off-shoot of their own10.
But there is no doubt that they were wrong: the Heliopolitan god
was essentially a Grecised form of the Syrian Adad. If colonists

8 The name Bcfalbek means ' Lord of the Beka,' i.e. of the fertile valley between
Libanos and Antilibanos. My friend Prof. F. C. Burkitt kindly informs me that the
word Beka itself is of unknown significance. He adds that the name Ba'albeh occurs
c. 400 a.d. in the 'Exploits of Mar Rabbula' p. 196, last line {infra p. 555), and even
before 340 a.d. in Eusebios Theophania 2. 14—a work extant only in the ancient Syriac
translation (Brit. Mus. Add. 12150: the MS. is dated 411 a.d.). The passage in question,
containing the earliest mention of Ba'albek, is thus translated by S. Lee {Eusebius Bishop
of C&sarea on the Theophama Cambridge 1843 p. 74) : ' And, that such were the things
which they did, when assimilating themselves to their Deities, we can readily shew from
this, that the Phenicians our neighbours, as we ourselves have seen, are busied with these
things, even now, in Baalbeck; the ancient injurious excesses and corrupting paths of vice,
being persevered in there, even to this time; so, that the women there enter not
into the bands of lawful marriage, until they have been first corrupted in a way contrary
to law, and have been made to partake in the lawless services of the mysteries of Venus.'
Cp. infra p. 554 n. 4.