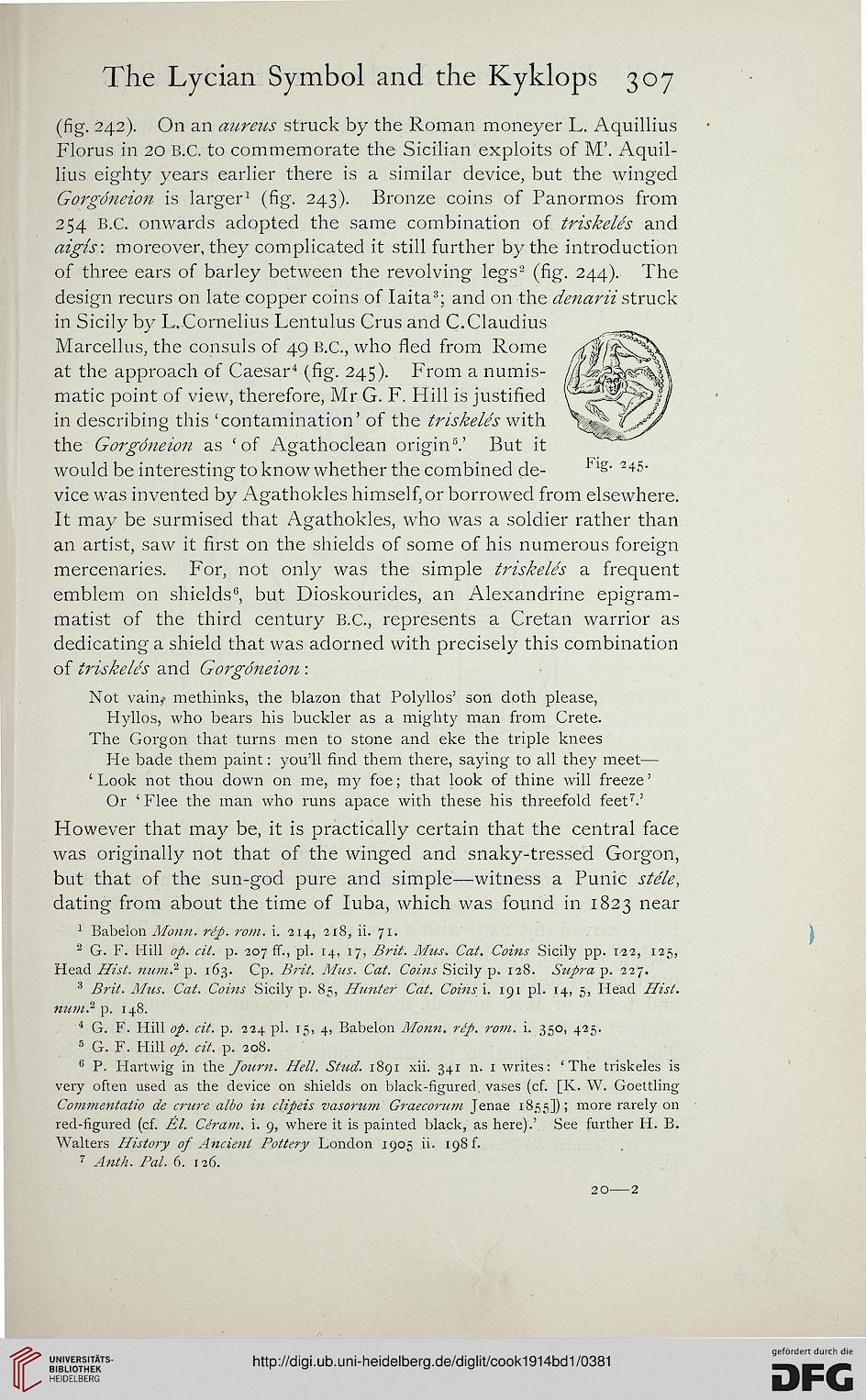 Information about OCR text
The Lycian Symbol and the Kyklops 307

(fig. 242). On an aureus struck by the Roman moneyer L. Aquillius
Floras in 20 B.C. to commemorate the Sicilian exploits of M'. Aquil-
lius eighty years earlier there is a similar device, but the winged
Gorgoneion is larger1 (fig. 243). Bronze coins of Panormos from
254 B.C. onwards adopted the same combination of triskeles and
aigis: moreover, they complicated it still further by the introduction
of three ears of barley between the revolving legs2 (fig. 244). The
design recurs on late copper coins of Iaita3; and on the denarii struck
in Sicily by L. Cornelius Lentulus Crus and C.Claudius
Marcellus, the consuls of 49 B.C., who fled from Rome
at the approach of Caesar4 (fig. 245). From a numis-
matic point of view, therefore, Mr G. F. Hill is justified
in describing this 'contamination' of the triskeles with
the Gorgoneion as 'of Agathoclean origin5.' But it
would be interesting to know whether the combined de-
vice was invented by Agathokles himself, or borrowed from elsewhere.
It may be surmised that Agathokles, who was a soldier rather than
an artist, saw it first on the shields of some of his numerous foreign
mercenaries. For, not only was the simple triskeles a frequent
emblem on shields6, but Dioskourides, an Alexandrine epigram-
matist of the third century B.C., represents a Cretan warrior as
dedicating a shield that was adorned with precisely this combination
of triskeles and Gorgoneion :

Not vaiiv methinks, the blazon that Polyllos' son doth please,
Hyllos, who bears his buckler as a mighty man from Crete.

He bade them paint: you'll find them there, saying to all they meet—

' Look not thou down on me, my foe; that look of thine will freeze'
Or 'Flee the man who runs apace with these his threefold feet7.'

However that may be, it is practically certain that the central face
was originally not that of the winged and snaky-tressed Gorgon,
but that of the sun-god pure and simple—witness a Punic stele,
dating from about the time of Iuba, which was found in 1823 near