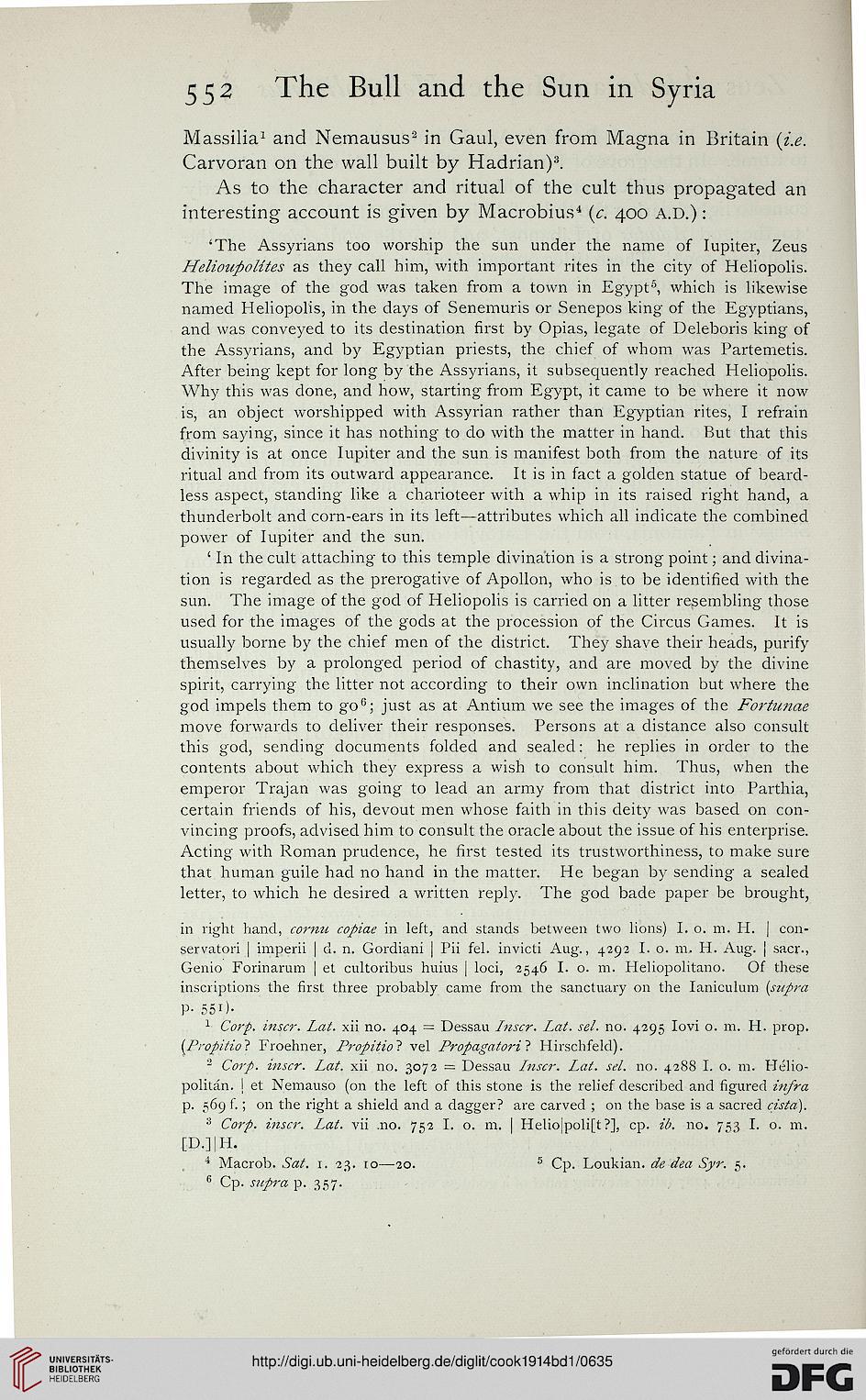 Massilia1 and Nemausus2 in Gaul, even from Magna in Britain {i.e.
Carvoran on the wall built by Hadrian)3.

As to the character and ritual of the cult thus propagated an
interesting account is given by Macrobius4 (c. 400 A.D.):

'The Assyrians too worship the sun under the name of Iupiter, Zeus
HelioupolUes as they call him, with important rites in the city of Heliopolis.
The image of the god was taken from a town in Egypt5, which is likewise
named Heliopolis, in the days of Senemuris or Senepos king of the Egyptians,
and was conveyed to its destination first by Opias, legate of Deleboris king of
the Assyrians, and by Egyptian priests, the chief of whom was Partemetis.
After being kept for long by the Assyrians, it subsequently reached Heliopolis.
Why this was done, and how, starting from Egypt, it came to be where it now
is, an object worshipped with Assyrian rather than Egyptian rites, I refrain
from saying, since it has nothing to do with the matter in hand. But that this
divinity is at once Iupiter and the sun is manifest both from the nature of its
ritual and from its outward appearance. It is in fact a golden statue of beard-
less aspect, standing like a charioteer with a whip in its raised right hand, a
thunderbolt and corn-ears in its left—attributes which all indicate the combined
power of Iupiter and the sun.

' In the cult attaching to this temple divination is a strong point; and divina-
tion is regarded as the prerogative of Apollon, who is to be identified with the
sun. The image of the god of Heliopolis is carried on a litter resembling those
used for the images of the gods at the procession of the Circus Games. It is
usually borne by the chief men of the district. They shave their heads, purify
themselves by a prolonged period of chastity, and are moved by the divine
spirit, carrying the litter not according to their own inclination but where the
god impels them to go6; just as at Antium we see the images of the Fortunae
move forwards to deliver their responses. Persons at a distance also consult
this god, sending documents folded and sealed: he replies in order to the
contents about which they express a wish to consult him. Thus, when the
emperor Trajan was going to lead an army from that district into Parthia,
certain friends of his, devout men whose faith in this deity was based on con-
vincing proofs, advised him to consult the oracle about the issue of his enterprise.
Acting with Roman prudence, he first tested its trustworthiness, to make sure
that human guile had no hand in the matter. He began by sending a sealed
letter, to which he desired a written reply. The god bade paper be brought,