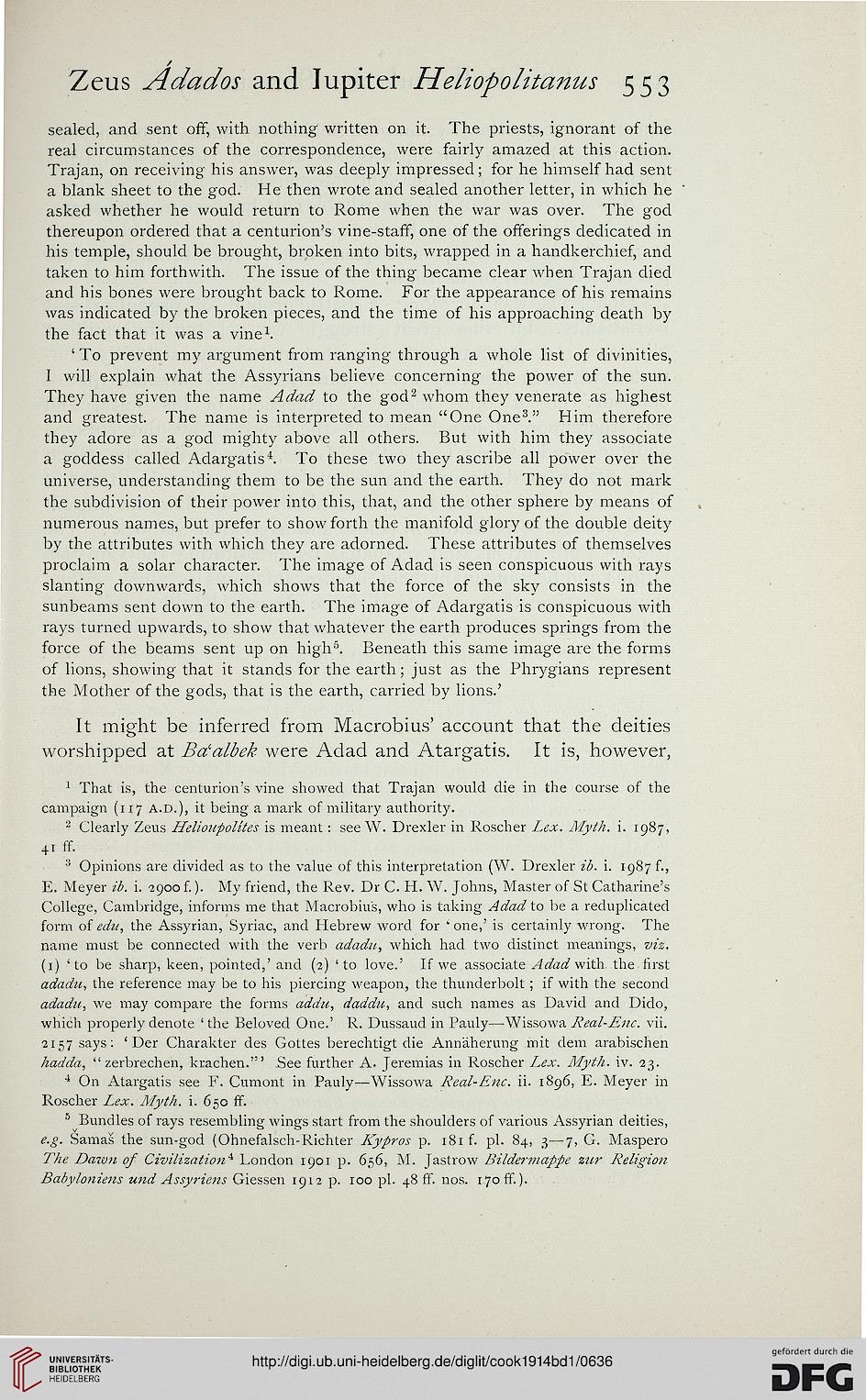 sealed, and sent off, with nothing written on it. The priests, ignorant of the
real circumstances of the correspondence, were fairly amazed at this action.
Trajan, on receiving his answer, was deeply impressed; for he himself had sent
a blank sheet to the god. He then wrote and sealed another letter, in which he
asked whether he would return to Rome when the war was over. The god
thereupon ordered that a centurion's vine-staff, one of the offerings dedicated in
his temple, should be brought, broken into bits, wrapped in a handkerchief, and
taken to him forthwith. The issue of the thing became clear when Trajan died
and his bones were brought back to Rome. For the appearance of his remains
was indicated by the broken pieces, and the time of his approaching death by
the fact that it was a vine1.

' To prevent my argument from ranging through a whole list of divinities,
I will explain what the Assyrians believe concerning the power of the sun.
They have given the name Adad to the god2 whom they venerate as highest
and greatest. The name is interpreted to mean "One One3." Him therefore
they adore as a god mighty above all others. But with him they associate
a goddess called Adargatis4. To these two they ascribe all power over the
universe, understanding them to be the sun and the earth. They do not mark
the subdivision of their power into this, that, and the other sphere by means of
numerous names, but prefer to show forth the manifold glory of the double deity
by the attributes with which they are adorned. These attributes of themselves
proclaim a solar character. The image of Adad is seen conspicuous with rays
slanting downwards, which shows that the force of the sky consists in the
sunbeams sent down to the earth. The image of Adargatis is conspicuous with
rays turned upwards, to show that whatever the earth produces springs from the
force of the beams sent up on high5. Beneath this same image are the forms
of lions, showing that it stands for the earth; just as the Phrygians represent
the Mother of the gods, that is the earth, carried by lions.'

It might be inferred from Macrobius' account that the deities
worshipped at Ba'albek were Adad and Atargatis. It is, however,

1 That is, the centurion's vine showed that Trajan would die in the course of the
campaign (117 A.D.), it being a mark of military authority.

3 Opinions are divided as to the value of this interpretation (W. Drexler ib. i. 1987 f.,
E. Meyer ib. i. 2900 f.). My friend, the Rev. Dr C. H. W. Johns, Master of St Catharine's
College, Cambridge, informs me that Macrobius, who is taking Adad to be a reduplicated
form of edu, the Assyrian, Syriac, and Hebrew word for ' one,' is certainly wrong. The
name must be connected with the verb adada, which had two distinct meanings, viz.
(1) 'to be sharp, keen, pointed,' and (2) 'to love.' If we associate Adad with the first
adadu, the reference may be to his piercing weapon, the thunderbolt ; if with the second
adadu, we may compare the forms addu, daddu, and such names as David and Dido,
which properly denote ' the Beloved One.' R. Dussaud in Pauly—Wissowa Real-Enc. vii.
2157 says: ' Der Charakter des Gottes berechtigt die Annaherung mit dem arabischen
had da, " zerbrechen, krachen."' See further A. Jeremias in Roscher Lex. Myth. iv. 23.