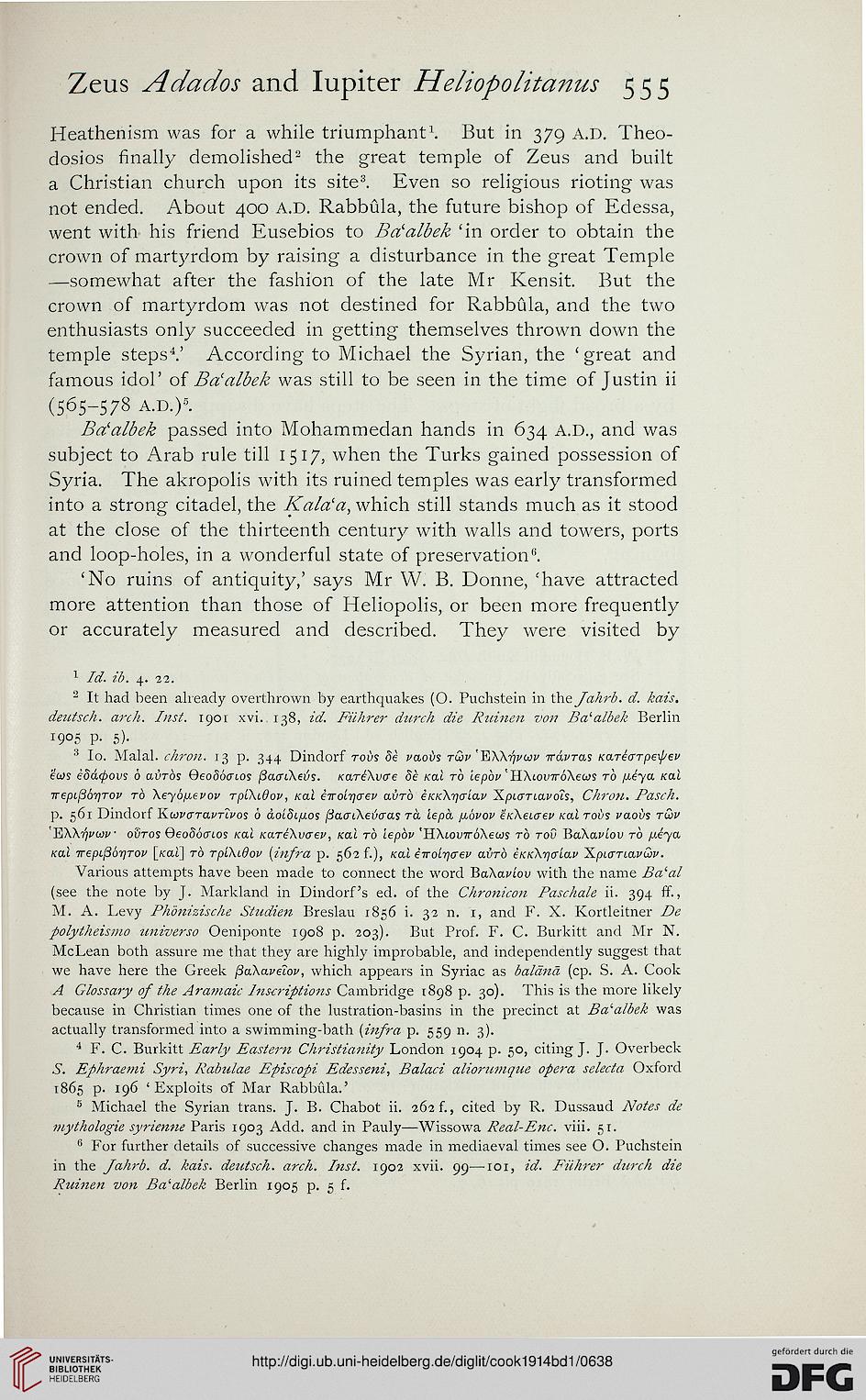 Heathenism was for a while triumphant1. But in 379 a.d. Theo-
dosios finally demolished2 the great temple of Zeus and built
a Christian church upon its site3. Even so religious rioting was
not ended. About 400 a.D. Rabbula, the future bishop of Edessa,
went with his friend Eusebios to Bttalbek 'in order to obtain the
crown of martyrdom by raising a disturbance in the great Temple
—somewhat after the fashion of the late Mr Kensit. But the
crown of martyrdom was not destined for Rabbula, and the two
enthusiasts only succeeded in getting themselves thrown down the
temple steps4.' According to Michael the Syrian, the 'great and
famous idol' of Bctalbek was still to be seen in the time of Justin ii
(565-578 a.D.)5.

Bctalbek passed into Mohammedan hands in 634 a.D., and was
subject to Arab rule till 1517, when the Turks gained possession of
Syria. The akropolis with its ruined temples was early transformed
into a strong citadel, the Kaltia, which still stands much as it stood
at the close of the thirteenth century with walls and towers, ports
and loop-holes, in a wonderful state of preservation6.

'No ruins of antiquity,' says Mr W. B. Donne, 'have attracted
more attention than those of Heliopolis, or been more frequently
or accurately measured and described. They were visited by

Various attempts have been made to connect the word BaAa^t'ov with the name Balal
(see the note by J. Markland in Dindorf's ed. of the Chronicon Paschale ii. 394 ff.,
M. A. Levy Phbnizische Studien Breslau 1856 i. 32 n. 1, and F. X. Kortleitner De
polytheismo universo Oeniponte 1908 p. 203). But Prof. F. C. Burkitt and Mr N.
McLean both assure me that they are highly improbable, and independently suggest that
we have here the Greek fiaXavetov, which appears in Syriac as balana (cp. S. A. Cook
A Glossary of the Aramaic Ins-criptions Cambridge 1898 p. 30). This is the more likely
because in Christian times one of the lustration-basins in the precinct at Ba'albek was
actually transformed into a swimming-bath (infra p. 559 n. 3).