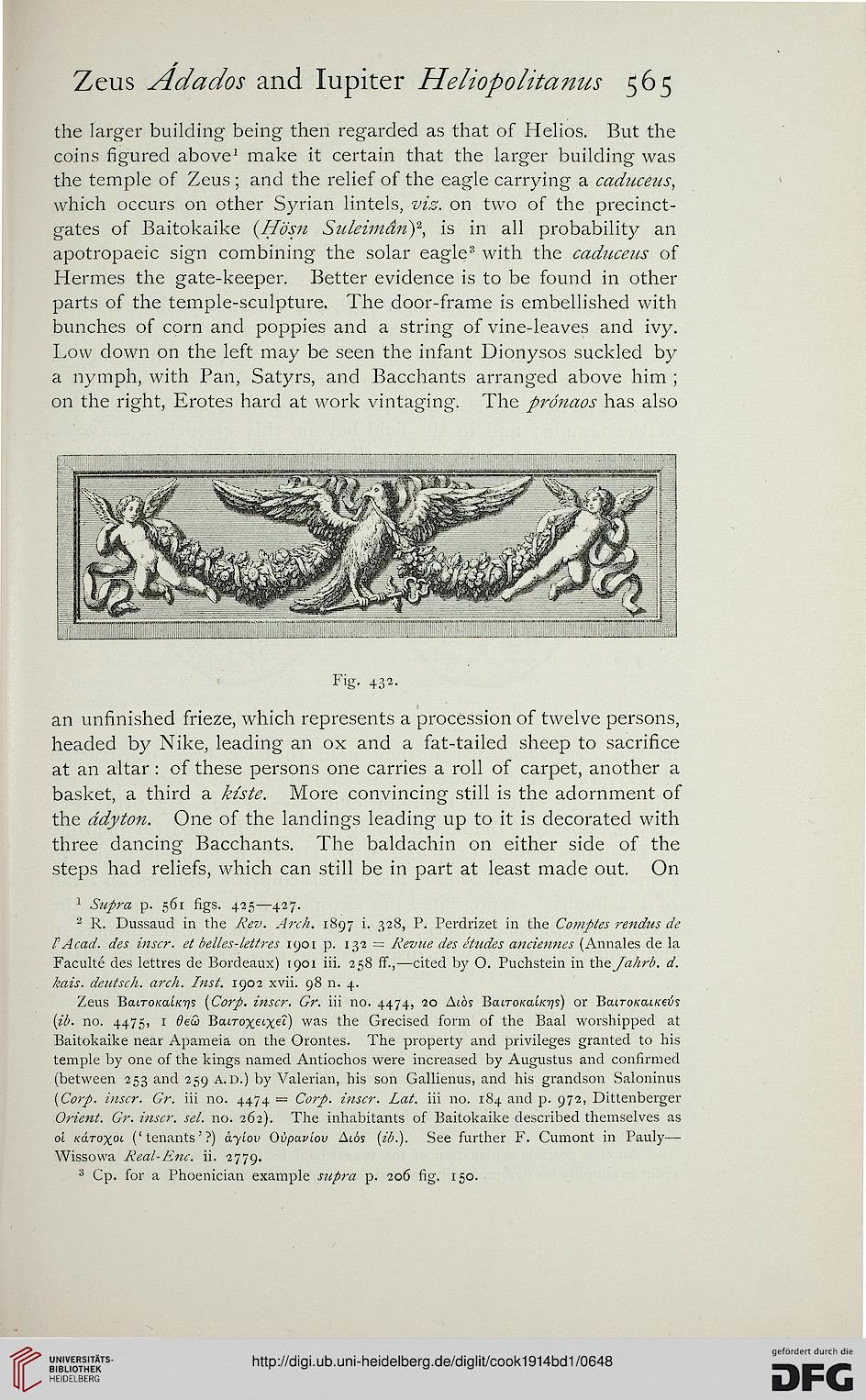 the larger building being then regarded as that of Helios. But the
coins figured above1 make it certain that the larger building was
the temple of Zeus; and the relief of the eagle carrying a caduceus,
which occurs on other Syrian lintels, viz. on two of the precinct-
gates of Baitokaike (Hosn Suleiman)2, is in all probability an
apotropaeic sign combining the solar eagle3 with the caduceus of
Hermes the gate-keeper. Better evidence is to be found in other
parts of the temple-sculpture. The door-frame is embellished with
bunches of corn and poppies and a string of vine-leaves and ivy.
Low down on the left may be seen the infant Dionysos suckled by
a nymph, with Pan, Satyrs, and Bacchants arranged above him ;
on the right, Erotes hard at work vintaging. The pronaos has also

an unfinished frieze, which represents a procession of twelve persons,
headed by Nike, leading an ox and a fat-tailed sheep to sacrifice
at an altar: of these persons one carries a roll of carpet, another a
basket, a third a kiste. More convincing still is the adornment of
the ddyton. One of the landings leading up to it is decorated with
three dancing Bacchants. The baldachin on either side of the
steps had reliefs, which can still be in part at least made out. On

Zeus Bai.T0KaiK7]s (Corp. inscr. Gr. iii no. 4474, 10 Alos Batro/cat/c^s) or BairoKcuKetis
(ib. no. 4475, 1 9eG> Batro%eixei) was the Grecised form of the Baal worshipped at
Baitokaike near Apameia on the Orontes. The property and privileges granted to his
temple by one of the kings named Antiochos were increased by Augustus and confirmed
(between 253 and 259 A.D.) by Valerian, his son Gallienus, and his grandson Saloninus
(Corp. inscr. Gr. iii no. 4474 = Corp. inscr. Lat. iii no. 184 and p. 972, Dittenberger
Orient. Gr. inscr. sel. no. 262). The inhabitants of Baitokaike described themselves as
ol k&toxoi ('tenants'?) ayiov Ovpaviov Atos (ib.). See further F. Cumont in Pauly—
Wissowa Real-Enc. ii. 2779.