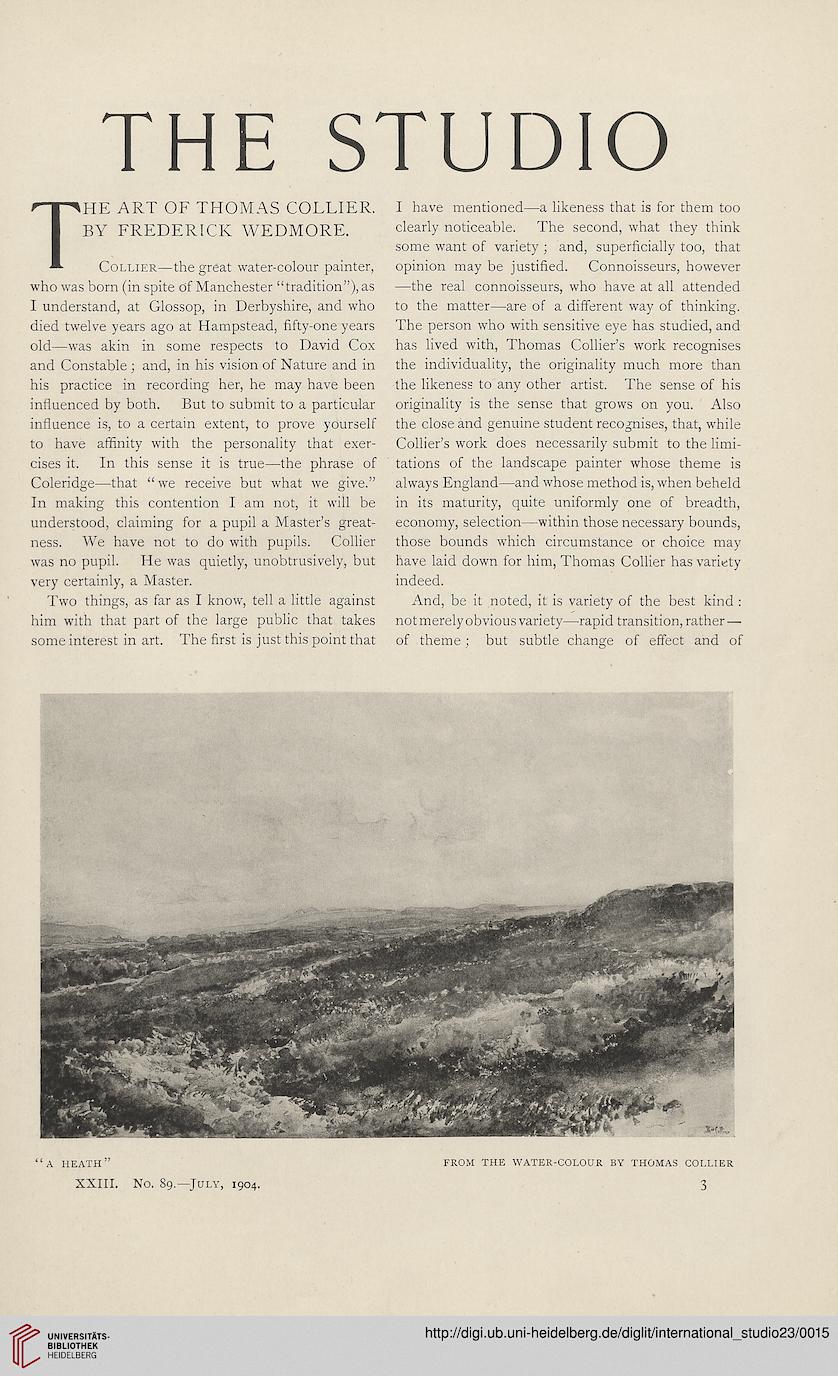 HE ART OF THOMAS COLLIER.
BY FREDERICK WEDMORE.

Collier—the great water-colour painter,
who was born (in spite of Manchester “tradition”),as
I understand, at Glossop, in Derbyshire, and who
died twelve years ago at Hampstead, fifty-one years
old—was akin in some respects to David Cox
and Constable ; and, in his vision of Nature and in
his practice in recording her, he may have been
influenced by both. But to submit to a particular
influence is, to a certain extent, to prove yourself
to have affinity with the personality that exer-
cises it. In this sense it is true—the phrase of
Coleridge—that “we receive but what we give.”
In making this contention I am not, it will be
understood, claiming for a pupil a Master’s great-
ness. We have not to do with pupils. Collier
was no pupil. He was quietly, unobtrusively, but
very certainly, a Master.
Two things, as far as I know, tell a little against
him with that part of the large public that takes
some interest in art. The first is just this point that

I have mentioned—a likeness that is for them too
clearly noticeable. The second, what they think
some want of variety ; and, superficially too, that
opinion may be justified. Connoisseurs, however
—the real connoisseurs, who have at all attended
to the matter—are of a different way of thinking.
The person who with sensitive eye has studied, and
has lived with, Thomas Collier’s work recognises
the individuality, the originality much more than
the likeness to any other artist. The sense of his
originality is the sense that grows on you. Also
the close and genuine student recognises, that, while
Collier’s work does necessarily submit to the limi-
tations of the landscape painter whose theme is
always England—and whose method is, when beheld
in its maturity, quite uniformly one of breadth,
economy, selection—within those necessary bounds,
those bounds which circumstance or choice may
have laid down for him, Thomas Collier has variety
indeed.
And, be it noted, it is variety of the best kind :
not merely obvious variety—rapid transition, rather —
of theme; but subtle change of effect and of

FROM THE WATER-COLOUR BY THOMAS COLLIER