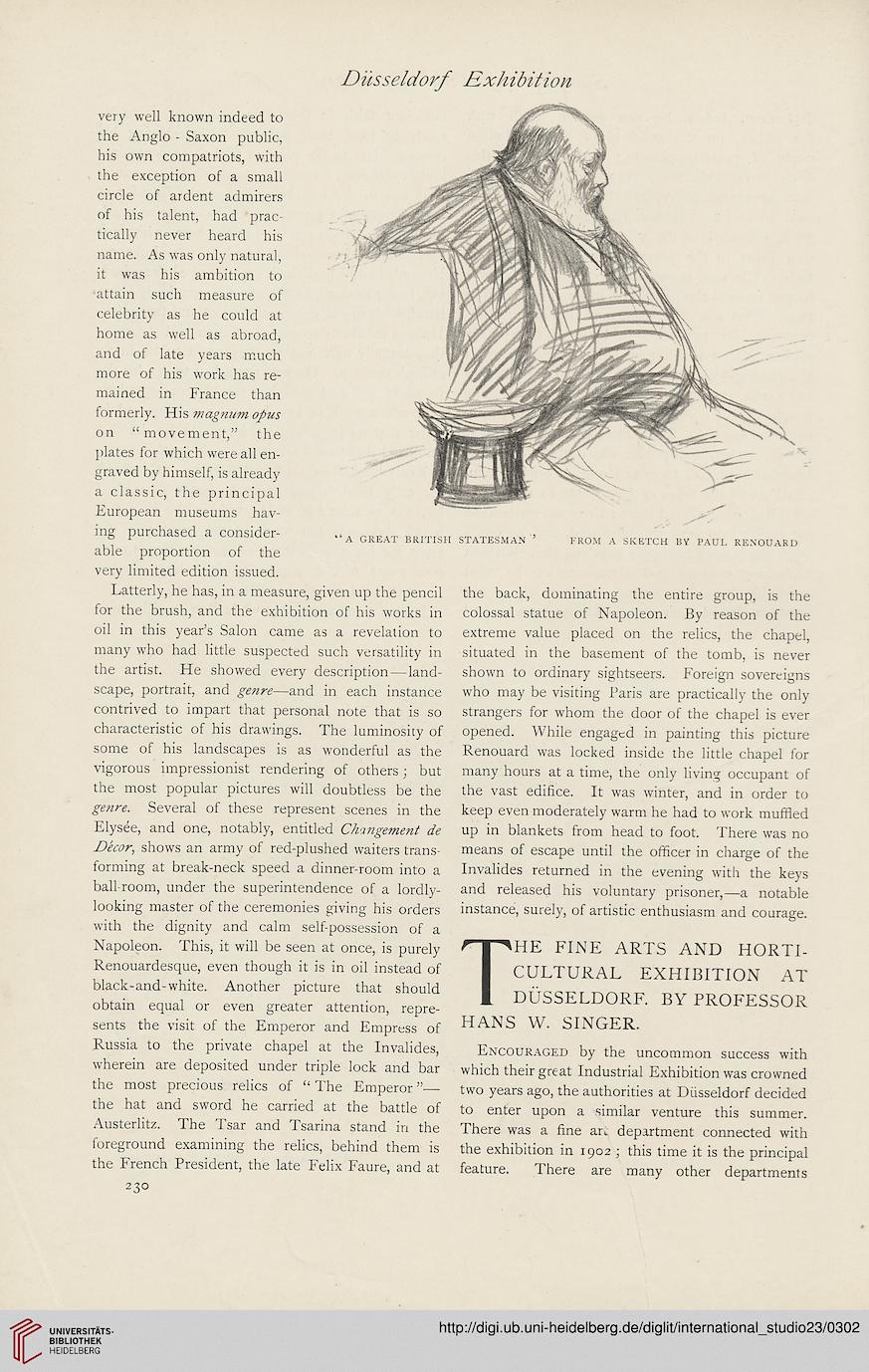 
“A GREAT BRITISH STATESMAN ’ FROM A SKETCH BY PAUL RENOUARD

very well known indeed to
the Anglo - Saxon public,
his own compatriots, with
the exception of a small
circle of ardent admirers
of his talent, had prac-
tically never heard his
name. As was only natural,
it was his ambition to
attain such measure of
celebrity as he could at
home as well as abroad,
and of late years much
more of his work has re-
mained in France than
formerly. His magnum opus
on “movement,” the
plates for which were all en-
graved by himself, is already
a classic, the principal
European museums hav-
ing purchased a consider-
able proportion of the
very limited edition issued.
Latterly, he has, in a measure, given up the pencil
for the brush, and the exhibition of his works in
oil in this year’s Salon came as a revelation to
many who had little suspected such versatility in
the artist. He showed every description—land-
scape, portrait, and getire—and in each instance
contrived to impart that personal note that is so
characteristic of his drawings. The luminosity of
some of his landscapes is as wonderful as the
vigorous impressionist rendering of others; but
the most popular pictures will doubtless be the
genre. Several of these represent scenes in the
Elysee, and one, notably, entitled Changement de
Decor, shows an army of red-plushed waiters trans-
forming at break-neck speed a dinner-room into a
ball-room, under the superintendence of a lordly-
looking master of the ceremonies giving his orders
with the dignity and calm self-possession of a
Napoleon. This, it will be seen at once, is purely
Renouardesque, even though it is in oil instead of
black-and-white. Another picture that should
obtain equal or even greater attention, repre-
sents the visit of the Emperor and Empress of
Russia to the private chapel at the Invalides,
wherein are deposited under triple lock and bar
the most precious relics of “ The Emperor ”—
the hat and sword he carried at the battle of
Austerlitz. The Tsar and Tsarina stand in the
foreground examining the relics, behind them is
the French President, the late Felix Faure, and at
230

the back, dominating the entire group, is the
colossal statue of Napoleon. By reason of the
extreme value placed on the relics, the chapel,
situated in the basement of the tomb, is never
shown to ordinary sightseers. Foreign sovereigns
who may be visiting Paris are practically the only
strangers for whom the door of the chapel is ever
opened. While engaged in painting this picture
Renouard was locked inside the little chapel for
many hours at a time, the only living occupant of
the vast edifice. It was winter, and in order to
keep even moderately warm he had to work muffled
up in blankets from head to foot. There was no
means of escape until the officer in charge of the
Invalides returned in the evening with the keys
and released his voluntary prisoner,—a notable
instance, surely, of artistic enthusiasm and courage.
HE FINE ARTS AND HORTI-
CULTURAL EXHIBITION AT
DUSSELDORF. BY PROFESSOR
HANS W. SINGER.
Encouraged by the uncommon success with
which their great Industrial Exhibition was crowned
two years ago, the authorities at Dusseldorf decided
to enter upon a similar venture this summer.
There was a fine art department connected with
the exhibition in 1902 ; this time it is the principal
feature. There are many other departments